Like a number of things, the start of this seems like yesterday. Was still using Google’s blogging platform back when I came to know, and later meet in person, the blogger otherwise known as the Scientist Gone Wordy. Rachel, one of those names that keeps popping up as I run the course of this life given to me, then living up in the Northern half of California. Found out we shared a love of reading certain authors, as a number of us do across the ether. A simple joy that makes this world seem smaller than it is.

The fact that we were both ‘Craisie’ (distinct fans of author Robert Crais and his characters) was what brought us together. Funny how personas real and imagined, existing uniquely within pages of a book and individuals’ heads can be the cause of camaraderie among strangers. The following serves as my summation of this journey in friendship and collaboration for the special participation we’ve been a part of. Like we’ve done throughout, we’ll again do it in parallel, one last time. For Rachel’s side of the story, please go here:

In May of 2010, with her encouragement, she and I started on a “Duo Post”, a term she coined by the way. From there, a series performing concurrent reviews of books and the movies adapted from them sprung. The first purely a lark, I’m sure, and definitely, I thought, a one-off. Had only been doing this “blogging thing” since Father’s Day of 2008, besides. What the Hell did I know. This would be where I’d look over to my wife and give her my pleading look to not answer that question.

Sixty-four reviews and seven years later…and I’m just a little flabbergasted at it all.

* Also the age Paul McCartney quoted in a Sgt. Pepper’s love song he wrote at age 16 (25% of that number and he the same percentage of the Fab Four).

The numbers tell some of it: 64* side-by-side examinations for each of us, 128 in total, scattered across an electic mix of genres in book and celluloid1 form. Of course, we started slow, but got quite comfortable and consistent with our output. Plus, while we began pretty heavily with Science-Fiction, eventually the series seemed to favor Drama over anything else. This my categorization of the titles, some could be labeled “hybrids”; Angel Heart initially mystery noir with horror elements intertwined, for example. 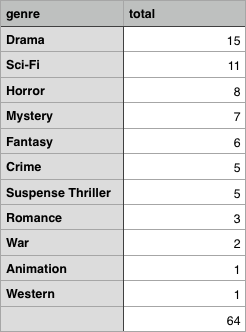 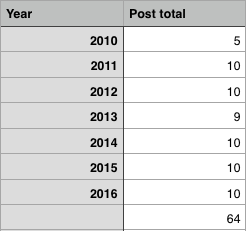 On the author front, a clear favorite was easily determined as both of us had read Michael Crichton’s tech-thrillers. I the one who pushed the writer in second-place, though, probably much to the chagrin of Rachel. Richard Matheson’s varied work in fantasy, sci-fi, and horror were reflected in the course of this series. What might be perhaps more interesting were the group with two titles a piece. Sci-Fi notables Philip K. Dick and Ursula K. Le Guin, with spy master John le Carré and horror-meister Stephen King, as well2.

No less, we sampled a pair of lesser knowns from Elmore Leonard’s noteworthy stack (one each from his crime and western exemplars) and a tandem from our personal favorite, “Bob” (as Mr. Crais let’s me call him, sometimes); the trick here, only one of his novels has ever been adapted to the movie screen — see below for how the two of us accomplished that sleight of hand:

Getting on to what I pretty much specialized in for the series, and referencing movies with their directors. At least the French do it that way, as did I. Once more, a varied group. Most series one-timers, but the obvious and prolific here being the one filmmaker that has influenced both Rachel and I, Steven Spielberg. Still, a diverse cast of head honchos from the significant and award winning, to those who later were arrested (John McTiernan), disparaged (Zack Snyder), or just plain forgotten (Jeannot Szwarc).

Okay, now for the hard part. What I’m sure my Duo Post partner really wanted to get out of me in suggesting we closed out the endeavor by summarizing our distinctions among the books and their screen adaptations. Those titles, reviews, or experiences that were favorites, and the least preferred of the entire series. Grrrrr…okay, here goes, for better or worse:

My favorite reviews for whatever reason 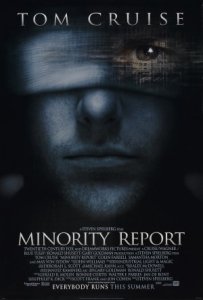 Of course, I have to list the very first one, Minority Report, because it was the first. Yeah, I may have already been writing about movies I loved, but not in way I’d ever have thought as “a review.” Read others I really enjoyed, but doing it myself seemed like the most foreign thing I’d ever partake in. Struggled with the format initially, which I eventually pared down (dropping reviewing the disc itself entirely) in the course of the series. Trying to make it as personal as I could because that’s the only way I could get it done3.

That latter part how I reviewed another title and made it so easy to write, which also was the second horror title we’d done to that point. Rosemary’s Baby, if I’m honest, the kind of review that wrote itself just by looking back on my own family experience — my aunt’s reactions to the novel and the movie (and to their husbands, my uncles, afterward). If only most of the others would have been this easy to put words to. The Princess Bride, too, was much like that; though without the childhood memories. 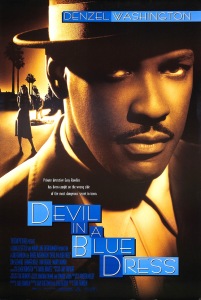 Others I’d include being Jurassic Park, because it was Jurassic Park with Spielberg near the top of the his game. The gritty Get Carter, made easier because I’d already written its 40th anniversary appreciation piece for another blog. Empire of the Sun (Spielberg again, et. al.). As well as The Haunting, inasmuch as the Robert Wise’s distillation of the Shirley Jackson classic can still creep the Hell out of me like nobody’s business. Lastly, delving into my past for Devil in a Blue Dress, which also inaugurated my switch over to WordPress as my blogging platform come 2011.

Without a doubt, Children of Men, a film I didn’t want to revisit — feeling so depressed the first time with it. Looking at the film again, this time more openly, the experience turned me around completely. Meaning, I have Rachel to thank for that since she picked the title. Same goes for a film that doesn’t exist in this universe, Free Fall. Again, my partner pushed for this and I had to come up with a mythical movie to review as a purely creative exercise for our preferred author (while she got to actually review Crais’s sold-short Elvis Cole/Joe Pike novel).

A bit surprised with The Constant Gardener, as well, as I didn’t have an inkling to see it4, and switching places altogether with Rachel the one time when I wrote the book review for James Sallis’ Drive novel while she took on the Nicolas Winding Refn film adaptation.

The following dogged me for days, maybe with a little dread, even drawing a few drops of blood in the process, right up till they were published, for whatever reason (writer’s block, stomach indigestion, feelings of total inadequacy…you name it):

Reader suggested titles of the series

Have to say, the last two of the series’ seven years experimented by having our readers suggest and vote in a few of the titles we’d review worked out better than expected. Both of the survey poll results I ended up quite happy with. To read (or revisit) the book or graphic novel, then watch the film the studios had condensed and appraise it anew brought forth more than a few smiles. Not one failed to please5, and I had thought there was a good chance of it doing otherwise. Oh ye of little faith…

My favorite set of reviews from any year

Hardest question I could have asked, I think, and am going to say…after much consternation and handwringing… it’s 2011‘s (I have no “least”, so there).

My Favorite and Least Favorite Titles We Each Picked 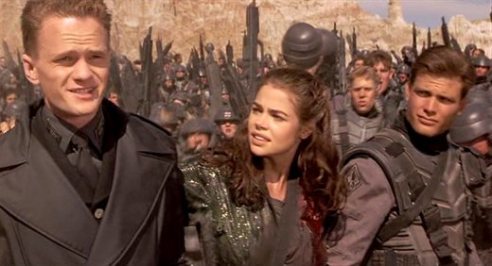 For those interested, here’s the whole lot by year:

If you have anything to add to this dear readers (Rachel included), please do so in the comments, and thanks, as I could not have done it without you.

17 Responses to “Seven Years in Parallel – A Series Summation”