With the upcoming L.A. Times Festival of Books right around the corner, it means springtime is here in the southland. No wonder I feel so freakin’ poorly now. My allergies are making life the other side of miserable (the plentiful winter rains all but guaranteed a bumper pollen crop for us Angelenos). Los Angeles weather, while it can be wonderful, is equally unpredictable, at times. Especially as it settles into a new season. Last weekend has been cool, even misty — this week the 80s will be back. But I digress…

Once again, it’s time for the blogger otherwise known as the Scientist Gone Wordy and I to add another of our duo posts in the series we started last year. This time, we took advantage of the book fest timing and a novel/film pairing many of us ‘Craisies’ hold in cringing affection. As usual, the wordy one will look at the text of a famed novel later adapted to film, which I will review. In this case, she’ll be looking at the 1993 source crime novel and Edgar Award nominee from famed author Robert Crais for the 1997 film adaptation, Free Fall. Rachel’s book review can be found here:

A brief synopsis of the film: Elvis Cole is back! While the L.A. private detective still hasn’t unpacked his bags from his earlier New York escapade, he drops by his West Hollywood workplace to pick up the load of old mail that’s piled up. There, a tentative young woman appears at his office door looking for a savior. Jennifer Sheridan wants Elvis to investigate what’s troubling her fiancé, a plainclothes LAPD officer working for an elite gang unit. She’s convinced something is wrong and that he’s in danger, and won’t accept the circumstantial evidence that her high school sweetheart is having a dalliance with another woman. What Elvis, and his laconic partner Joe Pike, find in this probe will put them up against corrupt cops, a lethal street gang, and murder charges.

Where do you begin with a film like this? Yes, it’s got all the expected trappings of a notable film franchise: good-looking Hollywood actors portraying now well-known literary figures (Robert Crais has seen to that through his novel series), famous Los Angeles locations, and a story that takes into account some real law enforcement history in LaLa Land circa mid-90s. However, since this was essentially one of the first re-boot‘s ever of a failing film series, I don’t think you can review this picture without some perspective to what’s come before. When Michael Connelly rolls his eyes when asked about that now infamous third film flame-out of his friend’s series (his release of The Lincoln Lawyer adaptation notwithstanding), you know things must have gotten pretty out-of-hand.

Back in ’87, Robert Crais’ debut novel, The Monkey’s Raincoat, made a splash on the mystery book scene. But, only when his second novel arrived, Stalking the Angel, helping to establish his character’s popularity in 1989, did studios came a callin’. Given the author’s history as a contract writer (Hill Street Blues, Cagney & Lacey, and Miami Vice, among others) and TV producer, he was hesitant to option his characters to any Hollywood studio. Then that horse’s head in the bed incident was reported in The Star, and the rest was history. ‘Option’ City, baby! The film adaptation for The Monkey’s Raincoat was a surprise hit in early Spring 1991, with Kurt Russell and Sam Elliott grabbing everyone’s attention as Elvis Cole and Joe Pike, respectively (some say their later re-pairing for 1993’s Tombstone was credited to that earlier film).

The studio quickly ramped up the production of the next novel in the series for a 1993 release. Kurt and Sam were lined up again for the sequel, this time producers re-titled the second adaptation Stalking the Yakuza (heavens yes, we all know films involving Japanese organized crime in L.A. always works). It produced similar box office in the Fall of that year. However, trouble was brewing (if you go with what the tabloids were writing at the time). “Joe’s got a bigger gun than I do.”, this and, “Cole gets more lines.”, that. Typical. And since Hollywood bigwigs thought they could easily re-equip this ‘buddy team’ for a big summer release, as they usually do, studio execs began making changes. Out went the then little known director (Curtis Hanson), along with author Crais as co-producer, plus the feuding leads. In came Joel Schumacher (who, years later, would be entrusted with  continuing Tim Burton’s Batman franchise) to write/direct, along with two new lead performers, for the third movie.

The next novel in the series, 1992’s Lullaby Town, was re-christened New York Dreams (?!?) for the 1995 adaptation, not to mention Robert Downey, Jr. and Val Kilmer lined up as the new Elvis and Joe. To say it was an unmitigated disaster would be kind. Let’s express it another way. The depth-charge this calamitous production turned out to be, and how the movie laid waste to Robert Crais’ characters, caused almost the same amount of fan venom as was directed toward Brett Ratner and his destruction upon the X-Men series. What had to be the most lasting and hated symbol for Crais aficionados for this ill-conceived hubris was this shocking revelation from the film: Joe Pike’s nipple ring. It still makes my head hurt to envision it. Although, to be fair, Downey and Kilmer did exhibit some rapport in their short-lived stint together: 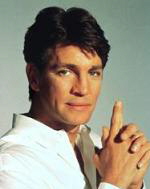 So with that, we come to the notorious re-boot and Free Fall. Obviously, the new filmmakers (this time the French, since they’ll make any crime novel U.S. film producers won’t touch) desperately wanted to return to what worked before. Well, almost. Newly hired William Friedkin (replacing Phil Kaufman, and at the time attempting to rebound his directorial career from his post-David Caruso, Jade film period) rose to the challenge. He even found a way to inject an exciting car chase through downtown L.A. into the story (though it wasn’t in the original novel). Oh, well. That stunt sequence remains spectacularly thrilling and the best thing in the film, however. The more austere film budget, besides, necessitated the real controversy to come out of this restart venture. Meaning, Eric Roberts as Elvis Cole and Jeff Fahey as Joe Pike. I know it sounds like something made for a direct-to-video release, but it was better than you’d expect from that duo.

As well, the noted film writer John Milius performed a decent job at a tailoring this Elvis & Joe novel to the screen. Though, as my friend Corey Wilde once described, “…the early books, [are] full of a wisecracking Elvis and deadpan – and deadly – Joe Pike” plotting, the fourth novel’s look at L.A. inner-city crime and police corruption during the tempestuous 90s was perceptive in its observations and writing, nonetheless. Free Fall has been underrated by some crime novel fans or thought of as just simple genre entertainment by other readers. Coming back to it more than once, though, shows it’s more than that. At least, for me. Milius held to most of the novel’s storyline in his script. It should be noted, director Ron Shelton would mine similar ground, using a James Ellroy story, with his criminally undervalued Dark Blue film in 2002 — ironically, starring the first (and still the best, IMO) Elvis Cole, Kurt Russell. Along with Ving Rhames, who co-starred as Ray Depende in this film.

Ultimately, was Free Fall a good film? Given what Hollywood often does to the source material in fashioning a book to film — I mean, who’s inane idea was it to change Elvis’ ill-tempered cat to some flatulent pot belly pig, anyhow? — it can be a mixed blessing at best. As it was here. Most would think having Elvis Cole and Joe Pike in the movies would be a good thing. Given the results though, I’d say this film is a good example of what can come of a prized book series reworked to motion pictures. Most of the time, the characters and stories transform into something different entirely for filmmakers (and audiences) than what the readers have come to know, and cherish. It’s rare the author’s original story concept or spirit remains intact. But, who am I to judge? And, who can blame the novelist for giving in to a boatload of money and optioning his series? Because of this, I hear Mr. Crais has since relocated to Santa Catalina Island and now works with his unofficial charity, the Albacore Club, in between writing his next novel.

Now, just don’t get me started on the casting of Lucy Chenier in that Voodoo River film monstrosity…

Bloggers note: if you haven’t figured it out yet, this review is entirely a work of fiction (and a creative way of naming many of my film favorites… and a couple of my movie scoundrels). I credit my partner Rachel for suggesting it as an amusing way to apply the novel/film post dynamic to a Robert Crais novel that’s never been re-worked for film. In real life, as Wikipedia observes,

“Crais refuses to sell the rights to Cole, Pike, and his other recurring characters, preferring to allow his readers to keep their own personal conceptions of the characters.”

And we, his fans, are thankful for that.