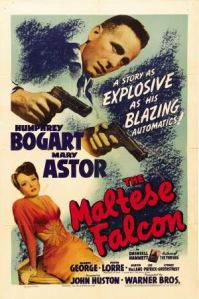 The year 2012 is barely here, but as I look up at the calendar the damn thing tells me that January is coming to an end… already. Criminy! So, I mustn’t waste time. For those new to this site, this means the blogger otherwise known as the Scientist Gone Wordy and I are again restarting a certain practice of ours, following our end-of-year holiday break. Back in 2010 (why does that seem so long ago now?), we began a series of duo posts, though the credit for the idea (and the string of posts) was Rachel’s. In parallel reviews on our blogs, each of us per month would examine a noted book and its later film adaptation. Traditionally, my northern California colleague reviews the novel. “Why“, you ask? She’s good at it. Plus, she not only does this for her blog, but for the San Francisco Book Review and the City Book Review. I perform the film review duties in this partnership. Not that I’m any good at it, but because I’m such a sloooowwwww reader. For this inaugural pair, we will return to the ranks of a classic. Meaning, the oldest book and film pairing for we’ve ever done in this arc of blog posts.

We’ll examine plausibly the most famed detective novel there is. So glad there won’t be any pressure associated with this one. In this case, my colleague will be looking at the best known work by author Dashiell Hammett, The Maltese Falcon. The 1930 novel also sourced its most famous transference to film, which was released in 1941. Rachel’s book review can be found here:

The Maltese Falcon by Dashiell Hammett

A brief synopsis of the film: in San Francisco of ’41, the detective agency of Sam Spade and Miles Archer take on a seemingly straightforward case of locating the sister of the woman who has just walked through their front door. The beautiful Miss Ruth Wonderly has come seeking help in shadowing a man by the name of Floyd Thursby in hopes of finding and drawing her young sibling away from his nefarious clutches. The less than chummy partners agree to take on the case, and of course the high retainer proffered. Archer, the more titillated toward the comely client (and less smart) of the two, eagerly volunteers to start the trail that very evening. When his dead, gunshot body is found that night by police, Spade is called down to the crime scene and questioned. Thus begins the hardboiled P.I.’s search for his associate’s killer and the reason behind it all. He’ll find a perfumed grafter named Joel Cairo, a fat man name Gutman, a pretty woman he can’t trust, and an ancient treasure piece worth murdering for in his trek.

Brigid O’Shaughnessy: “I haven’t lived a good life. I’ve been bad, worse than you could know.”
Sam Spade: “You know, that’s good, because if you actually were as innocent as you pretend to be, we’d never get anywhere.”

For the longest time, beginning in the 70s after first catching it on TV, The Maltese Falcon was my favorite Bogart. Hell, it was my favorite film, for that matter. In both cases, that fact lasted only a few years — till I finally watched Casablanca, that is. But, that takes us away from what is at hand. The Maltese Falcon was, and still is, the epitome of what was the detective mystery on film in that era. Of course, we have to credit author Dashiell Hammett foremost with putting pen to paper and recalling his ‘Baghdad by Bay’ days as a private detective working for the Pinkerton Detective Agency. However, the film has achieved more than just that. Certainly, enough to make it legendary. Let’s count off a few, shall we?:

I have to say, it’s pretty intimidating to review a certified piece of motion picture history with this film, one that I hold in high regard. I feel there’s no way I’m not going to give it proper justice in whatever I say, and will only embarrass myself in the process, to boot. The Maltese Falcon has been examined to no end, and by those who know a hell of a lot more than I. So, don’t expect anything too deep or insightful here. I guess the only things I can offer are what I genuinely appreciate about the film as a movie-goer.

First, this film is one of those rare masterpieces successfully brought to the screen by a first-time director. John Huston was barely mid-30s when he accomplished this. Lofty company, indeed. Like the tale of the black bird, there are a few, well-known feature films that meet the same criteria. Orson Welles for Citizen Kane, Charles Laughton’s Night of the Hunter, and Sidney Lumet’s 12 Angry Men certainly make the list. A few of us think George Romero’s Night of the Living Dead and Quentin Tarantino’s Reservoir Dogs also qualify. That Citizen Kane and The Maltese Falcon, arguably the top two, came out in the same year makes them the most venerated in that elite group, I think.

The other significant feat is that this film was the third at-bat for adapting Hammett’s story to the screen. The charm, I suppose. Some have argued that the first, Roy Del Ruth’s 1931 film starring Ricardo Cortez and Bebe Daniels (as Spade and the crooked O’Shaughnessy, respectively), was the more faithful since it was pre-code. Hammett’s story was surprisingly risqué, and some undistorted aspects were incorporated into the earlier picture. However, even though it was shackled by the Hays code ten years later (we’ll jump right over the 1936 adaptation, Satan Met a Lady, as it takes the story into light-comedy) Huston’s The Maltese Falcon still presents the tale with all the bravado, style, and mood the others simply don’t approach (just with a bit more innuendo to placate the censors).

“My guess might be excellent or it might be crummy, but Mrs. Spade didn’t raise any children dippy enough to make guesses in front of a district attorney, and an assistant district attorney and a stenographer.”

You can see, just by watching it, why the film hits the mark. At a 100 minutes, it packs a lot in it relatively short length. The lead private detective character is thrust into a murder mystery inside of ten minutes. Not to mention, saying the plot is labyrinthine (with its feints and double-crosses along the way) is an understatement. Yet, it’s not so much trying to deceive the audience rather than challenging them to keep up with what’s going on. Plus, Humphrey Bogart was tailor-made for role (even though physically he didn’t fit Hammett’s description of the P.I. from the novel). Though charismatic, his Spade could still be just as big a prick, too (having an affair with your partner’s wife, no matter how bad a husband Miles was, certainly qualifies), and a bully at times (just ask Cairo and the ‘gunsel’ Wilmer if that wasn’t true). But, he’s definitely no one’s sap. 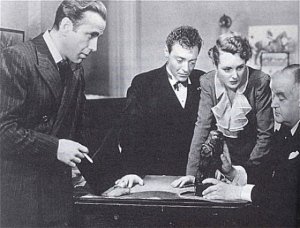 Unquestionably, Sam is shrewd enough to piece it all together, even if it costs him the woman he loves (one of the hallmarks for film noir, btw). The small but stellar supporting cast is the clinching aspect that separates the 1941 version from the others. I mean, Mary Astor, Peter Lorre, Sidney Greenstreet, Gladys George, and Elisha Cook, Jr. made the type of impression that’s become part of the landscape in the foggy City by the Bay with their roles. As with Bogey, they delivered Hammett’s gritty words with the telltale manner than would become a trait for a John Huston film. Tough, cynical, but in no way indifferent. And, it became a dream cast by pure happenstance. You could say they benefited indirectly by actor George Raft. He to all intents and purposes made a career of turning down what became some of the best roles of the era. This film, High Sierra, Casablanca, and Double Indemnity could have been his, but weren’t. Who can argue against the results, though?

The Maltese Falcon has demonstrated in over 70 years time why it has remained popular among movie fans and the yardstick all other detective films are measured against. It accomplished all that through the splendid adaptation of a source story that became the archetype, a bounty of style, and an economy of production that still encased so much into it that many modern filmmakers should study, and study well. Just about everything in noir emanates from this film. A wisecracking P.I. sexually drawn to a femme fatale, men with guns, and oh yeah, a Dashiell Hammett story that famously utilized the MacGuffin plot twist to its unexpected finale. Let’s not forget the film’s cinematography, with its low angle view onto the characters, continues to give this one a distinct look that stood the test of time and marked it as something special. All this, and an anti-hero for the ages that played divide and conquer among the guilty, and all for the sake of upholding his own code of ethics. While it may be cliché to say, quite simply the film remains the “… stuff that dreams are made of.”