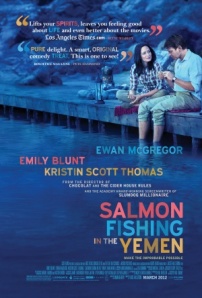 The blogger otherwise known as the Scientist Gone Wordy and I return for another round in this parallel post series that has taken a life of its own. Given that some novels and movies are not readily available to my colleague in parts of the southern hemisphere, the tandem we were to have done this month had to be changed. We decided to go with something neither of us had seen or read.

The 2007 novel by Paul Torday, the intriguingly titled Salmon Fishing in the Yemen, was that choice. She with the author’s text, which won the Bollinger Everyman Wodehouse Prize and Waverton Good Read Award in subsequent years after its release, and I taking a gander at its 2011 film adaptation. Rachel’s book review can be found here:

Salmon Fishing in the Yemen by Paul Torday

A brief synopsis of the film: Fishery expert and civil servant Alfred Jones receives an email from financial advisor Harriet Chetwode-Talbot seeking his assistance on a project. One to bring salmon fishing to the Yemen. An almost laughable endeavor, if it wasn’t already bankrolled by a wealthy Yemeni, Sheikh Muhammad. So when the British government gets wind of this, via Press Secretary Patricia Maxwell, for needed good news from a region in the midst of conflict that doesn’t involve the military, or explosions, his path is set for him. Whether he thinks it’s feasible or not. He’s not exactly being held back by his less than passionate, sterile married life. Maybe, something will happen. The sheikh certainly believes in it, and in the two people he’s employing to bring a miracle to his country.

“When things get tricky in my life, I talk to my fish.”

Honestly, I didn’t know to what to expect from this novel and its film conversion. Truth be told, I think I’ve only fished once, and was not of my choosing. Later, the family I married into bore a striking resemblance to a few here flitting across the pages and rivers the story meanders through. I think at one time, they thought to convert me. Make me one of them. Yeah, about as liking as salmon fishing along the Wadi Dahr.

This is the type of film most who admire romantic comedy find as ‘charming’. Adjective, defined as pleasant or attractive, if you look it up. The dictionary uses the following as an example:

“He was a charming, affectionate colleague.”

You can see the drift of what’s coming, I’m sure. The Swedish director Lasse Hallström and his screenwriter Simon Beaufoy (another Slumdog Millionaire award-winner) received credit for bringing about a ‘breezy’ adaptation of Torday’s satiric novel, just with a lot less satire. And maybe without some of the smartly disguised criticism of his country’s conduct in an unpopular middle-eastern war, or people’s social manners in this day and age.

That may sound a bit harsh, and I don’t mean it to be. The film has some great things going for it. The cast especially. The lovely Emily Blunt, the consistently good Ewan McGregor, and Kristin Scott Thomas chewing scenery with the best of them as a political insider who might be a tad less extreme a mother than say her Crystal persona from Only God Forgives. But, that just may be me, as this line illustrated when speaking to her hoodie wearing teen:

“Don’t you suck your teeth at me, young man.  I’m not one of your bitches from the Baltimorlow Rises, you feel me?  I’m your fucking mother.”

I may have enjoyed Torday’s novel a bit more than my colleague, one that looked at politics (on the international stage and at a personal level) through satire via a big ambitious project, one financed by loads of money, patience, and the unlikely element of faith. Both brought about by an extraordinary individual, Sheikh Muhammad (wonderfully portrayed by the charismatic Egyptian actor, Amr Waked in the film).

And reading the book right before seeing the movie may have cursed me.

I shouldn’t be critical. Some of the best book adaptations for the screen (The Dead Zone, Jackie Brown, and Jurassic Park, for example) changed the story around to condense aspects or improve the narrative to better fit a two hours or less format. Yet, they kept the spirit, so to speak. They tried it here, but to mixed results. Making Dr. Jones deal with Aspergers Syndrome rather than just stilted personality for one, Harriet only a semi-serious girlfriend to a British soldier sent on a black op instead of his fiancé another.

Oh, and change Peter Maxwell, the insufferable prime minister’s director of communications, into a Patricia. The last perhaps being its most inspired.

“That should do you for awhile.” ~ Alfred’s wife Mary, or what not to say after lovemaking

While the film, like the book, was not really about fishing, this adaptation did lack something. Oh, sure, I was attracted to the leads, the cleverness of their typed words visualized on the screen alongside the faces of the character typing them a nice touch, you still had to keep the essence of the story intact. And the filmmakers, or studio execs, just had to push on to the audience a happier set of circumstances than what the novelist imagined. It’s something we’re seen too often by corporate studios.

You pays your money, whether in romantic comedy or horror, the bodies have line up just so. It’s expected, and safe. 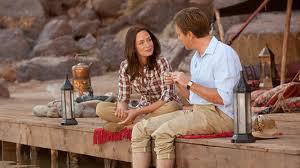 Again, I must admit Torday’s tale came off considerably more realistic, yet strangely unsatisfying to this reader. The movie watcher in me could read the rom-com signs Hallström was telegraphing, byway of the changes instituted to the script, a mile off. And there lies the primary problem. As enjoyable as some of this was, the cinematography by Terry Stacey particularly well done (chiefly Scotland and Morocco standing in for Yemen), it’s too forced, ultimately.

The supporting players performed capably, don’t get me wrong. Alfred’s wife Mary (Rachael Stirling) mainly, and Captain Robert Mayers (Tom Mison), even though they were scant shells of their literary counterparts (Mary being one of most well-mannered shrews I’ve had the pleasure ever to truly hate on a page). Of course, if you’ve not read the novel, the film can be an unexpected tale of patience and love, with some pretty damn attractive people from that side of the pond reeling you in.

Salmon Fishing in the Yemen, being a character-driven story, tried its earnest best to bring two of them into nice focus care of an unanticipated yarn of men wading into the water for fish with no right be there, even with a wealthy, well-meaning third as the visionary. Whilst I would watch it again, somewhere down the line, the film did not entirely work for me.

Wonderfully done when the film attempted satire, care of Scott Thomas when her character careens screaming and swearing onto the screen, Lasse’s adaptation could not pull if off often enough. Mostly, as it tried to be rom-com comedic, too. The film’s dramatic elements may have played better if it adhered closer to the original story. But since that destined bringing death into the mix, or the distinct possibility these two would not get together by the final curtain, that was not meant to be. No matter whose vision.

16 Responses to “Salmon Fishing in the Yemen Film Review”