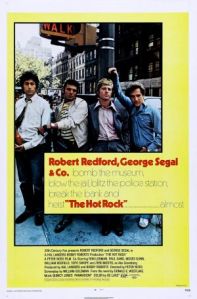 A brand spanking new year, 2013, and we’re already one month down. Almost. The last day in January means it is time once more to restart the parallel post series. If you’re new to this, that’s when the blogger otherwise known as the Scientist Gone Wordy and I take on a pair of literary and cinema works that share an interconnection. Traditionally my colleague Rachel will examine and review the text of a novel later adapted to film, which I will critique. For this month, the wordy one will examine the first novel in a series by the prolific and very much celebrated American crime writer/novelist, the late Donald E. Westlake.

His 1970 book, The Hot Rock, introduced the unique character of one John Archibald Dortmunder to readers. As he once described him, “That’s what I want, an action hero with something wrong with him.” Of this, there can be no doubt. I’ll look at its similarly titled film adaptation which debuted forty-one years ago this month. Rachel’s book review can be found here:

A brief synopsis of the film: Only recently released from a stretch in prison, John Dortmunder somehow seems to attract only those kind of job offers that got him incarcerated in the first place. Of course, there’s a reason for this. The man has a master criminal’s mind. A sheer genius for planning heists, in fact. Just the unluckiest. So when his brother-in-law comes to him with an undertaking to steal a gem from a New York City museum for an African diplomat, what could possibly go wrong? Plenty. How Dortmunder and his crew deal with a stone that just doesn’t want to be had is the gist of the story.

“You sure you guys got the right place?”

Almost five years ago, one of the first bloggers I began to read online, a guy who wrote some marvelous book reviews, Corey Wilde, kept on about the writing of someone named Donald E. Westlake. Who was this guy, I thought? Donald, not Corey. The latter soon became one of the first people I befriended on the inter-tubes. The former created one of Corey’s favorite literary characters. John Dortmunder, or just Dortmunder. It was only later that I discovered I’d already come across this persona in a film decades ago. The same year I graduated high school. Or that Westlake was responsible for the adapted screenplay to a favorite film of mine — one of the great neo noirs of recent time.

The Hot Rock came out in 1972 and set down in a particular span of time already sinking into a collective understanding and realization that things really could get a Hell of a lot worst. And did. The timing couldn’t have been better, though. For all of its clusterf… er, crises and missteps, the Me Decade heralded some of the absolute best cinema this country had to offer in that period. Even if it seemed to do this from behind bars. For that reason, it shouldn’t surprise that the off-beat and the crime films of the time have rarely been surpassed. Some of these are almost legendary.

As someone who’d know, screenwriter Josh Olson may have described this Peter Yates film best in a 2011 Trailers From Hell segment:

“This is a really fun movie, the kind of thing we just don’t make that much anymore. Hollywood seems to have trouble nowadays with anything that combines tonalities. It’s a very funny movie, but it’s not strictly a comedy. It’s more a caper film with a light touch.”

Josh nailed it. And with the very same reason the current film gathering Oscar-buzz, Argo, works so very, very well today. Oddly, it’s the cheerful tone in the story that changed the course in Westlake’s writing. Originally, this book was supposed to be another murky ‘Parker’ novel (the same character the Brit Jason Statham re-introduced to moviegoers just last week). When he originally wrote it, the intended dark pulp novel kept coming out funny, and so un-Parker-like. Especially for the unlucky thief and his crew stuck having to steal the same thing over and over. And so a new character was born. The rest is literary history. 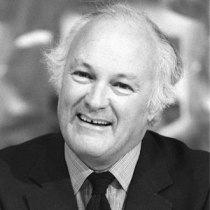 No doubt the reason that it worked as a film, beyond the great story, was the fact it was placed into the more than capable hands of British director Peter Yates. Yates always had a knack with crime film. You only have to look at 1968’s Bullitt and The Friends of Eddie Coyle the very next year to realize the criminal craft he lovingly framed never failed to intrigue with him at the helm. I have my colleague Colin to thank, by way of his fine movie review, for putting the film that started it all on my radar. If studios hadn’t seen Robbery (1967), well the likes of Steve McQueen and Robert Mitchum, and movie viewers would have been poorer for it.

Like those movies, The Hot Rock exhibited a prime ingredient for this filmmaker. All of his films have a real sense of location. The environment and ‘place’ are firmly rooted in the story right along with the characters. And the New York City of the 70s was unlike anything you see or experience today. Not even close. The high crime rates and other social disorders of the time that made the city notorious at home and abroad was captured like a fly in amber by Yates, the screenwriter, and cast. A bit like The French Connection and Dog Day Afternoon. With just the right mix of funny and bad luck to not totally scare the crap out of ‘ya.

Just ask the hippie holding the scissor blade in your ribs.

“I’ve heard of the habitual criminal, of course. But I never dreamed I’d become involved with the habitual CRIME.” ~ Dr. Amusa

Few films could do better with someone the caliber of William Goldman (reuniting with Robert Redford from his Butch Cassidy and the Sundance Kid days) penning the translation of a novel to the screen. Let alone one with Donald Westlake’s way with dialogue and plotting. Both have a distinct and adept way with words. There were no slouches here, folks. Obviously, the equivalent analog would be Westlake adapting Jim Thompson’s The Grifters in much the same way for Stephen Frears almost two decades later. And with all its brilliant grit intact, I’d say. 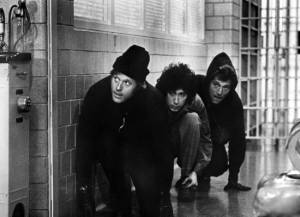 Add to this a cast headlined by Redford (who for some reason didn’t think much of this movie, strangely enough) as Dortmunder and a mix of character actors and faces worthy of any NYC film of the time. Ended up a movie everyone could spot but few really understood back then. Audiences stayed away — it didn’t make its budget back at the box office. Although it has to be said Ron Liebman, Paul Sand, and Zero Mostel steal every scene they’re in on its behalf. George Segal and Moses Gunn aren’t exactly chopped liver in this, either. Sprinkle in Quincy Jones’ score, and the attitude one would expect from this city and time, and The Hot Rock had the raw quality that made films of this era distinct. And brought another anti-hero to a decade known for them.

All this was manifested in one crucial sequence, gelling all of the story’s quirks and cast. A surprisingly dramatic one. The stellar clip highlighted those tonalities Mr. Olson noted. The unnerving segment culminated the second act and really set up the third. Specifically, the pretense of getting kidnapped Abe Goldberg (Zero Mostel) to spill where he’s hidden that damn rock. That it’s staged in some abandoned Gotham warehouse William Friedkin or Sidney Lumet would be right at home with and assuredly stands out. Even if it possibly costs the life of one of Dortmunder’s own (Paul Sand) to do it, it showed what this crew was capable of. The threat and mayhem director Yates’ put on parade here brought the main tension to an unexpected release by the scene’s end. It’s brilliant and memorable, IMO.

“Not me. I’ve got no choice. I’m not superstitious. And I don’t believe in jinxes, but that stone’s jinxed me and it won’t let go. I’ve been damned near bitten, shot at, peed on and robbed. And worse is gonna happen before it’s done. So I’m takin’ my stand. I’m going all the way. Either I get it, or it gets me.”

When all is said and done, Peter Yates, with a big assist by William Goldman, crafted an entertaining caper film in The Hot Rock that respected the material, played to his strength within the crime genre, and translated both quite well to the big screen. It easily ranks as the best of the film adaptations that came out of Donald E. Westlake’s series. Bank Shot with George C. Scott being the next one down, chiefly since it was filmed during the same era. The less said of What’s the Worst That Could Happen? from 2001, the better. Perhaps most readers didn’t see the 70s sex symbol, Robert Redford, as the distinctive Dortmunder, but he made the most of it. Getting away with it by way of his reaction shots throughout. But perhaps the film’s real achievement was balancing between being fish and fowl. That, and crime pays. Hey, as someone who survived the 70s, you could have done a Hell of a lot worst back then.