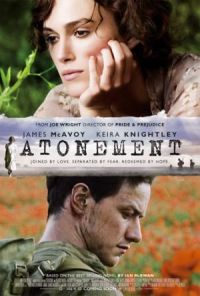 Picking up where 2013 (along with my collaborator and I) skipped over, we’re back for another go. Seriously, this year has had its share of poignant passings and anniversaries, along with overly busy schedules and general upheaval, already. What’s that old saying about March? “In like a lion, out like a lamb.” I know friends in parts of the country who’d dispute that, besides me. Onward and upward, I suppose.

The blogger otherwise known as the Scientist Gone Wordy and I will return to the fold, as was done the previous annum, with a bit of romance for this duo post. One that should have arrived in February (like last year), but there it is. My colleague Rachel will examine the prose of a book later adapted to film, which I will review. For this month, the wordy one will examine a work by the English novelist and screenwriter, Ian McEwan.

His 2001 book, Atonement, won the 2002 Los Angeles Times Book Prize for Fiction. It was adapted by screenwriter Christopher Hampton for the British romantic (slash) drama (slash) war film directed by Joe Wright in 2007. Rachel’s book review can be found here:

A brief synopsis of the film: Wealthy estate, England, 1935. Briony Tallis, a budding thirteen year old girl, of letters and mind, spends her summer as the young and affluent are wont to do. Writing her imaginations down and presenting them to family members for approval and attention. Secretly, she has a crush on one Robbie Turner. The handsome son of her family’s servant who has returned with a Cambridge education courtesy of his mother’s employer. The same young man who only has eyes for Briony’s older sister, Cecilia. After first spotting Cecilia and Rob’s rising romance, and outraged later at catching them in an intimate moment, calamity arrives with her pique. Briony will damn one, and ultimately both, by informing authorities that Rob committed the heinous act discovered on the estate. The repercussions of the lie will echo throughout the six decades to come.

“My darling, Briony found my address somehow and sent a letter. The first surprise was she didn’t go up to Cambridge. She’s doing nurse’s training at my old hospital. I think she may be doing this as some kind of penance. She says she’s beginning to get the full grasp of what she did and what it meant. She wants to come and talk to me. I love you. I’ll wait for you. Come back. Come back to me.”

I recall when this film debuted on this side of the pond and for some reason I didn’t want to see it. The motion picture seemed like pure Oscar-bait. Crafted for the big screen solely for the distinct purpose of garnering acclaim and film awards. I can’t explain why I dismissed it out of hand like that. Every other studio does it, especially our own, so why hold that against it? Perhaps, it was the premise laid out by reviewers that turned me off. Maybe it’s that I have a limited, narrow tolerance for films of the romance ilk — outside of rom-coms, that is. Plus, it’s just so… British.

I know, I know. Paraphrasing Inspector Kemp, “Jealousy is an ugly thing…” As my guest post contributor, Kevin (aka Jack Deth) in his most recent It Rains… piece admitted,

“I have come to the conclusion that the Brits do some things better than the U.S. Documentaries are a given. As are some forms of urban gangster films. Police procedurals that leave U.S. contemporaries in the dust. And costume dramatic and comedic period pieces best enjoyed on wet, rainy weekend afternoons.”

That last sentence fits Atonement to a tee. Something for those “… wet, rainy weekend afternoons” to warm the heart and dab away the tears. With the rich dialogue only the English churn out without seeming effort. Admittedly, it is their language. We, who gave so much consternation back in the late-1700s, have bastardized it all to Hell and gone these many years later. Serves us right. Maybe that explains it. Why literary classics like Pride and Prejudice and I don’t see much in each other. Oh heck, I still don’t have a hankerin’ to start a Downton Abbey marathon anytime soon. Admittedly, I suggested the novel/film for this series, too. My own penance it would appear.

Ah, but I digress. Joe Wright’s adaptation remains splendid in many ways. And there are parts of it that enthralled and held my interest. More than once catching my eye with what was on the screen during the film’s languid 123 minute runtime. Atonement was simply gorgeous to watch. There, I said it. DP Seamus McGarvey‘s lensing was nothing short of extraordinary. And if there’s a couple of things that certainly standout in the entire production, one had to be the meandering and epic tracking shot on the beach of Dunkirk. The sequence should be mandatory viewing for every film viewer, blogger, or student to watch, just to see how it should be done.

Of course, the second would be the scene where anyone who ever held a book in their hands, or scanned a shelf for a particular title, would confess, “I never thought you could do that in a library.” I’m sure there are more than a few librarians out there who could write a tell-all and confirm the assertion. Either way, I think we all need a room like this in our homes for this purpose alone. Certainly, Keira Knightley and James McAvoy framed and contorted to viewers’ undeniable pleasure. Yes siree. Nothing prim or reserved, that’s for sure. A new definition of ‘pining’ that left Victorian romance in the dust, at least for this sequence. That director Wright could pull this off, especially with the rail-thin Ms. Knightley, was commendable. 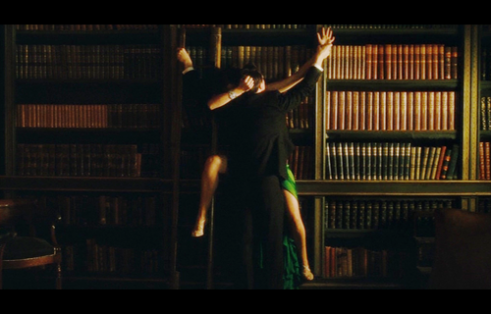 Now, I’ve read some who claim Atonement was an “… amazing story about love, truth, and justice.” Perhaps. I’d only have a problem with that last part. Or at the very least the portions that too often came off as clever. Way too clever. The literary motif running through the film was nice, but a little overdone for my taste. The film’s rhythms set to the strikes of typewriter keys were artful (especially for those of us old enough to have used such devices in real life), but became tiresome since it was placed so obviously as part of the film’s musical score. Then, there was the story…

I do appreciate that the screenplay did not explain away everything (as we Yanks are so damned guilty of these days) and left it to the audience to experience and piece together for themselves. With the narrative’s jumps through time being the prime hurdle. Still, a good thing. So, too, the unspoken bits of class tension and inequity in the tale. And yet, I didn’t love it. A bad thing for something involving romance, wouldn’t you say? Along with the symbolism utilized. Foot washing? Really? It’s a beautiful production. No argument there. And one with a fairly rich cast — the creepy Saoirse Ronan standing out with Knightly and McAvoy, for sure. With splendid support from Brenda Blethyn, that cad Benedict Cumberbatch, and the film legend that is Vanessa Redgrave.

Read the spoiler warning above, didn’t you?

However, the as yet unspoken elephant in the room (English metaphorical idiom, btw) was the twist Atonement offered up by story’s end. You’ll either love it, à la Memento, or feel the rug pulled out from under you (I got a million of them, folks). Possibly, ripped off (yes, an American axiom I had to interject) in the process. You can probably guess where I’ve landed on this. The arrival of the sequence, akin to a sound only a few us remember well enough these days, can cause neck injury when watching this most stylish of productions. It’s that kind of change, folks. A pull out moment, if there ever was one. And don’t get me started on the utter conceit offered up by the key character of the entire film that caused me to throw something at the screen during this, my initial viewing:

“So, my sister and Robbie were never able to have the time together they both so longed for… and deserved. Which ever since I’ve… ever since I’ve always felt I prevented. But what sense of hope or satisfaction could a reader derive from an ending like that? So in the book, I wanted to give Robbie and Cecilia what they lost out on in life. I’d like to think this isn’t weakness or… evasion… but a final act of kindness. I gave them their happiness.”

Did it ruin the film for me? No. I can’t say it did. Not entirely. Joe Wright is an obvious talent. A filmmaker that continues to gather notice (last year’s Hanna certainly grabbed my attention). His war scenes offered uncommon contrast (“Where character often tops action...”, as Kevin stated). Ronan’s guest review from last year of his latest film being another motivator to view more of the man’s work. No surprise this gathered BAFTA’s highest award that year. Though, coming up short around Oscar time, especially for Christopher Hampton’s writing and McGarvey’s cinematography. For all one knows, the Academy and me not giving Atonement a higher return or more praise was conceivably our (slash) their (slash) my lack of understanding for the outstanding British method of film and romance. Or maybe being distracted by the fact that Keira needs to eat more than a salad, for chrissakes. But, at least the film was not The English Patient!

I sincerely hope my facetious tone did not insult my friends and readers from the U.K. If it did, my apologies. Just get me the Hell out of March! I promise I’ll be nicer.