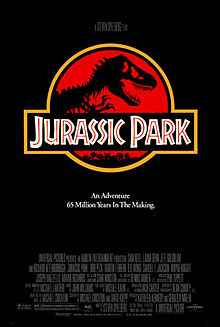 For the longest time it seems, Memorial Day weekend has been the unofficial start of summer (solstice be damned)… barbecue season, too. Once, the summer movie season began on this holiday weekend, but no more. Nowadays, it’s the first of May for the blockbuster movie constant pitched for our diversion — just watch, the marketers will begin pushing it back toward April next. Action, thrills and special effects are the order of things during this time of year. But I don’t mind, to a point. I love escapist fair as much as the next guy or gal. As long as it treats me like I have a brain in my head, however. Michael Bay rarely need apply.

So once again, it’s time for the blogger otherwise known as the Scientist Gone Wordy and I to add another of our duo posts in the series we started last year. For this one, we took on a novel/film pairing that many fans, young and old, hold in mutual affection and memorable admiration. As usual, the wordy one will look at the text of a famed novel later adapted to film, which I will review. In this case, she’ll be looking at the 1990 source science-fiction novel from the famed (and late) author Michael Crichton for the 1993 film adaptation, Jurassic Park. Rachel’s book review can be found here:

A brief synopsis of the film: A billionaire has a problem, and one that could only happen to the very rich and eccentric variety. By way of scientific breakthroughs, John Hammond and his team of scientists have genetically engineered a way of cloning actual dinosaurs to populate an island off the coast of Costa Rica as a future, modern theme park. His issue is with his investors and a launch date. One of his park employees was attacked and killed by one of those ‘star’ attractions, and his financial backers have grown skittish to the idea. Said shareholders, naturally led by a lawyer, demand assurances that Jurassic Park will be safe for the paying public and therefore bring in their expert, a mathematician, to decide if it is. Hammond counters by bringing in his own set of experts (a paleontologist and paleobotanist) to balance out the upcoming evaluation. Their exploration of the island park, to decide what’s really going on, is the gist of the science and technology gone terribly wrong story.

What’s remarkable about this 90s film was that director Steven Spielberg caught lightning in bottle once more in another decade and place. The first time being with the summer blockbuster champ that set the template for it all, Jaws, 18 years earlier. The combination of a surprising story (itself adapted from another bestselling novel) told through clever dialogue and humor… with touches of startling violence, thrilling special effects, vast amounts of suspense, and an accompanying and iconic John Williams score, was a unique alignment few films ever meet. It is a rarity, but one that pays off in big box office and heart’s acclaim. This would be too much to ask of any filmmaker to attain on one occasion (though studios never stop trying). Doing it more than once is simply unheard of. 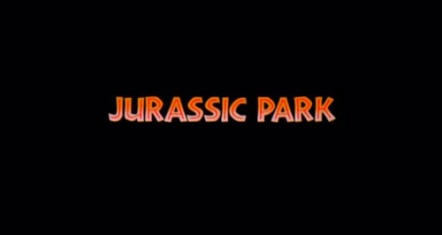 Where Jaws had some shark science to tell its tale, it’s more about the human fear than of the nature. That film uses what we cannot see and control below its (watery) surface to thrilling and horrific effect. Jaws took an ancient apprehension and put a pair of scary doll’s eyes on it, along with rows of razor-sharp teeth to rend flesh and keep us riveted. On the other hand, Jurassic Park‘s initial premise is wonderment and our belief in the promise science provides. But, the picture’s drive is essentially the same as its film forefather. As well, it couples our long-time fascination with the dinosaurs of yesterday we learned about and played with (through books, toys and models) from our youth. Crichton’s original story used it as a lure to pull us into the vision that technology has all the answers… before pulling the rug out. But adults can see through that, yes? Wrong. We were all children once, and with interests that never truly go away. We rarely abandon our imagined dinosaurian dreams. Plus, it’s the adults nowadays who wholeheartedly believe in technology because they’ve grown up with it. And it keeps delivering… something. It is today’s tooth-fairy.

Jurassic Park was a success because it coalesced all of that into one spectacular package. It’s memorable because it was an experience to watch. And for that, ironically, we should not forget to thank the tech-side of things. How much lower does this film rank with viewers without Industrial Light & Magic core of technicians and computers, along with the artistry of Stan Winston and his crew, to bring said dinosaurs to life? A lot, I think. The soft side of the director, furthermore, delivered notable emotional moments in his 1993 film with the extraordinary skill he’s known for. For example, when the experts first land on the island and meet up with the herbivores of gargantuan size. Their awed faces of wonderment may be captured magnificently through cinematographer Dean Cundey’s lenses, but if the audience doesn’t buy the effects they’re looking at, the captivation barometer barely registers, I think. Yet, it does, and is probably one of the most remembered scenes from the film because of those factors.

While Spielberg has that gentle facet in his repertoire, he really cleans up when he goes the other way. Going for the throat (like he did in Jaws). Both films share similarly in this regard. They remain alike as they both work off of the fear of dying. Specifically, our innate dread of being eaten alive by some thing bigger, faster, and more menacing than us. Both pictures do this with exuberance. The audience bites into the concept whole hog (with apologies to my vegan friends for all the eating and animal references so far), again helped enormously by tech wizardry. It made the T-Rex the most generationally remembered and heart-thumping character in the piece, IMO. Think it’s been forgotten years later amid all the latter-day CGI creatures? Hardly. Refer to its edification in film: the Tyrannosaurus’ chase of the jeep towing Malcolm, Sattler, and Robert Muldoon (Edge of Darkness’ Bob Peck in a noteworthy part) to temporary safety. The almost shot-for-shot mirror reference with Rex’s pursuit of the car in Pixar’s Toy Story 2 (1999) was one of the most instantly and universally recognized homages by any movie audience. In other words, Jurassic Park had by that time become part of our own culture.

As well, author Michael Crichton made a living off of celebrating the advancement of science and technology, and then pointing out our own human folly at trusting that it gave us control (over it and ourselves). He always put his voice and point of view into his novels and, consequently via their adaptations, in films, too. And if you want to see the author’s thoughts and doubt about it all, center on the chaositician, the Ian Malcolm character (done to perfection by Jeff Goldblum). While the audience relates more directly with Drs. Alan Grant (Sam Neill) and Ellie Sattler (Laura Dern), Ian throughout hammers home the foolhardiness of human kind’s and John Hammond’s (Richard Attenborough) endeavor.

John Hammond: “All major theme parks have had delays. When they opened Disneyland in 1956, nothing worked!”
Dr. Ian Malcolm: “But, John. If the Pirates of the Caribbean breaks down, the pirates don’t eat the tourists.”

As much as Crichton enjoys pointing out the technological foolishness in his stories, his protagonist usually come from the scientific discipline and are as sharp as the proverbial tack. They ain’t Arnold (thankfully) and aren’t blessed with Python-like guns for arms nor have washboard-like abs (well… maybe Laura Dern… or my collaborator Rachel). It’s always been a welcomed character trademark for the techno-thriller — a genre this writer almost single-handedly invented with his first book, The Andromeda Strain, way back in 1969.

Still, what stands out, even now, are the relatively ancient CGI sequences deployed in the film (one of the first to really create the illusion of something special happening before our very eyes through computer effects). As oppose to today, they are wonderfully blended with the live action performances — 18 years in the other direction, Jurassic Park‘s SFX still look better comparatively to many of the effects-laden films of today. The credit surely goes to the filmmakers knowing you couldn’t depend upon the technology to carry an entire movie — that you had to have a story and performances to hold it all up. The relative immaturity of Jaws‘ effects also kept them in check, to the ultimate benefit of that film. Having the great Stan Winston onboard JP, mixing his grand talent for analog (non-CGI) creature effects that remain unsurpassed (even decades later), cannot be minimized. And that’s what you have here. A lesson many current film producers today still don’t get (cough Michael Bay).

Jurassic Park successfully married Michael Crichton’s knack with story for placing human beings in visionary tech traps of their own hubris and Steven Spielberg’s talent for combining emotion, humor and horror in contemporary adventures into a near perfect modern cinematic thriller. I have to say ‘near perfect’ because my computer friends, still to this day, ramble on about Hammond’s ‘hacker’ granddaughter (Ariana Richards) UNIX skills — that and wanting Samuel L. Jackson’s character to curse a hell of a lot more (for various reasons). It remains a memorable film that crosses generations. I recall taking my late mother-in-law with us to this film experience when it was first released. The same wonderment and fear the filmmakers convened on-screen with the movie characters played concurrently across her face, and on those sitting around her in a crowded movie theatre. Just like years before with Jaws, this set of filmmakers knew how to tell a story, and tell it well (whether they were entirely faithful to the source novel or not). Basically, the lawyer in the picture forecast it best:

“We’re gonna make a fortune with this place.”