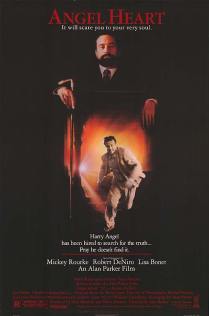 It’s still winter, yes? I say that because mother nature continues to toy with those of us in the southland. It’s been a false spring for L.A. dwellers of late, and it seems few know that it won’t last. It’s just a wicked joke waiting to be played (this after a weird and very wet Fall). I don’t expect to get much sympathy on this point from much of the country given what many have gone through in this cold and snowy January.

Still, everyone else is not under constant threat to slide into the Pacific Ocean after a gargantuan quake like us (the fact that we’d be wearing shades and sunscreen when it happens is besides the point). So, it’s probably good timing for the Scientist Gone Wordy and I to get the duo post series back on track after the holidays. As usual, the wordy one will examine the text of a famed novel later adapted to film, which I will review. In this case, she’ll be looking at the source novel for the 1987 Angel Heart film, Falling Angel. Rachel’s book review can be found here:

A brief synopsis of the film: In January 1955 New York City, an archetypical low rent private investigator by the name of Harold Angel hits a jackpot of sorts. He lands a seemingly routine missing-persons case for a wealthy client. It appears some big band singer from years back didn’t fulfill a contract with the mysterious vendee, a chap named Mr. Cyphre. It is explained that the crooner was institutionalize long-term due to WWII injuries and shell shock. PI Angel’s job then is to prove the hospital in question has falsified the records, and using what he comes across, to locate the fellow with the stage name of Johnny Favorite so that a certain ‘collateral’ can be collected by the patron. The dark elements that the private eye uncovers, and the peril he faces in doing so, will be laid bare in the telling of the tale.

“Alas… how terrible is wisdom when it brings no profit to the wise, Johnny?”

My Review: Alan Parker’s feature remains very much a film of the 80s, but it sure as hell doesn’t act like one. There’s no big hair or shoulder pads to get in the way of this period piece. No siree. We’re talking about a picture very much in the film noir tradition, crafted by a director (and cinematographer Michael Seresin) who were known for their imagery and styling from that ‘decade of excess’. All the same, the filmmakers didn’t just create some striking visuals and leave it at that for others to gape at.

No, they managed to tell an effective and chillingly original story. Director Alan Parker himself adapted Hjortsberg’s novel in a way that honored the author’s blending of the noir convention with hard boiled detectives for the subtext dread of the horror genre. My friend John Kenneth Muir could have referenced this film in particular for last month’s excellent book review of Paul Meehan’s Horror Noir book. John cited an introductory passage which nailed the techniques described and used in this film, in fact:

“In his introduction, Meehan rightly notes that, in large part, film noir and the horror film share a “realm of cinematic style,” meaning, as he enumerates them: low-key ratio-lighting, absence of fill-light, wide-angle lens use in close-ups to distort faces, etc.

Meehan also points out the deployment in both genres of “anti-traditional narrative techniques,” meaning flashbacks and voice-over narration specifically. This chapter nicely sets the parameters of the ensuing survey, allowing the reader to understand which productions exist in the unique “space” of the horror noir, and why so.”

All of which exists with Angel Heart. While Parker stayed within the spirit of the novel, he wasn’t afraid to play to his visual strengths. The prime example of this was how the director bookended the film. The first primarily set the mood, even before the audience was ever introduced to the private dick Harry Angel. One so well imagined by a young Mickey Rourke. The short main title sequence at the onset (not in the novel) consisted of a night’s city street littered with the telltale squalor for a less-than-well off NYC borough. As the camera observed a gaunt cat and dog wander about the scene, scavenging for food no doubt in the poor neighborhood, the viewpoint shifted to a throat-cut victim in the street.

The violent leftover of some evil ritual. And in that instant, there’s a sense more than just the specter of death was floating about. As well, a recognition of indifference within the setting. Only a lone walker strolling by passed through the scene at the beginning, likely sauntered by the fatality with nary a pause as the spilt warm blood rapidly cooled against the cold, wintry ground. The segment established that no one saw, or really cared. This just fixed a feeling of foreboding for the story ahead — all without a hint of dialogue. It’s a subtly brilliant start to the film that declared the director was going to leverage the moving picture aspect to drive much of the story. This with the traditional first-person perspective found in detective noir classics.

“No-one will mourn one less lawyer in the world – there’s death everywhere these days Johnny. But what gives human life its worth… anyway? Because someone loves it, hates it? The flesh is weak, Johnny. Only the soul is immortal. And yours belongs to ME.”

The director, too, took advantage of a compact cast made up of heavyweights (past, current, and future) with the support of some fine character actors. Since it’s told entirely from his character’s standpoint, Rourke got the lion’s share of scenes and dialogue. And he carried it off exceptionally well. All before his decline, marked by his own excesses, and the inane idea that he had a career in boxing. Of course, no one can forget Robert De Niro‘s turn as the pivotal Louis Cyphre in the story. This was De Niro in the midst of his career peak giving a performance (even though it’s essentially a small supporting role) that scared and mesmerized those who watched it. What remains the most puzzling, though, was Lisa Bonet as Epiphany Proudfoot.

She’s an arresting presence whenever she’s on screen in the film. You simply can’t take your eyes off of her, and can certainly understand Harry Angel’s attraction to her bedeviling persona. This should have been a breakthrough role for her, but instead it seems like the film did little to help her career. Too bad. She has only a scant filmography. Which is baffling in itself especially for someone as good as she was here. Breaking into film during the mid-to-late 80s should have turned out better. Still, the lead actors only told a portion of the story why Angel Heart remains one spellbinding film.

“That’s it, Johnny. Take a good look. However cleverly you sneak up on a mirror, your reflection looks you straight in the eye.”

Even though it ended up being a break even movie at the time, plus controversial for its sexual content and use of the young actress from the family oriented Cosby Show, the film certainly by now has reached true cult status. And why not? With its mix of crime and mystery, along with the disturbing brew of satanic horror interleaved throughout, I think it’s clear why it has earned its way to the top echelon within its small sub-genre. As well, Hjortsberg and Parker successfully used the old literary device of foreshadowing in many instances and to great effect (on paper and the big screen). It takes multiple passes with the material to catch them all. In particular: 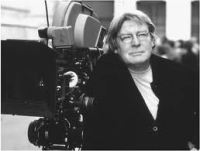 Director Parker ‘s own touch was also affirmed by all the visual instances of spinning fans in the film, which he used to symbolize death coming to call. As well, give him credit by shifting the mood and atmosphere in the story, plus adding some social contrast in the film, by moving it away from a cold gray New York City to the jazz/blues vibe of New Orleans. The music cues meant to represent the voodoo undertow. Outside of Apocalypse Now, I can think of few films that top the use of humidity and sweat to palpable effect like Angel Heart.

With what the plot portends, I don’t think it was much of a surprise when it’s revealed that Harry Angel and Johnny Favorite are one in the same. The former star singer’s attempt to get out of his contract with the Devil by garnering another’s identity/soul via ritualized murder doesn’t quite work out for him. Some people you don’t want to swindle, and Lucifer’s route to collection was fittingly and singularly a sick one. Still, the enjoyment in the film remained the ride that got you there. Plus, it was the Harry character the audience grew to care for, since he was also an innocent victim. The poor soul captured on New Year’s Eve back in ’43, and so the finale had impact. 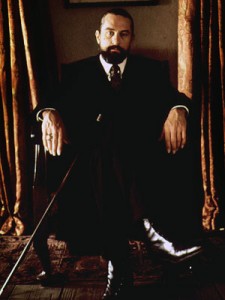 Angel Heart was an unforgettable film. Just ask anyone who has ever seen it if they could get some of its images out of their head, and one worthy of the William Hjortsberg novel. It shouldn’t overshadow the book, which was great, and has one of the all-time best book covers. But there’s a tendency in pop culture for that, unfortunately. Nevertheless, I believe it would be apt to close this review by using Alan Parker/Michael Seresin’s own striking end sequence, the latter bookend piece I mentioned earlier. The dark, contrasty images of Harry Angel’s ‘elevator ride to Hell’ intercut with the closing credits, along with creaking sounds and sinister musical score (with kudos to composer Trevor Jones and mournful solo sax work by Courtney Pine).

All of it made this segment well worth staying to the end for. And if you listen closely at the finish, you hear the two souls whisper to each other on a black screen, another of those bits audibly foreshadowed earlier of the film…

The Disc: I picked up the Lionsgate Blu-ray Disc of the film which came out in November of 2009 for this review. And for the most part, I was happy with the disc (a great sale price compensates some). Still, it’s not the greatest high-definition treatment for an older (coming up on a quarter of a century now) film I’ve seen of late. Angel Heart‘s New York nightscape scenes have some striking contrasts, but the blacks on the BD weren’t the strongest. Despite all that, the disc kept the original theatrical aspect ratio of 1.78:1. The audio, too, could have been better (some of the dialogue were not as crisp as one could have expected). It’s not bad, though (just not great).

Where the Blu-ray Disc really shined was with its extras. Luckily, the studio ported over the features present in the 2004 Special Edition DVD. The two audio commentaries by Alan Parker and the more scene-specific one by Mickey Rourke are particularly interesting (so, too, are the separate interviews for each of them). The voodoo featurettes and behind-the-scene production extras round out what is a very good set.

Lastly, while the new Blu-ray Disc menu offered some great graphics over the DVD, I have to admit I continue to be disappointed in both the ’04 and ’09 disc’s cover artwork, which are the identical). I’ve never been a fan of it and wish they’d have gone back to the original poster (above). Even the old VHS version used it.

Note: for an excellent overview of the film’s spellbound (and hard to come by) soundtrack, be sure to check out the music blog post by Shimmy She Wobble.