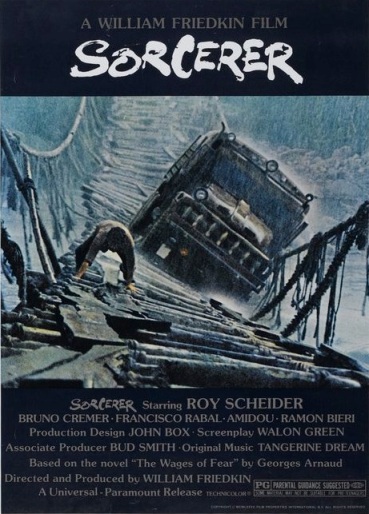 Whether some things are doomed to failure because of bad timing on their release, or in combination with a lack of understanding by those (few) that initially see it, it is a continual shame when a great film is left on the trash heap of history. Such was the case for the forgotten gem from 1977, director William Friedkin’s Sorcerer. It remains a movie lost to time and notoriety. No doubt, most of which was due of its difficult shoot in a jungle location in the Dominican Republic, and a host of travails in getting it completed. And being the production where its director earned his less-than-affectionate nickname, “Hurricane Billy.”

Big name stars (or soon to be big names) either wanted the lead role or turned it down. Although I was one of those few who actually saw this film in a darkened theater on its short-lived first run, the film has never really left me. It made that much of an impression. Still, I can’t take credit for identifying it for this week’s forgotten post. Writer Josh Olson, one of the very best of the insightful gurus over at director Joe Dante’s Trailers From Hell site, has long been an admirer. He highlighted this film a couple of years ago, and it just doesn’t get much better than his marvelous appraisal in the trailer’s commentary:

I agree wholeheartedly with Josh on how great this little seen film really is. And the Star Wars effect he talks about on its release is a valid one. Still, since it was an American remake (something I’m usually against, especially in the current staid studio environment) of a French classic, Wages of Fear (original title, Le Salaire de la peur) by Henri-Georges Clouzot, I suspect critics were likely already sharpening their knives for the man who dared to attempt it. Since he successfully delivered The French Connection and The Exorcist in succession likely only added to that targeting.

Together with Friedkin’s directorial reputation, the movie was going to get a hard reception no matter, and especially by those who the director rubbed the wrong way. This film definitely deserved better. The Tangerine Dream soundtrack along with its stunning visuals made its stark, desperate story that much more mesmerizing. If, as film history records, Steve McQueen had ended up in the lead as he wanted, I’m sure it would have been great — and the film may not have suffered the apathy that plagued it. Still, he didn’t. That gave the underrated Roy Scheider an opportunity to deliver a truly remarkable performance, which many missed. It still haunts those who’ve seen it.

I do hope more people get a chance to take this little seen film, and appreciate it. The current DVD is a bad barebones release from 1998 by Universal Studios (“I’m shocked, shocked to find that gambling is going on in here!“). Of course, it suffers from all kinds of neglect. Besides no real extras, its chief malady is that its less than first-rate print was also badly cropped to a 4:3 aspect ratio — down from its original widescreen presentation (1.85:1). This is especially criminal since the cinematography and Friedkin’s visual composition is all but destroyed by that negligent decision.

Back in January 2011, I reported on the American Cinematheque Los Angeles’ two-day tribute for director William Friedkin. The clear highlight of the double-feature evening was this neglected gem in a stellar 35mm print. Screenwriter Josh Olson was in attendance and conducted the intro and the discussion with the filmmaker afterwards (most of which I got to record). During this session, Friedkin stated he’d start the Blu-ray Disc remastering process for Sorcerer later that year. In a May 2012 interview with Movie Geeks United, the director explained the problems, and studio practices, that subsequently arose. 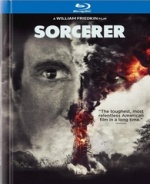 Editor’s note: The newly remastered Sorcerer Blu-ray Disc has been released. In fact, in May 2014 I picked up that disc, and had Mr. William Friedkin himself autograph it, along with his softbound memoir at his book signing at Dark Delicacies in Burbank.

With William Friedkin now taking Universal and Paramount to court, to decide who ultimately owns the film, fans of the work (like myself) sincerely hope a worthy release remains in the offing and will still come true. That said, as Mr. Olson mentioned in his trailer narration, the theme instrumental has been used many times in other movie trailers (and in another marvelous late-70s film). However, it’s never been more effectively utilized than in its original showcase. This is specifically true when the track comes up for the last time at the Sorcerer‘s memorable gut-punch of a close.