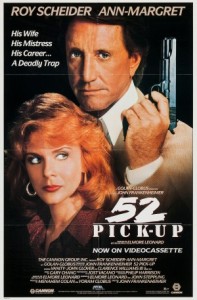 We’re not exactly in the dog days of summer as yet, but the heat is certainly building up already. Maybe it’s telling that our next entry in this year’s Duo Post series places one of my favorite authors back under this old book-film microscope of ours. As we did two years ago this month when we dusted off a classic western tale, the great and late-Elmore Leonard marks a return. Though now in the other genre he was equally renown for — the crime tale. A topic that continues to fascinate because we’re never at a loss for wrongdoing.

No wonder it’s one of the most enduring and popular of film genres.

Mr. Leonard certainly had a way with it, too. His svelte prose was certainly honed out on the prairie with the taciturn folk on any side of Manifest Destiny, but many fans thought his true calling was with the colorful personas inhabiting the more cynical thrillers of present day crookedness. Less dust, but no less dusky with the subject matter, which had its own murky sense of justice…and the distinct humor of this writer.

One of my picks for 2016, the wordy one will look at his 1974 novel (eye-rolls a plenty I’m sure from those again spotting a ’70s connection) 52 Pick-Up, which detailed a wayward husband coming to terms with the decade and the blackmailers who think they’ve found an easy mark. I’ll take on its neo-noir film adaptation under the tutelage of a famed social dramatist and master craftsman that also moved the storyline from declining Detroit, a Leonard favorite, to the mid-’80s seedy glamor of Reaganomic Los Angeles.

The wordy one’s book review can be found here:

A brief synopsis of the film: Harry Mitchell is a successful L.A. manufacturer with a fancy car, a nice house, and a wife running for city council. An idyllic life about to be turned upside down when three blackmailers confront him with a video tape of his dalliance with a young mistress. The usual mid-life crisis his exploiters use to demand $105,000 hush money.

To protect his wife’s political ambitions, Harry won’t go to the police. No, instead he confesses his sin to said less-than-thrilled spouse and shines the blackmailers on. Then, things go from bad to worse for both the threatened and the blackmailers because the almost reptilian-like Harry Mitchell doesn’t get mad — he just gets even.

“And as the sun sets slowly in the west, we say goodbye to beautiful Palm Springs, oasis of intrigue and extracurricular games of Hide the Salami, and we return to real life.”

I realize that my selections this year all have a nefarious tinge to them. Those dealing with city crime directly, like The Laughing Policeman and this, have a bit of a sleaze factor that might not be everyone’s cup of tea. Beginning to wonder what drove these picks myself. Some kind of undercurrent, perhaps? Maybe because it’s an election year here in the States, who knows. Either way, it was great once more to open up an Elmore Leonard I hadn’t read till now and only knew through its cinematic translation.

While it could be said Elmore Leonard’s novel, along with John Frankenheimer‘s fine cinematic distillation of 52 Pick-Up, is just the usual melodramatic revenge thriller, which is true to a certain extent, but that would certainly miss the point of crime fiction. They often catch those of us who think we’re good and true, and on the side of law and order (or the angels), totally off-guard. Exposing our selfish inner wants and wishes in our capitalistic society to the light day through the characters depicted in movies.

And it’s no secret the best of ’em have the most charismatic cast as the villain.

Our id right out there, on the big screen and in bright contemporary Technicolor; like here in one the better of the neo-noirs that clawed its way out of the tumultuous “Seventies” and into the following decade that could care less for nostalgia. A gripping thriller that flew under the box office radar back then for more than a few moviegoers, if a bit lurid for some of those who made it out for a screening during the Fall of ’861. Then again, this was a pretty faithful adaptation of a typical Leonard crime novel of that era.

Striking personas (both literally and figuratively) doing violent, less-than-pleasant things to get ahead. All with the author’s distinct way with dialogue and his usual unexpected plotting to keep your interest. 52 Pick-Up has that (on paper and film), now whether its works for the viewer remains the variable. I’m sure the snuff sequence involving the murder of Cini (Kelly Preston) will chill many. But for fans, this is what drew them to the Louisiana-born writer who found a footing in Michigan in the first place.

Interesting to note that the ’80s was not a decade most John Frankenheimer fans cite as his best. The Holcroft Covenant a lesser of the Robert Ludlum adaptations; Dead Bang and The Fourth War, too, didn’t garner much praise. Yet, his only foray into martial art action, The Challenge, and this neo-noir, have attained a cultish following for how they work character-wise. A strength of this filmmaker as seen in his best features in a long career: Birdman of Alcatraz, The Manchurian Candidate, The Train, Seconds, and Ronin.

52 Pick-Up may not rank as high as these, or arguably among the author’s finest film adaptations, but the John Frankenheimer trademarks that so typified this filmmaker are what made him a fine fit to helm a Elmore Leonard vehicle such as this.

Harry: “There’s something about your face that makes me want to slap the shit out of it!”

No way around it, Frankenheimer crafted a nasty little gem of a thriller using all the tools at his disposal. Framing some stunning scenes with excellent camera work by Jost Vacano (Starship Troopers) and the uncredited Stephen Ramsey that effectively placed the audience uncomfortably close to the unsavory misdeeds onscreen. The lighting and reflections of our blackmail victim Mitchell during the two tape playback sequences standout especially, as do others that involve a underappreciated cast simply giving it their all.

Although, John Glover has made a career out of portraying smarmy or underhanded characters on TV and film, like Andy Robinson in Dirty Harry, this one role “fer sure” pigeonholed him firmly among casting directors. Easily one of the most chilling villains2 in film history, but one of the most jocular, too. The former business school grad turned pornographer-slash-blackmailer-slash-murderer, Alan Raimy. Surely, only someone like this author could come up with this kind of roguish résumé to entice viewers3.

Still, it wouldn’t be a Elmore Leonard crime tale if you didn’t have an almost as intriguing antagonist. Yes, you read that right…I didn’t stipulate protagonist. Few of this writer’s principals are your typical hero. Harry Mitchell, like Mr. Majestyk (published the same year), has a distinct “edge” to him. More gray than white hat. Always fun to watch Roy Scheider veer from his Chief Martin C. Brody persona…think Buddy Manucci (The Seven-Ups). The type that ultimately makes the bad guys realize they picked the wrong sucker to mess with.

The only thing that keeps a guy like this in check would be a wife like his Barbara. Okay, perhaps the great Ann-Margret is a tad wasted in this role. Maybe even a touch wrung out and abused because of it (conceivably, most of the women in the story are placed in the worst of situations), but she certainly classes up the joint like nobody’s business whenever she’s onscreen. With or without hubby. 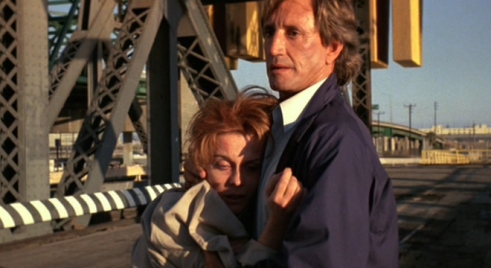 Even the other side players were memorable, if not exactly appealing. Like the ever sweaty but undervalued character actor Robert Trebor giving a loser like Leo Franks a sympathetic turn4. And especially the pair of the ever-dependable Clarence Williams III as Raimy’s henchman Bobby Shy, and former Prince protégé, the late-Vanity (aka Denise Katrina Matthews) in her best acting role in a too short career, as Doreen. Their indelible scene together will make you think twice about a big fluffy stuffed animal being anything but cute.

Add in the uncommon flavors and glimmer of a city like Los Angeles during the era of padded shoulders and flagrant “trickle-down” money-grabbing found from posh Wilshire Center neighborhoods to the industrial City of Vernon, and finally at the end of the line on Terminal Island, and this adaptation had that last character to die for.

“Hi, Alan. This is the first and last ten seconds of the rest of your life.”

Golan/Globus of the Cannon group put out plenty of trashy films during the ’80s, and a bit of that can be found here. Still, having the likes of a John Frankenheimer at the helm, a splendidly underrated A- and B-list cast giving an Elmore Leonard story a worthy turn5, this had to be among G/G’s best. Bar none. Perhaps, 52 Pick-Up doesn’t register on the same scale as Out of Sight or Jackie Brown on the crime side — or even 3:10 to Yuma (Delmer Dave’s, please6) and Hombre westerns — but it most assuredly came close.