Given all the hoopla, ad campaigns and late night talk show chatter and buzz devoted to The Monuments Men. I’ve decided to divert on to a different tract. Oblige my friend, Ruth. Get my miner’s helmet, light and shovel and dig up a rarified gem of collaboration between two giants. John Frankenheimer and Burt Lancaster. Waist deep in one the best of the 1960s plethora of World War II films.

Granted, it is of that variety of films where everyone. Including the higher ranking German officers spoke English instead of their native tongues That said. This film still has authenticity writ large and in Spades due to gritty, no apologies, on location cinematography in, around and outside Paris. In often dirty and smudge B&W.

The fourth teaming up of Lancaster and Frankenheimer. After a rather loud altercation between the former and firing of the film’s original director, Arthur Penn. Resulting in the latter flying across the Atlantic to pick up the reins of a disjointed project and create a touch stone of Old School quality and story telling. 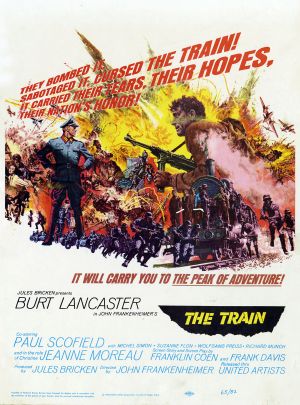 The film begins in August of 1944. And the war not going well for Germany. With Russians heading west from Moscow and into the Fatherland. US and UK forces everywhere else. And looking to liberate Paris within weeks. In desperation. the German high command has assigned the Wehrmacht the task of gathering up plundered paintings, statues and other art treasures from Calvados, Vaires, Saint Ouen. To ship them to Berlin by train.

The man in charge of the operation is Col. Franz Von Walheim (Paul Scofield. In fine arrogant form!) supervising the pillaging of the Jeu de Paume museum. Whose curator contacts the French resistance and starts setting gears in motion. Keeping their actions local by sabotaging locomotives and cars in switching yards and side rails with some success. Until the Wehrmacht gets wise and decide to make an example of a Chief Engineer (Michel Simon) and executes him public.

Putting the weight and onus on the broad shoulders of Paul Labiche (Burt Lancaster. Rarely more physically in touch with his character!). Who is surprisingly adept at any situation. And lives with an Innkeeper, Christine (Jeanne Moreau). Who has close cross-channel connection with Allied Intelligence. Who supply who add some much-needed, clever aid later in the tale.

With the objective being to slow down, delay or sideline the trains carrying war booty. Labiche and others manage to derail a locomotive, tender and cars. Then separate a second locomotive and tender to crash into the first.

Creating havoc and confusion for the Germans. And time to plan and execute more devilment, time consuming diversions. And to paint the roofs of several cars of one train white during a night time stop for water. In the hopes of sparing them from damage from low flying, strafing RAF Spitfires and Hawker Typhoons.

All of this is prelude to the loading and climactic journey of a final train. Whose run is overseen by Colonel Von Waldheim and a well executed, final destructive showdown with Labiche.

Now. What Makes This Film Good?

A just over two-hour sojourn to another time. Well detailed and with a deep respect for past history and the occasional vagaries of war and culture when they collide. While offering glimpses of how those on the ground and higher-ups out of sight and beyond reach adapt and attempt to remedy the situation. 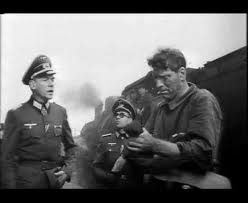 The Germans are German. Cold, efficient, sometimes brutal. Worthy of contempt. Yet, doing whatever is necessary to accomplish their task. Often going overboard in their reactions to sections of rail collapsing. While Von Waldheim learns to be more surgical in his responses to sabotage and delays.

While the French are as clever and imaginative as their collective wits and dwindling numbers can manage. Slowly shifting from Labiche wanting to plant explosives and simply blow up the trains at first. To doing whatever he can to slow the process until the Allies arrive and liberate Paris.

What Makes This Film Great?

Two proven talents in Frankenheimer and Lancaster. Along with a more than able staff and crew performing some of their best work.

Cinematography by Jeane Tournier and Walter Wottitz is more than can be asked for. Especially in the film’s several superb tracking shots. Where Labiche spots an oncoming and too fast train approaching from a high trestle. Tries to flag it down. Slides down a ladder. Hits the ground running. Leaps into the locomotive’s can to apply the brakes before being pushed off and switching the tracks.

All done by Mr. Lancaster and in one take! Another later shots swells with suspense and tension as it follows Col. Von Waldheim (Paul Scofield) on a motor bike. Tooling around and through the marshalling yard . Across the yard and onto the final treasure loaded train.

In a film that was made for B&W. Giving many shades of gray and white to enhance a situation becoming more desperate by the day. Aided by Allied bombing strikes and a spectacular train on train wreck. Completely devoid of Special Effects  or models!

Franklin Coen and Frank Davis accrue high marks for adapting the factual 1961 book, Le font de l’ art by Rose Valland. The art historian who documented the various works of art stolen from the Galerie nationale du Jeue de Paume and other galleries and museums by the Germans. 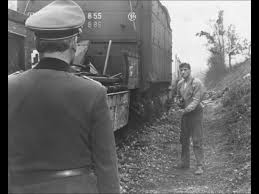 The sound track by Maurice Jarre is more than adequate. Heightening tension and suspense when necessary. As well as occasional lighthearted whimsy.

All parts and departments work together to create a setting and mood that moves the film and story along briskly. Without a single moment committed to errant distractions or sub plots. Creating a very John Ford kind of yarn in the hands of master technicians!