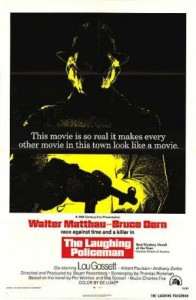 The blogger otherwise known as the Scientist Gone Wordy and I return for another movie that began its life between a book cover for our parallel post series. In fact, with the title originally scheduled for March…my bad.…and what would have completed the “translation trio” we had as the start of this year’s timetable. A Swedish publication joining its Mexican and Japanese brethren already in the books of our review season.

Maj Sjöwall and Per Wahlöö were partners in a decade-long writing collaboration featuring “…middle-aged, mostly unprepossessing policemen in Stockholm’s National Homicide Department.” Originally intended to hold up a mirror to societal problems in their native Sweden circa the 1960s, the Martin Beck series has fascinated crime fiction readers and others since then.

So much so, the international best sellers have been processed and extracted into more than a few films, including television and radio series. Pretty good for something focusing on a dour and dyspeptic main character, I’d say. Rachel will peruse the fourth novel, and Edgar Award winner, The Laughing Policeman while I review its 1973 U.S. film adaptation. The wordy one’s book review can be found here:

The Laughing Policeman by Maj Sjöwall and Per Wahlöö

A brief synopsis of the film: Late one night in a San Francisco terminal, a nervous gentleman is looking over his shoulder at a man shadowing him. Even informing the contact he’s about to meet with the news from a payphone. Grabbing a bus to the Mission district, his “tail” gets on with him. Soon enough, the last passenger that’ll join them gets onboard, carrying a leather valise with a special item inside.

Assembling the small sub-machine gun at the rear of the bus, that commuter then shoots everyone there in rapid succession. Including the plainclothes detective who was clandestinely following his man on a cold case even his partner didn’t know he was pursuing. It’ll be up to said associate to answer what his dead colleague was doing, along with solving the mass murder making his superiors, and the city, nervous.

“Now you got three choices: you can either go to the morgue, the hospital, or you can get in that car. The decision is yours.”

Suffice it to say, being a longtime Seventies film aficionado (especially the crime variety), this was my pick. Expressly since it’s among the few I’ve not yet seen, or read its source novel. Had heard of it, certainly. Headed by an actor who in previous decades would have been relegated to “character” roles instead of “leading man”, but really came into his own during this span. Hey, it was the ’70s and all bets were off during this unique period, among the greatest cinematically of the 20th century1. 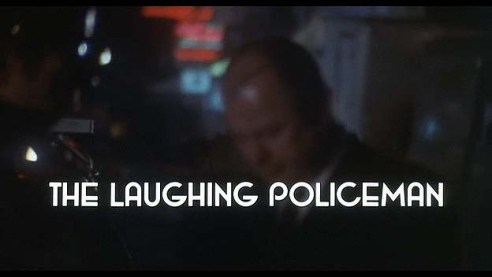 Guess I shouldn’t be surprised that an American adaptation of a Swedish police procedural during this space and time would veer the material so distinctly. Or that someone with the pedigree of director Stuart Rosenberg (Cool Hand Luke, The Voyage of the Damned, The Pope of Greenwich Village) would be the one who’d deliver it. My initial viewing had all the elements I’d expect from a ’70s crime film, even some of another San Franciscan thriller dripping with ’60s cool, packed into its 112-minute runtime.

Its singular mix of subtle and provocative, both a staple of the era and its Baghdad by the Bay setting (taking over for ’67 Stockholm), made for its sui generis way at solving mass murder. Interesting that the crux of the Maj and Per’s storyline was completely laid out in the first few minutes of the film, rather than how the bestseller’s group of detectives slowly pieced it together afterwards (along with blaming it on their country’s social problems). Not that there isn’t some of that here. 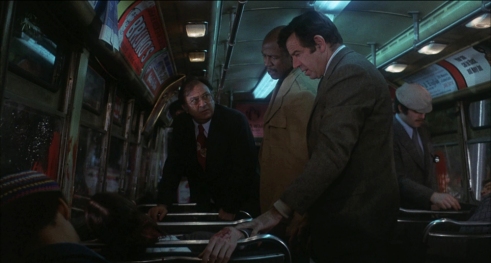 Screenwriter (and later Coal Miner’s Daughter scripter) Thomas Rickman made sure his The Laughing Policeman SFPD counterparts faced the timely racial and sexual touchstones its urban predecessors (Experiment in Terror, Dirty Harry) and successors (Freebie and the Bean, even 48 Hrs.) either hinted at or met straight on. Certainly, appearing way more open toward the city’s diverse LGBT community, before the acronym was ever bestowed, in the post-Stonewall San Francisco streets of ’73.

This definitely not Swedish investigators having their eyes opened to metropolitan massacre (à la gun-happy America) with a little female nymphomania on the side…no siree.

Not to say conservative or bigoted viewpoints were totally dispatched. Insp. Leo Larsen (the great Bruce Dern) held that end up nicely or uncomfortably…YMMV…when tasked to assist Sgt. Jake Martin (Walter Matthau in the lead Martin Beck role2) find the bus killer. To be sure, the character a forerunner to his southland detective in The Driver (1978), and a match in machismo and quotes, if I do say so. No matter how one cuts it, they’re the most interesting “couple” of the entire film. 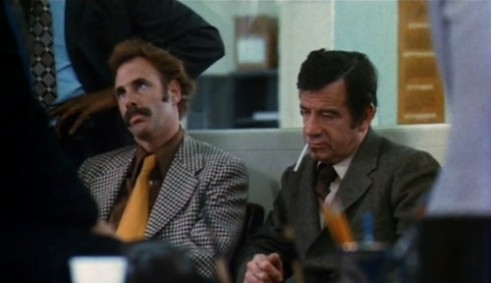 No doubt, being the living embodiment of the hangdog Droopy cartoon character, and a fine actor, Matthau emblematic of the decade like few others.

But, it’s Matthau, in the midst of a crime film trifecta (Charlie Varrick and The Taking of Pelham One, Two, Three bookended this) almost as impressive as Robert Mitchum’s revival that same decade, who anchors the film’s core. Even though his “Jake” a tad duller than Jack Nicholson’s L.A. counterpart, held his own against a veteran cast of scene-stealers. Notably, Anthony Zerbe, Val Avery, TV-veteran Albert Paulsen (who makes a surprisingly clever reappearance by the closing titles), and of course, Louis Gossett Jr.

“What ever you are reaching for better be a sandwich coz you’re gonna have to eat it!”

Each a standout in support for a movie concerned with realism in its depiction of the gritty work wading through strip joints, gay bars, or neighborhoods the police have less than cordial relationships with. 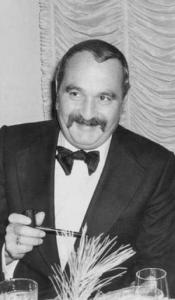 Despite that, viewers (okay…my wife who watched this with me) are left wanting with the few female personas in the novel’s distillation. Certainly, more of Cathy Lee Crosby‘s slain detective girlfriend than she was given3, and you can see why Joanna Cassidy‘s brief nurse role garnered attention early in her career4. Countered somewhat by the San Francisco location work director Rosenberg and cinematographer David M. Walsh pulled off that harkened back to Peter Yates’ and William Fraker’s famed doings in Bullitt (1968).

Not a bad model to try and emulate5, yet this tale comparatively harder to follow than needed without either careful viewing, or some foreknowledge of the source material.

As a few of us would suspect, the bloodletting in The Laughing Policeman followed the trend now set by that of Bullitt and Dirty Harry, let alone Sam Peckinpah’s (The Wild Bunch, Straw Dogs) impact echoing in American cinema at the time. For all that, the film remains a fine example of the avant-garde movement that pushed the police procedural forward. But perhaps it’s an even better character study for that turbulent decade — its excesses (both venereal and violent), and the period’s vitriol still looking for enlightenment.

“Oh, Jake, short lawyers — they worry me. Probably got enough juice to get a Sodomy beef reduced to Following Too Close.”

That little has changed, seemingly for some, in this time and space is purely coincidental, I’m sure.