I don’t know what it is about crime movies. Found I’ve watched and enjoyed a lot of them…and still do. Fairly regularly. Yes, I still manage to get in the drama-epics like the newly re-released Spartacus, the highly underrated Rob Roy, or the director’s cut of Kingdom of Heaven. Comedies like Blazing Saddles, too, and of course for last month, horror. The Shout! Factory’s recent high-definition release of Prince of Darkness deserving praise, especially for the John Carpenter-Peter Jason commentary track only Region 2 viewers could previously appreciate.

Still, I have a warm place in my heart for those that deal with crime in general. Plan on finally introducing The Godfather Part II for my eldest, having shown him the original (before it came to be simply, “Part I”) a couple of years back. Like these, there are plenty that meet the critical and box office kickoffs studios strive for. Yet, some crime gems came-slash-went when initially released, never attaining even a modicum of success compared to the likes of Goodfellas, The Untouchables, etc.

Quickly forgotten to the video store dustbin…if you’re old enough to remember such things, that is.

Perhaps, it was the film’s or the filmmaker’s, manner of depicting tough, remorseless content, or the conflict they exhibited, on low budget display. More likely, it was the greed and mayhem that made them so delectably watchable by us felonious diehards. No matter, I was thinking recently about these wonderful little nuggets of criminality that didn’t get much in the way of respect, critic appreciation, or just plain viewership outside of crime-movie nuts, or maybe the filmmakers’ mothers.

Time has forgotten them for whatever reason. However, they have been kept alive, if only on bare-bones, and nothing to talk about un-remastered, DVDs…for some. Or even, dare I say it, VHS (feel free to insert Quentin Tarantino here, if you’d like). Either way, count me amongst those who still enjoy the H-E-double-hockey-sticks out of these rough little jewels. I’m referring to U.S. films, but the likes of Get Carter, The Hit, The Long Good Friday, The Bank Job, Layer Cake and others deserve their own post…

Other honorable mentions that didn’t make this cut (hard choices with this limited number) include: Wild Things, White Sands, King of New York, The Limey, The Outside Man, Fast Walking, The Outfit, Very Bad Things, After Dark, My Sweet, Point Blank, Hard Eight, Bound, Hit Man, and the recent Blue Ruin. For this often-neglected list, most seen first-run in empty theaters by moi, I offer in chronological order my most-liked number of those who’ve met the grave, quixotic, and lawbreaking threshold in my head.

Prime Cut [Cinema Center Films, released July 1972, USA] – quoting from my opening titles post from a short while back, “A poetically violent Midwest tale of misdeeds with enough off-beat humor and style that helped define what was unique about this era of cinema in the first place.” A spotlight on a strange mix of criminals and Americana in the heartland that somehow works. One of my favorite Michael Ritchie, Lee Marvin, and Gene Hackman films, ever.

Hickey & Boggs [Film Guarantors, released October 1972, USA] – likely the most overlooked film on this list (and the hardest to find at one time), based on a Walter Hill screenplay that tells the tale of a couple of downtrodden L.A. private eyes in a way-over-their-heads case. Post-I Spy stars Robert Culp (who also directed) and Bill Cosby go hard and fast against their previous TV character images here in an underappreciated neo-noir that heralded the change for the private eye during this tumultuous era.

Charley Varrick [Universal Pictures, released October 1973, USA] – Another first-rate character piece within a crime thriller by film noir veteran (and Clint Eastwood mentor) Don Siegel. Walter Matthau portraying an old-pro bank robber, “The Last of the Independents”, forced to find a way out of a predicament…accidentally stealing mob money. One of the key films that influenced Quentin Tarantino to a good degree with its dialogue1 and story-telling.

The Yakuza [Warner Bros., Toei Company, released March 1975, USA] – The middle film in Robert Mitchum’s surprising ’70s crime film resurgence trilogy, and directed by the great Sydney Pollack. A tribute to the (at that time) little-known yakuza eiga crime genre paid no heed by critics or viewers back then, and truly a forgotten film worth discovering. Like Lee Marvin, no one could play “…weary and dangerous with that ease and assuredness” than Mitchum. 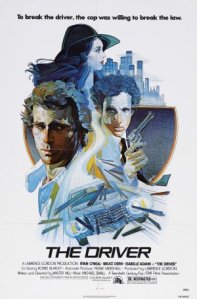 The Driver [EMI Films, 20th Century Fox Film Corp; released July 1978, USA] – an early Walter Hill project, written and directed by him, that got its roots from the Alain Delon French crime classic, Le Samourai. Spartan in its construct, the sold-short film just plain cool as it follows the exploits of a pure specialist, a getaway driver who has never been caught, through the means streets2 of late-’70s Los Angeles; my favorite Ryan O’Neal movie, period. 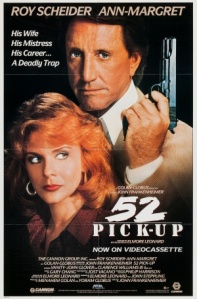 52 Pick-Up [Cannon Group; released November 1986, USA] – Director John Frankenheimer’s fine job with Elmore Leonard‘s tale of a straying businessman (well portrayed by Roy Scheider) being blackmailed by a sleazy pornographer (John Glover, who can do this role in his sleep). Another unjustly ignored film amongst the other sharp Leonard adaptations out there — its deceiving designed US poster likely gave viewers a misguided impression, at that. 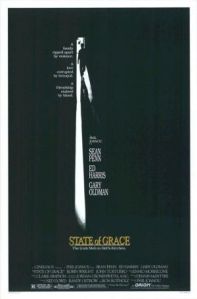 State of Grace [Cinehaus, Orion Pictures, Rank Organisation, released September 1990, USA] – A fine story of the under-told Irish mob (Westies) of New York City and loyalty among them. And though it’s headlined by Sean Penn, the best characters in this were done by its villains: the always great Ed Harris and the then under-appreciated Gary Oldman. A great and ignored mob tale…just disregard the criminally bad marksmanship that pops up during the film’s finale. 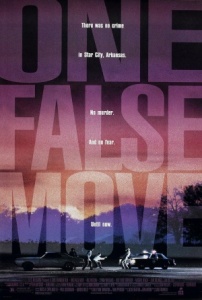 One False Move [IRS Media, released May 1992, USA] – Really one of great, small crime thrillers the ’90s regularly offered movie viewers (if they took a chance to see it). This the film that identified actor-AFI graduate Carl Franklin as quite the filmmaker3, and musician-actor-Billy Bob Thornton as a writer4 (screenplay by him and Tom Epperson). The story of a small-town sheriff on a collision course with a deadly trio has more than a few surprises by the time the end credits arrive.

Romeo is Bleeding [Polygram Entertainment, Working Title Films, Hilary Henkin, released February 1994, USA] – Gary Oldman stars as a corrupt police detective getting his due in between all of his corrupt schemes. Its cast peppered with a great many actors you’ll easily recognize, but it is Lena Olin who steals the show as one of the great female movie villains of all-time. The monstrous and sexy Russian hit-woman, Mona Demarkov — little wonder J.J. Abrams spotted Lena’s ease with villainy and used her in “Alias”.

Fresh [Lumière Pictures, Miramax, released August 1994, USA] – Another of my favorite films of the period, and the best of Boaz Yakin’s career, I’m certain. Fresh proved you don’t need big names or budget to tell a remarkable little crime tale, featuring, for the most part, a young cast in a gritty story. One at the periphery of a stylish New York City showcase of the time, surviving as best they could. Sean Nelson, Samuel L. Jackson, and Giancarlo Esposito the standouts.

City of Industry [Largo Entertainment; released March 1997, USA] – a hard little crime tale of a pulled-out-of-retirement pro (a role tailor-made for Harvey Keitel) forced to avenge the post-heist death of his brother by his getaway driver, and so-called partner — Stephen Dorff doing what he does best in the role. Much like their previous work, surely à la Reservoir Dogs, you have Keitel and Dorff upholding long-lost codes of honor, and lack thereof, among the criminal set. 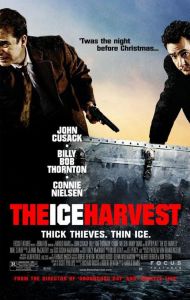 The Ice Harvest [Focus Features, Bona Fide Productions, released November 2005, USA] – A thoroughly underappreciated neo-noir featuring enough mayhem and cold-hearted actions that belie its Christmas time setting. Basically, an antithetical retelling of “It’s a Wonderful Life”, and unfairly dismissed back in ’05 by critics and audiences — much like those did in 1946 with Frank Capra’s masterwork. The film has now become annual holiday viewing in my household, to the chagrin of family members.

Killer Joe [Voltage Pictures, Perfect Picture, Worldview Media, ANA Media, released March 2012, USA] – Lastly, I’ll quote from Andy Hart’s recent piece for a film we’ve in common this week. “William Friedkin’s tale of murder set around a dysfunctional Texas family is often violent and repugnant, but it is also brilliant mainly because of a star turn from a resurgent Matthew McConaughey.” Nailed this nasty, if intriguing, piece of work, if I do say so. Certainly a good one to conclude with, too. 😉