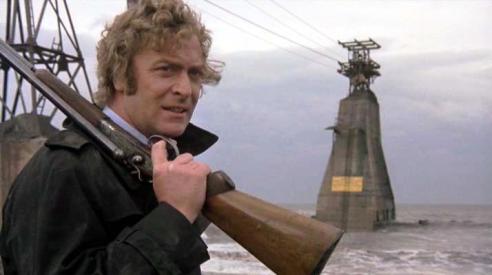 This film post, a reprise of a celebratory piece I wrote for Edward Copeland’s blog over a year ago for this stellar British crime film on its 40th anniversary, is being re-published as part of the Scenes of the Crime blogathon hosted by Furious Cinema, Criminal Movies, and Seetimaar – Diary of a Movie Lover.

When director Mike Hodges’ first feature film debuted 40 years ago on this date, I don’t believe it made much significance on the moviegoing public at the time. For us here in the U.S., we were just leaving winter (and the ’60s weren’t that far off in the rearview) and happily expecting better forecasts in our future. The fact was we were just starting a decade we wouldn’t truly begin to regret since it hadn’t fully touched down as yet. But for all the uncertainty and controversy which followed the waning years of the Vietnam War, that same atmosphere would go on to have a distinct and triumphant impression on the cinema of the time. Few realized what was coming in the next 10 years (the economic downs that commingled with the dark, creative ups in motion pictures) till it was all over. The exception surely was the state of Hawaii who somehow caught a foretaste of the said upheaval via the weather. They were still picking up the pieces from the winter storm of 1971 when Mr. Hodges’ movie landed two months later. And just like that little-remembered climatic event (except for those who went through it), Get Carter “left its mark.”

It’s been a remarkable ride for this tale as it has made its way across movie screens (mainstream and revival), VHS rental tapes, and disc players over the decades since. Get Carter has gone from being despised as a motion picture, especially by United Kingdom critics for its violence and nastiness (even seen as a threat to U.K. tourism), to an anti-establishment cult film (especially after its initial release and the political corruption of Watergate, Cold War tensions, nuclear threat, oil-crises, and the like settled in with a flourish), and later entering the Valhalla of the British Film Institute at the 16th position on its BFI Top 100 British Films of the 20th Century. Total Film some years later went one better and named it as the top film in its list of 50 Greatest British Movies Ever. Scanning both lists, and the distinguished films this feature accompanies, should gather those who’ve not experienced the movie around for a long denied viewing, IMO. Not bad for little crime film and its story of a British underworld figure seeking revenge for his brother’s murder in the grim outskirts of England no one puts on the travel brochures.

“You’re a big man, but you’re in bad shape. With me it’s a full time job. Now behave yourself.” 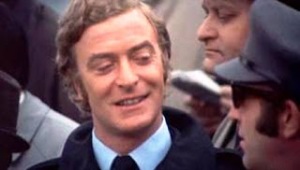 Jack Carter is a man no one in their right mind wants visiting them (in London, or anywhere else). Jack works for mob bosses in The Smoke, and by all appearances is particularly adept at getting his (or their way) when called upon. The fact that he possesses an almost angelic face with a contradictory, and especially unpredictable, harsh nature is a plus for a racketeer’s curriculum vitae in this line of work. Michael Caine, fresh off the ’60s with roles such as Harry Palmer and Alfie, and in films that ranged in variety from Zulu to The Ipcress File, and The Italian Job to The Battle of Britain, at first wouldn’t seem a good fit for a nihilistic film adapted from the noirish Ted Lewis novel, but he proved he was up for the task. He mastered the unlikable attraction quality and garnered movie viewers over time with this character. Surely, up until this role, audiences thought they knew what to expect from this actor. He was affable in a way most Americans find appealing in actors from “across the pond.” There are those familiar aspects in the film. His initial screen introduction is a measured, fastidious presentation meant to follow some well-worn ground… till he, and the newly minted screenwriter/director, drove it off a cliff, that is. When it came to this film, only one hyphenated word would suffice thereafter: game-changing.

The rest of quote that’s part of this post’s title may bring some clarity on this, and help establish the sober tone for the picture and this character:

Contempt for the powers that be (on either side of the law) was evident throughout ’70s cinema. This is hinted at when Jack’s own management attempts to warn our dark protagonist off looking into his brother’s death at the start of the film. It is for their own protection, not his. They simply don’t want, or trust, their “Doberman” going off the leash in this regard. I’d say Caine’s interpretation of a British gangster was so eye-popping, you’d have to wait until the start of the next decade for another quite like it. That being Bob Hoskins’ Harold Shand role from The Long Good Friday (although people keep telling me that I should checkout Richard Burton’s Villain as they believe it is in the same league as those). Jack is a fiercely singular character, and the film does an excellent job at conveying that fact. Years later, Hodges would note that real British gangsters afterward came to him and expressed, proudly, “…they were really pleased with this film.” Obviously, this feature had a distinct impact. Even in a year that released such remarkable motion pictures which spotlighted lone characters butting up against decaying-from-within societies (Dirty Harry, Straw Dogs, A Clockwork Orange), “the little film that could” managed to shove its way on to that level much like Jack does with his Northeast England counterparts in the story, even if the filmmakers didn’t have such expectations.

“Frank said you were a shit and he was bloody well right! You even screwed his wife, didn’t you?!? The poor bastard didn’t even know if the kid was his!”

Think about this for a moment. Mike Hodges, who accumulated some British TV fame from 1963 to 1970, delivered his first big screen movie (with a striking and lasting anti-hero) in record time — and with few applauding or recognizing how great an achievement it was (film critic Pauline Kael being one of the early lone admirers). Add to that, at the midst of its story, it contained the unspoken dirty secret of the pornography trade. Note Britt Ekland’s character’s discomfort in being in the same room as the bosses are watching the “porno” at the beginning of the film. In the context of the time, the subject was not spoken of in polite company. It’s a taboo the film was unafraid to cross in the telling of its story (note, Gerard Damiano’s own game-changer, Deep Throat, wouldn’t début until the next year). Regardless, all of this happened under what the director termed as a “white heat” schedule:

“… getting the book, doing the deal, writing the script, finding the location, making the film, editing it… it was like 36 weeks.” 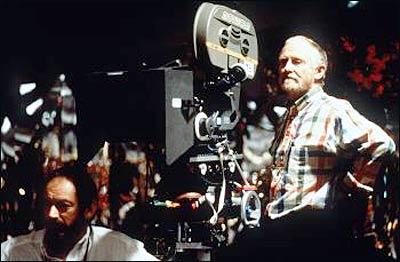 That he could turn it all around in such a short-term (shooting took up only about 40 days) is remarkable in itself. Let alone carrying off what’s now considered “among the pantheon of British cinema classics,” as noted by author Steve Chibnall in his excellent film guide of the film. It’s unheard of, even for back then. And he accomplished it using the location of the windswept, industrial, and dismal setting of Newcastle of the time. Contrast that with Francis Ford Coppola’s The Godfather release in 1972 with its glamorous New York City, Hollywood and Las Vegas whereabouts for its gangster backdrops, and you can see part of the reason many consider Hodges’ film astonishing.

The remaining cast, like the pubs and rundown urban housing (along with the local faces) used throughout the cold canvas of the piece, was equally adept at joining in the predatory mood Hodges built into his film. For American audiences, outside of Caine and Ekland, not many were readily recognizable. Still, they were a terrific lot. Originally, the director cast the solid Ian Hendry (who would eventually oppose Vincent Price in the splendid Theatre of Blood film a couple of years later) for the role of Carter. But as it’s almost always the case, the bigger star won out for the lead. It was a sore point for the actor, but it produced a tension between he (Hendry moved over to portray Eric Paice) and Michael Caine that made their scenes together crackle. John Osborne, Bryan Mosley, Geraldine Moffat, Petra Markham, Dorothy White and the rest contributed a great deal in making the “trip up north” quite a memorable (if not a little uncomfortable) experience. DP Wolfgang Suschitzky’s camera work should also be lauded. The stark visuals depicted (particularly those used in the impressive main title sequence on the train and the closing scene along the desolate dark shores of the city) make this vividly clear to those who’ve watched the film more than a few times.

“I should know. I’m the villain in the family, remember?”

Get Carter remains a bleak, if not ferocious, little gem. As with films such as The French Connection (which also came out later in the same year), it heralded a time and an avant-garde set of pictures — many notably in the crime genre (a category of film that up until that time didn’t get the respect it deserved) — that epitomized the anti-hero for that particular decade. While Friedkin’s gritty picture is a cop film through and through, Carter is decidedly on the other side (of the law and ocean). Like films of the era, Get Carter mirrored the disillusionment of generations, new and old, with their establishments. Mike Hodges, as William Friedkin did in his hard-boiled classic, was forward-looking in introducing a character few audiences could like, but found themselves inevitably empathizing with among the ruins. If you dig the ’70s style of movies, this one has it in spades. While the finales for both of these 1971 films would be considered less than satisfying in any of the 10 years which bracketed The Me Decade, each of those endings sure worked on-screen.

“Are you coming in, or you going to piss about all day?” 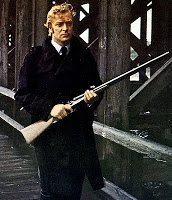 All of the films mentioned set the standard for the era, I think. And Hodges’ film very much embodied that unique decade — and it sure went out of its way to say the Age of Aquarius was definitely over, didn’t it? Get Carter‘s uncompromising and unpromising tone (some would say it has a misogynistic take), alongside with its ultimately bleak resolution, was the point. Over time, the film has accumulated more than its share of enthusiasts on either side of the Atlantic (crime film aficionados can spot its influence on both Quentin Tarantino and Guy Ritchie’s work). There’s no doubt in my mind, it (and others) marked a turning point in cinema. The later The Friends of Eddie Coyle and Charley Varrick also come to mind. If there’s a worthy remake to take in (as it seems there must be in today’s market), I’d recommend the almost scene-for-scene black-exploitation flick, Hit Man (with Bernie Casey and Pam Grier). It was an American redux in the same spirit of the original — I’d also suggest steering clear of Sylvester Stallone’s 2000 film of the same name as it is the antithesis of a ’70s film, IMO. Lastly, the films of this decade seemed to exhibit their own riff on the cinéma vérité style of moviemaking. That this exceptional film in particular was distinctly British shouldn’t be surprising. It had an inroad to connecting audiences separated by a common language as it were. We, the crumbling empires (old and new) of the time, had a lot in common. And self-destruction was the name of the game way back then. Plus, the film did have an old-world charm to it… even as it swung that shotgun down on to someone’s head.