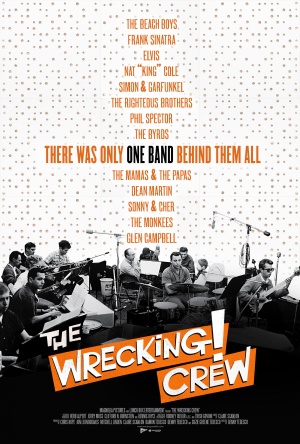 Rarely, if ever, have I reviewed a documentary, even though I watch as many as I can during any given year. Over time, I’ve developed quite an affinity toward those movie, television, or radio programs that center on providing a factual record of a subject worth knowing. Recently, watched one that pushed me to rectify the incongruity. A musical documentary that had arrived at and echoed out of the 2008 SWSX film festival.

Now, finally reaching a wider distribution beyond the special screenings only handfuls got to enjoy in the years since.

The Wrecking Crew a labor of love, surely. Not only for the remarkable music that came out of the 60s and a portion of the 70s that forever branded a generation of listeners like me, but those behind the budding hit-record machine of the era churning out those distinct sounds. Besides the fact director Denny Tedesco‘s father was one of its key members doing just that across many of the Los Angeles recording studios dotting the sun-filled landscape.

Growing up in L.A. during the 60s as I did, all of the music that came out of the decade the vital fabric that held those unique experiences together. What backed it all completely unknown to me. Oblivious to the skilled service of a group of studio session players, later known as “The Wrecking Crew.” The adept band of performers that provided the back-up instrumentals to various legendary recording artists. From Sinatra to Elvis, The Byrds to The Beach Boys, and everyone in-between.

This doc brought it all home via personal recordings, vintage stills, the music and the recollections of those who laid it down on tape back in the day.

Perhaps, music is generational. But the songs recognizable by many of my peers, a good deal of whom were at the same The Landmark West L.A. theatre screening last Sunday, dropped us into a time machine. Schooled movie-goers and music fans alike in the ways record producers of the age relied upon these talented musicians who’d made their way to Southern California. Hungry to make a living accompanying singers performing the rock ‘n roll, rhythm & blues, and soul their elders frowned upon.

The Wrecking Crew film documents the rise of a set of musicians who didn’t show up in the shirt, coat, and tie of their established forebears who competently cranked out only what was on “the sheet.” This jean-clad assortment unafraid to tackle the creative music grabbing the youth of the day, whipping them into a frenzy. A number of them trained as jazz musicians, and thus more readily open to give back input and the improvisation that marked their tenure.

Legions of music fans have held many of their renowned riffs dear for decades, without knowing they came from session musicians the producers kept in obscurity. 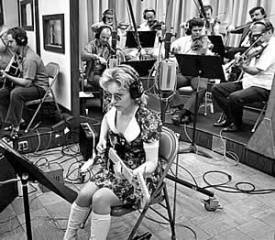 Denny lovingly set down and opened up the musical history that filled his legendary late father Tommy Tedesco’s professional and personal life. Not only spotlighting him, but the likes of drummer Hal Blaine, the pioneering bass and guitar work of Carol Kaye, the celebrated Don Randi, Plas Johnson, Joe Osborn, Al Casey, Earl Palmer, and dozens of others who sat in on a number of the well-known hit recordings marking the decade. Now on record and wonderfully chronicled, at last.

Deft comments by music luminaries like Dick Clark, Brian Wilson,  Frank Zappa, and others enrich those of the crew members, throughout.

An amazing who’s who of the time the group supported on most of their chart-toppers. Beyond those already mentioned: The Association, Sam Cooke, Sonny and Cher, Glen Campbell and Leon Russell (Wrecking Crew members who went on to their own careers). The Mamas & Papas, The 5th Dimension, Captain and Tennille, The Righteous Brothers, Simon and Garfunkel, Nancy Sinatra, The Carpenters, Tommy Roe, The Ronettes, Pet Clark, and Herb Alpert and the Tijuana Brass, among others.

To say nothing of TV’s The Monkees, whose controversy of not playing their own instruments on their early songs initially open eyes to label producers’ practices in turning out hit-after-hit back then.

The Wrecking Crew portrait more than the talking head, needle-dropping song variety. The personal stories, many expanded upon in Kent Hartman’s 2012 book, The Wrecking Crew – The Inside Story of Rock and Roll’s Best-Kept Secret, given added weight. Here the mix of storied background, alongside those playing their famed contributions these many years later, lent a tuneful immediacy the text only hinted at. Brought smiles, laughter, and head-bobbing joy as a result throughout the viewing.

As Leonard Maltin noted in his praise-worthy review,

“It’s taken Denny Tedesco seven years to get a proper theatrical release for his joyful documentary The Wrecking Crew, after years on the festival circuit, but it’s been worth the wait. This is a loving tribute to the studio session musicians who populated hundreds of hit records, primarily in the 1960s.”

Certainly beyond the so-so ’68 action flick another “crew” beneficiary, Dean Martin, starred in.

Indeed. Like him, I too “…didn’t want it to end.” And I’m not saying all this because, full disclosure, I was one among many who threw in cash to the Kickstarter project that contributed some to pay the final music licensing costs to enable the current theatrical, iTunes, On-Demand, along with the eventual DVD, release. No, the subject captured me long ago, in my formative music-listening years. Way before I ever heard of “The Wrecking Crew.”

What brought me to this documentary screening, in a darkened movie hall with similarly aged fans, along with my newly bass-playing daughter, filled to the brim with the music of my life, was set way back. When “The Wrecking Crew” first laid down these tracks. Waited a long time for this, and was not disappointed with the final results1. Denny Tedesco’s documentary honored his father in a way that elevated this extraordinary group of musicians out of anonymity.

Quite a tribute of their reign during this noteworthy and finite era, which was long overdue.

“There was only one band behind them all.”