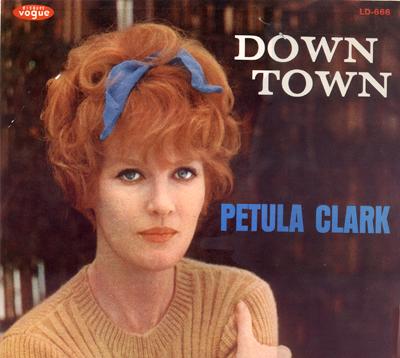 First crushes happen to everyone, including listeners of pop music. Perhaps more so for the latter since the eyes and ears are also involved. Mine would be with the girl from Epsom, England, as the British Invasion began cresting. Petula Clark‘s burst on the U.S. scene with The Ed Sullivan Show on March 14, 1965. Captured this 10-year old’s heart back then watching grandma’s TV in the living room. Hasn’t ever let go.

Forty-five minutes after touching down at the airport, Petula would sing her hit on air without benefit of rehearsal.

Though she was a child actress, with credits and had a handful of U.K. music hits to her name, it wasn’t until composer-producer Tony Hatch latched on and presented her with a song that would smash records and launch a singing career worldwide. That would be the one she sung on Sullivan’s show that night:

Without a doubt, “Pet” lit up radios and TVs for the next few years almost as well as her Beatles cohorts. Her run during this phenomenal stretch of British rock and pop acts surpassed only by a choice few. It really represented a magical music spell for the team of Clark and Hatch. The height reached both for singer and composer-producer being remarkable. With material and orchestration key components in the success.

As well as Petula herself, of course.

At the midpoint of the 60s, the product the pair put together for the airwaves offered a comforting, somewhat familiar sound for older listeners. Certainly, non-threatening in this shake-up period. Yet, she still drew the younger crowd, who were already clamoring for counterculture from the other side of the pond. Pet Clark’s voice and vitality, along with her looks, and Hatch’s stellar lyrics and arrangements, had few peers.

To a great extent, his use of some fine British horn work, along with excellent production values, in most of the singles and albums he’d produce would be the essential ingredients in many of their hits together.

The instrumentation in this set of song a throwback of sorts to the vocal stylings of the 50s and its big band era. Though now souped up with the distinct buoyancy and the creative lyrics this decade would become known for. That is, before British psychedelia and symphonic rock overtook the stage. They’d have this corner, albeit short-lived, of the British Invasion almost all to themselves from 1965 to 1968.

I know this is ancient pop music history for most reading this, but what a time it was for us starry-eyed preteens learning about love in city districts and people’s hearts as voiced by Pet.

With all due respect Petula’s live performance on Ed Sullivan, the studio cut is what stands the test of time. Why it shot up to #1 in the U.S.1, frankly. Written by Tony Hatch upon a visit to New York City, it captured both the loneliness and social contact of metropolitan life with a distinction hadn’t heard before. From the opening piano chords to an insistent and grand orchestration, with some prevalent brass horns backing it up, Petula’s song never loses its striking rhythm and sheer vitality that made it her and Tony’s trademark.

I Know a Place

As much as a chart-topper puts one in the limelight, it’s what you do next that makes or breaks a music career. Her follow-up hit “I Know a Place”, which also dealt with city life and written by Hatch2, is what cemented “Pet” into fans hearts (certainly mine). Set in a similar vein (with another piano start and steadily keeping the backbeat) of youth gathering carefree in the midst of the city who’ll, “Soon I’m sure you’ll be tappin’ your feet Because the beat is the greatest there”. Credit Hatch for knowing what worked.

Allmusic‘s Joe Viglione said it best: “…Petula Clark’s third U.S. hit “You’d Better Come Home” in the summer of 1965, was a bit of the style that she was successful within Europe prior to her “overnight success” in the Americas. This two-minute and fifty-six second Tony Hatch composition owe much to Burt Bacharach, Hal David and Dionne Warwick’s earlier successes, and the Clark/Hatch team were not only aware of that style and the substance that brought Dionne so many hits, they emulated it as well as.” 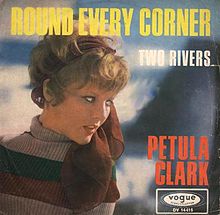 What’s interesting in this her fourth American hit was her contrasting popularity in her native land to North America. Her singles in the UK charted lower (sometimes unusually so) than in the U.S. and Canada. The latter buoyed the highest as a whole. This was her “anti-protest song” in ’65. Again, Joe Viglione nailed it, “These two minutes and forty-two seconds embraced the positive sentiment of her first hit that began the year, “Downtown”, a philosophy that there are good things waiting in the heart of the city “round every corner.””

Any perceived slippage for the British pop diva was quickly rectified by the end of the year with a tune Hatch wrote on his flight to Los Angeles. Recorded here in the States with help of the famed group of studio and session musicians known as The Wrecking Crew. “My Love” a vibrant showcase for Petula’s pipes and Tony’s lyrics in a way that vaulted the singer back to #1 (U.S./Canada), with a top-five back home. Ms. Clark hated her vocals and thought the song flat. Imploring it not be released. The lyric, “Now it only goes to show how wrong we all can be”, spoke for itself. 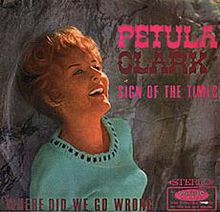 “Sign of the Times” the head-scratcher hit in my eyes3. One of her lowest charted back home (so wrong), a top-ten hit in Canada (where it should be), and hovering just outside that here in the U.S. Perhaps the title threw fans off, expecting a socially conscious song. What they got was a straight-up love song, with Jackie Trent now adding to Hatch’s lyrics. More percussive than previous singles, it was nonetheless an energetic vehicle that brought back the brass accompaniment from earlier hits with passionate lyrics that fit Pet’s style to a tee.

I Couldn’t Live Without Your Love

More consistent success came with the next single, one of Petula’s favorite hits of the period, “I Couldn’t Live Without Your Love”. The stirring song came out of the affair Tony Hatch began with his co-contributor, the English singer-songwriter and actress, Jackie Trent. Likely one of the most heartfelt numbers associated with the Clark-Hatch tandem, now augmented by Trent who’d marry Tony (his second). Builds from a now-familiar piano refrain into another horn-filled arrangement and a strong vocal crescendo by Petula. 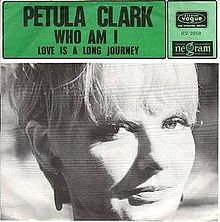 Little wonder the singer and her writing tandem ventured anew in song, given their success with what was now a well-worn formula. Thus, “Who Am I?” arrived in ’66 with only a modest result in North America, and almost downright rejection in the U.K. Employing the mid-60s vogue at the time in its production that involved the Baroque-era keyboard instrument seemingly everywhere back then, the harpsichord. Believe me. One of my least favorite, but it was a sincere effort to finally be socially aware during this period.

The “Colour My World” single was the attempt to rebound from the poor result of not making the UK Top 50 with the previous, “Who Am I?” Again experimenting with different song instrumentation, Hatch this time employed another distinctly 60s element. The Indian sitar. Again, more successful on this side of the pond (and Down Under) than in Britain (once more coming up short of the top 50), it’s an under-appreciated number that exhibited producer Hatch’s telltale touches with some new aspects for Petula to explore.

This Is My Song 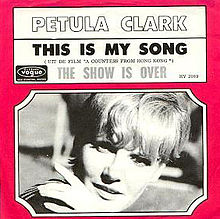 Righting the boat, Petula’s tenth hit single in a little more than two years arrived care of Charlie Chaplin. Yes, that Charlie Chaplin. Written for A Countess From Hong Kong by Chaplin, who wrote/directed the film, was an unexpected pop hit4. Pet thought it too old-fashion, better suited for her to sing in French (“C’est Ma Chanson”) and German (“Love”). But the Ernie Freeman-arranged and Sonny Burke-produced song — Hatch balked at working it for Pet — convinced her it’d work in English. It’s the Yanks who got this right.

Don’t Sleep in the Subway

Another of Pet’s personal favorites of the period, “Don’t Sleep in the Subway” probably one of the most interesting musically for this team. Written by the now-married couple of Tony and Jackie, the hit single offered come-hither lyrics likely in keeping with the 60s sexual revolution going on. A top 5 hit in the U.S./Canada, dipping to #12 in the U.K. With some notable chord progressions/styles, the wonted opening, injected with the symphonic before returning to her familiar flair with a love song, it’s quite a mix.

The Cat in the Window 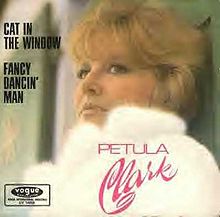 The second attempt at replicating her success of “This is My Song”, and something not written or produced by Tony Hatch, proved anything but. Without question, my least favorite of hers in the era. Already, Petula had made a mark into the “Easy Listening” category, but this only played to that “adult” genre. Therefore, youthful pop music fans ignored it and had already begun to move away from “Pet” and the style most associated with the artist. This the lowest she’d dip musically and across the charts during this stint.

The Other Man’s Grass Is Always Greener

Once more, it was no surprise Petula returned to her foundational tandem of Tony Hatch and Jackie Trent with her next single. And again they’d all respond with something solid, though now happy with more modest expectations for success. Another number that starts off sedately, building to Clark’s preferred vocal climax and the well-known horn backing Hatch favored. A style now fast fading in Pop, but performed with the usual rigor and diligence one would expect from British music professionals.

Probably the best song title for this stage of Petula Clark’s extraordinary career. Though the great Tony Hatch was loosely attached (he’d only produce), Les Reed and Barry Mason wrote this pining number. Another comeback tune — a Top 20 and 10 in the U.S., Canada — that returned her to the Top 50 back home, “Kiss Me Goodbye” would wear its emotion on its well-worn sleeve. Perhaps a bit maudlin, the song would be the last flicker at popularity. Effectively closing out Ms. Clark’s mainstream pop hit career in North America.

The “Don’t Give Up” single would be her last hurrah in 1968 with Tony Hatch and Jackie Trent, back in their accustomed places. Sadly, it didn’t amount to much. Only a fleeting shadow of this tandem’s successes. One that bred hit-after-hit for a good portion of the initial British Invasion. They’d very much impacted these shores no matter how one imagined or measured it. Petula Clark would still have success overseas in Europe while maintaining a loyal following in North America in the decades to come5.

Going back to acting, she’d star alongside Peter O’Toole in the 1969 American musical, Goodbye, Mr. Chips. Oh, and receive a Commander of the Order of the British Empire issued by Queen Elizabeth II before the 20th Century closed out. Tony Hatch would continue to make a living writing, producing, and arranging numbers with customary skill across the music, theatre, and television fields. But for a time, during the revolutionary and creative 1960s, the pair would have our full attention.

For a few short years, joyously directing those like me to buy and play the winsome Brit’s albums and 45s, and listen to our young heart’s content.