This is the next entry in a Theatre… a Movie… and a Time, a series that was begun here. Last year, I did one of these for a TMT entry within days of a certain film screening. A recent gathering of die-hard fans for a specific film seemed to call for another of this ‘fresh’ variety. The odd title for this specific post comes from a line on the guide sheet I was given for my latest bit of cinematic-husband-craziness. May I have a drumroll for my wife’s lovely eye roll, please? 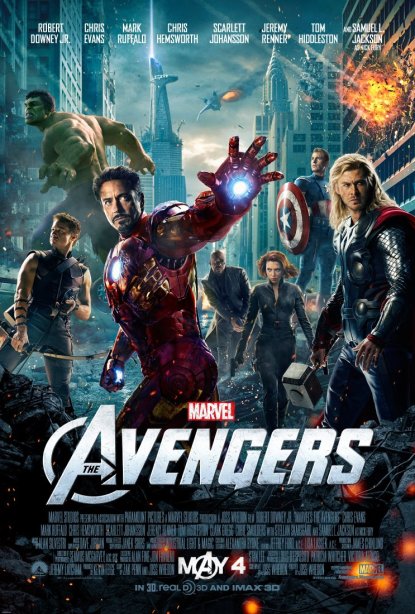 May 4, 2012: a couple of weeks ago, my visiting sister-in-law mentioned the law enforcement agency she works for offered tickets to employees and their guests to see the inaugural blockbuster of the summer season, The Avengers. On opening day. “Are you going?”, we asked. “Please,”, she responded, “…who is crazy enough to get up at o’dark-thirty to catch a movie? The special screening is at 4 AM!” Let the record show that my wife just pointed. Then, they both looked over my way.

What could I say? “Yeah, I’d go.”, came my reply. I mean, given that this highly anticipated movie was going to happen at the El Capitan Theatre, right across the street from the ‘Chapter 11’ Kodak Theater and its famed neighbor venue, why wouldn’t I? Needless to say, I bought two tickets. Disney’s premium movie hall on Hollywood Blvd. is well-known in these parts:

“In 1991, the former Paramount Theater was reopened by Disney and Pacific Theaters following a glorious restoration of this Hollywood gem situated across the street from Mann’s Chinese. As the flagship theater of the Disney Studio empire, it is part of the Pacific Theaters circuit of which Disney owns a large stake.

Every major animated release from Walt Disney Pictures Animation premieres here complete with a live stage show and more. The theater was the first in the United States to announce an online movie ticketing and printing system.”

This boisterous, brimming screening followed the equally packed 12:01 AM showing, believe it or not. I saw those patrons heading back to their cars as I arrived, and I got there just before 3 AM (having dragged myself out of bed at 2 AM to get myself ready). I was in line (yes, there were plenty of folk already there) by 3:05 AM. The father of my daughter’s schoolmate, another one unafraid of wifely ridicule, joined me, in fact.

We were greeted and entertained as only Disney can in a place like this. How was the movie, you ask? I think my blogging colleagues over at Radiator Heaven and The Focus Filmographer nailed both of our giddy opinions and reactions with their reviews, found here and here. Needless to say, I got to work fairly early that day.

33 Responses to “TMT: “Your suggested arrival time is 1 hour before the movie.””