This is the next entry in a Theatre… a Movie… and a Time, a series that was begun here. One of my favorite sites to haunt online, whether at home or work (I’m sure my work’s internet filters catch far worse to block) is director Joe Dante’s Trailers From Hell. I continue to give him, and his trailer gurus, credit in bringing up movie memories. In this case, director Jesús Treviño‘s splendid look at one of my all-time favorite westerns. 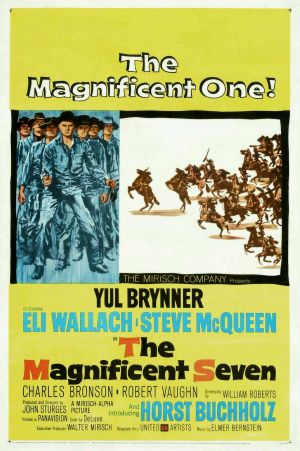 November 1960: When I was six years old, it was a different time. I’d been living with my maternal grandparents for about two years. My mother always lodged nearby, though. Watching TV or sending kids to the movies, a form of babysitting. Especially for the seniors now dealing with a rambunctious youngster in their midst — the grandchild that never went home. Thank my grandma for that one.

My grandfather a first generation immigrant via Guadalupe, Mexico and Texas. Former widower, like the woman he married, too. A retired haberdasher and fairly quiet man, he always dressed smartly. Moreover, he loved his seven children equally. Oh, my mother adored her father. He’d visit her regularly, especially after her illness and hospitalization. Didn’t have much patience for me, however.

I reasoned because mi abuelita played favorites, among her own children, and particularly her nieto.

Most of the time, I was a bit intimated by grandad. My cousins, too, subdued around him. On the rare occasions my mother’s madre didn’t take me with her to her doctor’s appointments, or shopping errands, he’d watch me. To stay out of trouble at home, he’d point me to the television in the living room. Or hand me his change to take in a movie whenever we were in nearby Huntington Park.

Better than chasing me about.

Westerns had become a regular pastime, as a consequence. Being drawn to The Magnificent Seven after its release, a given. For him, too. The Huntington Park Warner Theatre, and their double-features, a customary venue many in our family ventured. I don’t recall what the second flick on the bill was, nor did I care. The rousing film enthralled us two so completely. Way before I’d ever learn its origins.

The film’s distinct gun reports echoed in my head for years after that. I’d only have to overhear one shot on later TV replays to recognize the western, and the first time I saw it. Even so, there’s another fortuitous aspect to this recollection. Nothing directly to do with the film itself. More of who. The writer-director, also from Tejas, narrating the trailer for the Trailers From Hell clip. What is it you ask?

Jesús shares the same surname as my grandfather — Treviño.