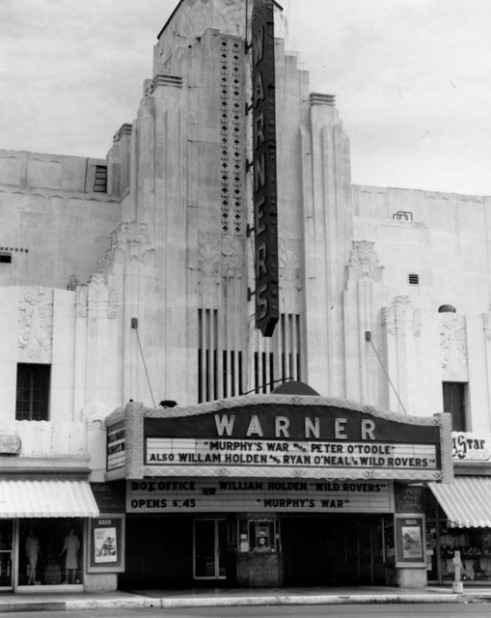 After being promoted by attrition to lead projectionist at the Huntington Park Warner Theater, following an all too short stint of a few months showing movies, I attempted to settle into a semblance of routine. The summer of 1976, though, threw that totally out of proportion with its arrival as I completed my college spring semester. The result of which gave me more time to work.

And more work hours meant more money in my pocket, which simply fed my preoccupation of dating young lady friends at the time — the woman who’d become my wife many, many moons later would refer to this as an HBL thing. At least for those I’d dated, the sad economic fact this young male learned early was attractive girls rarely had dirt-poor boyfriends.

Work-wise, I assumed most of the day shifts as the new lead projectionist. The cost being the wearisome once-a-week chore for drop-off/pick up of the old and new film cans, along with setting the marquee and weekly movie schedule. That, and field every technical issue that arose, as well as train each and every new projectionist we’d need and hire till mid-1977.

No longer could I depend upon my younger brother, the guy who instructed me. I was that guy, now. However, being 21 meant you know it all and think you can handle whatever’s thrown your way. Oh, and you are immortal — no matter how many stupid things you do, or simply get away with. I was confident I’d been taught, more than adequately, every little thing a projectionist needed to know to do the job, and get paid for it.

It’s also said God has a wicked sense of humor… So, on one bright and warm early summer day, half-way into the second reel of the first movie that day, he proved it. Isabel, the older woman who represented adult supervision at the venue in the box office gave me a frantic call on the projection booth phone. It went something like this:

It’s amazing what goes through your mind when you’re confronted with a situation like this. One tailor-made for the stress-response, I reckon. Let’s list a couple, shall we?:

Luckily, as part of my edification, my brother taught me how to shut down things in mid-stream, bring up the house lights, and (via the house PA) ask patrons to exit the building in an orderly manner due to a technical problem. But before I did all of that, I kindly pleaded Isabel not to leave and to call the Huntington Park Police Department to report the bomb threat.

Keep in mind, back then this meant a direct call to the P.D. as L.A. County‘s emergency 9-1-1 service wasn’t implemented till the fall of 1984. Coming down those stairs from the 4th floor booth also gave me plenty of time to assess the job and my life to that point — both of which didn’t take very long. And by the time everyone was out on the sidewalk in front of the theater, a patrol car had arrived on scene.

Huntington Park Police Department wore similar to LAPD‘s uniforms while South Gate‘s (where I still lived) wore the khaki top and olive-green pants like those of the L.A. Sheriff‘s.

By then, I had started to relax…you know it had to be fleeting. The patrol officer, wearing his dark blue uniform, approached and asked who called it in and of the threat. The two concessionistas and I (representing just about the entire theater staff) huddled around Isabel and the officer to hear all the details. Truth be told, we basked a bit in the safety the officer’s authority offered in such a situation. Again, short-lived.

When she finished and the patrolman was satisfied with account he looked over in my direction and told me to come with him. “Where?”, I heard myself ask. He pointed to the front doors of the theater and mentioned that’s where the caller said the bomb would be found. Dumbfounded, I bravely proffered my next question: what qualified me for such an honor? (as I was pretty damn sure that TV movie I saw didn’t cover this scenario) His response was succinct:

No doubt seeing my hesitant face, he also assured me that this was likely fabricated, a hoax. In all probability done by someone who was annoyed at the theater or the owner, or drunk, and just wanted to make us sweat. Looking for a reaction, that’s all. I was placated, somewhat, with said divulgence, right up until…

Officer: “And for god’s sake, don’t touch it if you find something.”

If you look at Bill Housos’ photo to the right, it shows the Art Deco grandness of the north balcony staircase. I know this because the two sets of stairs going up to the terrace level were attached to an anterior wall at the front of the theater — the North on its left, the flipside that was the south stairs on the right. The open doorway in the background of the image, on the first floor, being the Ladies restroom.

Even though we surely qualified as the odd couple in some bad, hackneyed buddy picture, we headed into the Warner as one. Why we checked out the restrooms first, I still have no idea to this day…other than they were close by to the entrance, on opposite sides of the house.

We then split the main hall (first floor then balcony) in two. He did one side, and I the other. We walked down every aisle, and looked at each seat…top and bottom, with flashlights in hand. As I searched, all I could think was I didn’t know what the hell I was looking for. Plus, wondering if I’d make 22 come August.

If no, and I’d gotten blown up, I sincerely hoped mom would be righteous pissed off at my brother for hiring me for this job in the first place.

Fortunately, as was the case in most of these instances, it turned out to be a prank. And a big waste of time. The officer left, and we all went back to work. A few of the patrons returned to their seats — the others left with rain-check tickets for another showing or complained loud enough to get refunds. It’s amazing how fast life returns to normal, if nothing terrible happens.

I came back to the projection booth and started up the movie where it left off…a bit more humbled by the experience, wondering if the caller was from our ever-expanding list of former employees. Still, I couldn’t help but feel a little proud of how I handled the situation. Perhaps I could impress my date with this story, I mused. All’s well that end’s well, right? That is, until the phone rang near the start of the second feature…

Isabel: “The owner is on the phone, and he’s mad. He wants to talk to you.”
Me: “Why?”
Isabel: “He wants to know why you shut down the movie and told everyone to leave the theater.”

Since a couple of my readers commented that they look forward to this chapter’s conclusion, and there never was one written, I’ll fill in what actually happened next: yes, the owner was pissed as no one got snacks while the bomb scare was occurring, go figure, so he lost money. I pointed out Isabel, along with the concessionistas, would have ran out of the theater screaming, if we hadn’t acted as we did. Plus, it obviously made sense to have been cautious, I said. He responded by saying, “Call me first, next time.” “Sure”, I quipped, “but I’m still calling the cops, next.” We left it at that.

Previous: Transitions (Part 6)
Next Up: The Movie List (Part 8)