Wonderful tribute by blogger/writer Tony Dayoub for a character actor who made quite an impression in his second career, post-Chicago law enforcement:

“He first served as a consultant in Michael Mann’s gritty crime film Thief (1981). Possibly recognizing a way to harness his dead-eyed stare, Mann cast him in a bit part as a silent but memorably stone-faced thug who faced off against lead actor James Caan’s safe-cracker Frank a couple of times before getting blown away in the film’s finale. This brief role led Farina to pursue acting professionally in Chicago’s competitive theater scene. It also began a fruitful collaboration with Mann in quite a few projects.”

He’ll always be in my thoughts, especially since he was the guy holding this piece at James Caan in the finale of THIEF: 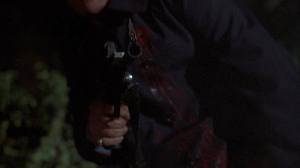 I recommend reading Tony’s tribute. May he rest in peace.