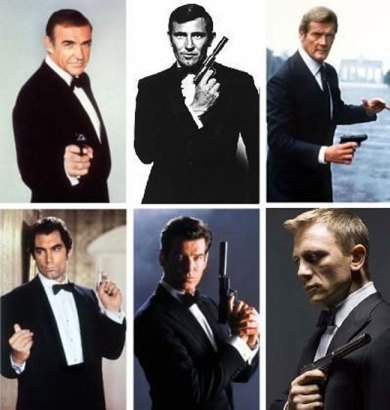 Okay, it’s now 2013 and there’s no Bond film on the immediate horizon. Argh! Perhaps, I’m merely venting my hangover from last year’s 50th anniversary celebration and the more than successful 23rd iteration in the distinguished series (24th, if you count Irvin Kershner’s contribution). Given that I covered some of my favorite aspects of the James Bond movies over the decades in a post from last year, you’d think I’d been exhaustive.

There’s all kinds of things one could list or grade in regards to these films. I am sure I’m not the first, nor certainly be the last, to bring the following some scrutiny. Of all of the six actors to have played OO7 in this movie series, each had a moment to shine in their introductions. Specifically, their initial chance at expressing this now immortal line for the camera:

So, I’m going to rank them here, purely as an arcane exercise in what I’ll call excessive Bond minutiae (eBm™, for short). What the Hell? The holidays are over, we’re all back at work or school, and it’s cold outside (except for you, Hawaii…). I decided to make it a video exercise on YouTube, at that. (yes, all rights reserved) Any excuse to play with iMovie, I guess.

You may notice this will coincidentally follow my grading of the actors who’ve played Bond, in general (with one exception). Let’s get to it then.

George and the good ship OHMsS

Yes, it’s my third highest Bond (see here), but has my least favorite utterance of the line. Lazenby’s vocalization just rings a little impudent to me. No doubt not helped by the actor’s now self-admitted mistakes during the production. He wasn’t assisted either by having to deliver the dialogue on some stage with a projected beach set in the background. Nowhere near where the stunt and scene occurred. It takes the audience right out of the movie, IMO. That, and George Lazenby (as Bond) just are not anywhere near the best. But, at least it did have the best Bond girl (Diana Rigg) and story.

Roger that… Live and Let Die

Bond as a Blaxploitation movie. Hmm… Roger Moore may have had more bites of the apple with the role, and obviously uttered those three words more than any other actor bar none, but his delivery always rang tongue-in-cheek too often for my tastes. Too casual to be a real statement for the character. Yet, at the very least here, Roger had a distinct quaint charm (with Jane Seymour as Solitaire, in particular). And his delivery served as a good counterpoint to what was being thrown his way in this sequence. It’s better than George’s take, that’s for sure, but little else.

If the producers wanted to say something about a new era of the franchise, after Roger’s oh so late departure, then this was a really ambitious start. At least for some of us fans. Timothy Dalton‘s debut had much going for it. And the filmmakers re-used the ploy of not having him utter one word of dialogue throughout the sequence till he comes to the post-action scene at the end with the girl on the boat (à la George in OHMSS). Its weakness? That girl in the boat, surprisingly. Belle Avery as Linda was too blasé and stilted — okay, the bikini notwithstanding. She comes off a bit pretentious, as well. To say nothing of, the underrated Tim cut-off too quickly on-screen with the opening titles sequence that followed. It just could have been ended better.

Pierce has a Goldeneye

Now with this, Pierce Brosnan‘s introduction, we harkened back to the classic line’s roots. Immediately familiar to long-time Bond fans, situating this sequence in a high-end casino and at a Baccarat table honored history and set the tone handsomely for the newcomer. No doubt helped by another beautiful brunette, this time Famke Janssen, sitting opposite the new Bond. Brosnan’s appeal and comfort with the character was fairly obvious, and benefitted from producers giving the actor more reign (and cheek) with his back and forth with Xenia Onatopp, one of the top-tier Bond girls and henchwomen.

Instead of stepping in as another replacement (as had been done four times previously), Daniel Craig ushered in the reboot, and overhaul, of the venerable series. In doing so, producers went back to the beginning, Ian Fleming’s first novel, as the source story-wise. Out went the threadbare template, to grand effect, especially with this début aspect. And with that, the now legendary intro didn’t arrive until the very last scene, in fact. Needless to say, Craig now as the broodier, edgier OO7, delivered the line in spades. Inasmuch as the one on the receiving end was a male (the only one in this entire set), Jesper Christensen as Mr. White, the casual menace in Craig’s recitation was more than fitting, and one worthy of a Bond villain, in truth.

No Topping Sean… Dr. No

Just because it was done here first isn’t the sole reason Sean Connery is at the head of the class. No, it’s because the scene, the actor, the whole damn thing, made for one of greatest entrances in cinematic history. Simply, it set the standard, and the rationale, for including that very line in every subsequent movie in the James Bond franchise. Connery’s tempo hasn’t been surpassed either: “Bond,” [lights his cigarette, pause a beat to snap his lighter shut, then finish with] “James Bond.” Perfect rhythm and delivery. Even the repartee with the brunette, Brit actress Eunice Gayson, became a touchstone. In actuality, she’s the forgotten key to this whole piece of dialogue. It’s the woman who set the criterion. Bond was merely responding in kind at the Baccarat table after seeking out her name. She rejoined with a more than confident bearing,

What order would you place them?