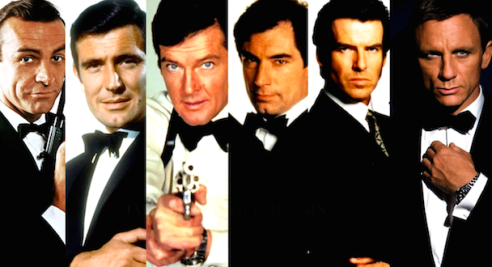 I’m like most longtime admirers of Bond, James Bond. I’ve my favorites. The venerable series has held a unique fascination of the movie buying public for over five decades now. We’re all pulling for the fictional British Secret Service agent, one licenced to kill. First created by novelist Ian Fleming in 1953 and brought to the big screen in ’62. But like any great character in thrillers, you must have a worthy antagonist to make it work.

Usually, there are exceptions, the better the villain, or henchman (er…henchwoman…oh damn it all… the heavy) the more entertaining the Bond film.

A couple years ago, I briefly touched on this with the best in villainy segment in a compilation piece on the various aspects of the longstanding movies series. Clearly, when each new actor takes the reins with this unique character, it’s a whole new era for OO7. So, purely as another arcane exercise in what I’ve come to call excessive Bond minutiae (eBm™, for short), I’ll pick such for each epoch. From Connery to Craig.

Obviously, I have nothing better to do before Thanksgiving arrives and the turkey is carved. I will be going out-of-order, too, at least at the start. So, beginning with the Bonds with the fewest, and on to the most, I’ll bracket each villain and most of their sidekicks (the important ones) for that specific slate of films. Naturally, there are spoilers to be revealed. No way around it. This then your only warning, or as Bond would say:

Might as well get the brief George Lazenby era over and done with. Not my favorite Bond characterization by a long stretch, but I still consider it the best story of the series. True but foredoomed love will do that. Even redone to an extent with 2006’s Casino Royale, but we’ll get there soon enough. Telly’s mark as Blofeld not bad, he’s always been a solid rogue when called upon. However, his predecessors were more urbane in their murderous schemes. So his more thuggish interpretation stood out. Not always in a good way, though.

Now Ilse Steppat on the other hand did far better as Blofeld’s henchwoman, Irma Bunt. Going against type compared with most of her sisterhoods this early in the Bond series, the older woman was not the beauty fans had come to expect. However, like From Russia With Love’s Rosa Klebb, she’s far deadlier. In fact, I’d say she accomplished the most surprising twist of the entire series, and got away with it.1 Believe me, the women of OHMSS is what makes the film.

Timothy Dalton, who unfortunately was treated rather unfairly in his underrated and too short stint as OO7, was somewhat shortchanged with rival bad guys, as well. Like Bond’s more politically correct bent during this run, not his fault. Hard to believe Joe Don Baker could deliver one of the lesser villains of the series (he’s more convincing as CIA officer Jack Wade in his successor’s debut), but it’s true2. Easily the more charismatically wicked was Robert Davi as the powerful Latin America drug lord in Licence to Kill.

Should be said the bad guys in Licence to Kill all had pretty gruesome comeuppance.

Still, The Living Daylights had a few things going for it. Besides Dalton, Whitaker’s (and secondary bad guy General Koskov’s) righthand man Necros topped this category. Andreas Wisniewski had that distinctly 80s European way about him in killing off those who got in the way. He’d go on to be John McLane’s first offed henchmen in Die Hard a year later, too. As entertaining as he was tall, he’s just plain better than Benicio del Toro, who hadn’t got his overacting approach quite down at this point in his young career.

12 Responses to “eBm: Best in Bond Villainy by Era Part 1”