Whether you’ve noticed or not, I’ve been on a music motif this month. Still, I haven’t entirely abandoned movies. So when song and film coalesce, I try to go out of my way to note it. In this regard, teeing up the 2009 Blu-ray to one of my favorite black comedies from the ’60s recently. Stanley Kubrick’s brilliant satire, Dr. Strangelove, Or: How I Learned to Stop Worrying and Love the Bomb. Those that appreciate both would be hard-pressed to ignore this film’s opening titles sequence.

Designed by another famed movie graphics master, Pablo Ferro, the sequence stood out for a number of distinct aspects. Being Kubrick’s last black & white film, the startling aerial cinematography of a KC-135 tanker re-fueling a B-52 Stratofortress uniquely served as the backdrop for the movie titles. Instead of doing models, the designer deployed canned military footage in the piece — good thing as the Pentagon famously vowed to not help the production given their dislike of the screenplay.

Still, the mise en scène established a barely disguised sexual overtone with the H-bomb in the era of the ’60s and the communist-hating “macho war-mongering” of the time. Missed by film censors, it remains the stuff of directorial and design legend. Next would be the actual titles themselves. They were entirely hand-drawn (contrary to title production of the period). Ferro was one of the first to employ them, and all the while as a bomber “mounted” the tanker in mid-flight. 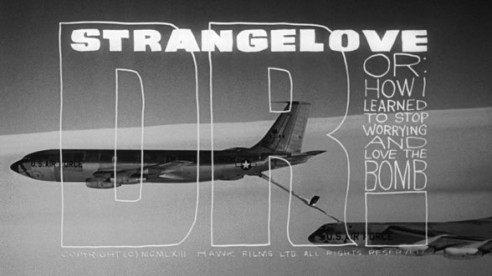 It’s still evocative. Pablo Ferro drew the titles to fit perfectly with the images flying and mating across the screen, and draw attention to both. With grease pencil on panes of glass, no less. He thought this would be transferred to real titles at a later date in the production. Kubrick on the other hand loved it. So Pablo edited those same panes along with the stock footage together.

Yet, he goofed. After release, Kubrick pointed out to the designer a typo in the titles. A missing ‘d’ in that section identifying the source novel. Watch closely to see, “Base on the Book • Red Alert • by Peter George”, that appeared.

Even so, along with those high altitude views and original graphics, the accompanying and hypnotic instrumental stood on equal footing. It metaphorically tied the segment all together. The melodic song (uncredited), Try a Little Tenderness, written in 1932 by Harry M. Woods, Reginald Connelly, and Jimmy Campbell was wonderfully and cleverly placed in the sequence.

The old love song, one covered so damn well by Otis Redding and others years later, offered another clue to the suggestive aerial ballet on display. Arranged by Laurie Johnson for the Studio Orchestra recording, the same composer who wrote the delightful theme song for the stellar ’60s British TV series, The Avengers, it’s a tune that helped set these opening titles sequence on top, so to speak. 😉

To view this sequence in a higher definition, make sure to click over to The Art of the Title folks and their clip:

Dr. Strangelove or: How I Learned to Stop Worrying and Love the Bomb (1964) — Art of the Title.