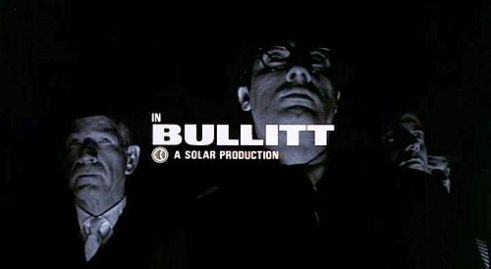 Writing Pop reviews and in-depth analyses of current and classic films from around the world, Michael Betancourt wrote what I happen to believe is the finest breakdown for one of the best opening title sequences of the ’60s. That it happened to be by one of the masters of this graphic art, Pablo Ferro, whose work highlighted in this series, shouldn’t surprise. Matters not that the article is a few years old.

“While Bullitt (1968) is better known for its extended automobile chase sequence through the streets of San Francisco, the film is also a carefully written detective story in the same mode as the 1970s TV series Columbo: it is less a mystery where the audience spends their time figuring out the puzzle than a story about how the police catch the criminals. What the narrative chronicles is the discovery of reasons – motives – for the opening montage that is simultaneously the title sequence. Every event in the film, most especially and literally in the car chase, is in pursuit of this information. This discovery is what unifies all detective stories: whether they are tracking the meandering investigation of a private investigator or following the police as they make their inquiries, they are concerned with piercing the veil of surface illusions – the lies, deceit and misinformation criminals use to hide their crimes. This fact defines the mystery genre itself and is an idea that is visualized by Pablo Ferro’s title sequence/opening montage for Bullitt (directed by Peter Yates). This beginning integrates the unveiling common to mystery stories into the design itself by fusing the opening montage with the type animation via compositing to present the on-screen credits (the title cards).”

Having seen it again at the most recent TCM Film Festival, that opening to Bullitt still entrances, even 50 years later. If you’ve seen it or not, run, don’t walk…Hell, just get into a classic Mustang GT Fastback and floor it, over to the source: Pablo Ferro’s Title Montage for Bullitt (1968): The Criminality Beneath the Surface of Civil Society – Bright Lights Film Journal

3 Responses to “Reblogged » Pablo Ferro’s Title Montage for Bullitt (1968): The Criminality Beneath the Surface of Civil Society”