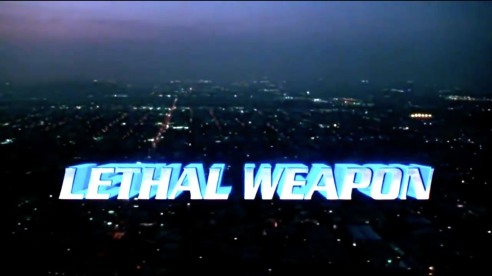 Even as the spread of COVID-19 worsens in this very cruel year of 2020, really didn’t want it to affect the holiday season. But it does, if we’re being honest. So as we buckle down the big black belt in our Santa suits, staying out of the malls and away from crowds if we have any sense remaining, we’re left to watch traditional fare in our homes. It’s what I’ve been doing. So what Christmas movie to highlight for the last opening titles and song post for this terrible twelvemonth?

Given our plight… it would have to be 1987’s Lethal Weapon.

If you doubt it, John Rieber has written convincingly why Die Hard is a Christmas movie.

What? This isn’t a yuletide flick, you say? I bet you’re a Die Hard denier, too. And director Richard Donner pulled off this action-packed, rated-R movie set around Christmas time a year before John McTiernan did with his take. While this buddy-cop-film isn’t the first1, it was one to take the brash stylings of the ’70s2 and give it an Eighties sheen. Together with upping the violence factor, it also beat John McClane to the punch with quotable, profane dialogue by Shane Black3.

Roger Murtaugh: “I don’t want to work with you!”

Roger Murtaugh: “Ain’t got no choice! Looks like we both been fucked!”

Roger Murtaugh: “God hates me. That’s what it is.”

Martin Riggs: “Hate him back; it works for me.”

Covered by Chubby Checker and Bobby Rydell, Hall & Oates, The Platters, The Beach Boys, and a whole list of others.

This brings us to the film’s emblematic opening titles sequence. An unexpectedly dark start that featured a time-honored Christmas song; making it a tuneful template for future action fare4, as a result. Plus, chronicling the instigating event that gets the mayhem rolling.

Bobby Helm’s definitive Jingle Bell Rock song5 was turning three-decades-old when audiences reheard it as the Warner Bros. logo splashed on the screen. An ebullient take of Jingle Bells that brought the old standard into the Rock ‘N Roll era and played every gift-giving season thereafter. Musically fueling and contrasting the R/Greenberg Associates-designed credits6 appearing on the black backdrop with a bygone era and the shadowy vibe of the Reagan Decade.

By the time we get to the “Lethal Weapon” title that dark background morphed into an aerial nighttime view of its snowless Los Angeles setting. As other DPs have done, Stephen Goldblatt‘s camera embarks on “… a stylish and atmospheric tone via its movie title rendering.” Capturing the viewers’ imaginations with this town’s self-illuminated cityscape before centering its sights on Long Beach’s International Tower7. Fixing our eyes to one holiday-decorated condo in particular.

It’s here where the sequence takes a dire turn, skewing the cheerful tinsel tone as Jingle Bell Rock warps off-track. Handing off to Michael Kamen‘s mournful score as the reclined, partially clothed figure takes the stage. Although the young woman in seeming euphoria, the audience begins to realize it’s drug-induced8 as she moves to the powder-strewn glass top under the Christmas lights. Upended further still when she staggers out to the balcony with its high, alluring view of the city.

The opening emphasized an unconventional take on the holiday and its titles sequence, all the while someone’s daughter grimly takes in the scenery. Weightily casting it downward as the, “Written by Shane Black”, credit appears, which takes the excerpt and the young woman in that same direction. Forcing the audience to catch its breath as she takes the panorama in one last time. The camera catching the floors as they fleetingly flash past and the ground rushes up to greet the victim.

With the possible exception of Sam Peckinpah’s Wild Bunch, I daresay it ended on one of the most startling and tragic, “Directed By…”, credits ever put to film: 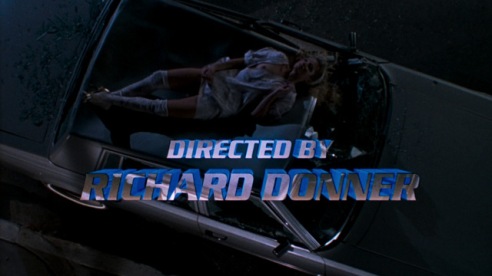 Regurgitating what I’ve said in other similar posts, “… this opening title sequence a metaphor for what’s happening to us, now.” My apologies for the gloomy tenor of the post, but what’s happening in the U.S. at this moment is affecting my outlook. Yet I do wish all a happy holiday, nonetheless. Just afraid it’s not going to be one for all, sadly enough.