While doing everything in my power to not think about junior high school, or the bible study camp my mother’s sister roped her daughter and moi into the summer of ’67, I’d marked this day. Wouldn’t realize for a many a year to come, but I did. Happened one day when that same cousin pulled out the above vinyl LP from a gloriously unexpected sleeve and started playing it on her turntable. As the stylus grooved on to its ninth number, the second song on side two, in fact.

The moment, like a tree struck by lightning falling across the road, set long ago for me to swerve into…

Granted, the “Summer of Love” stirring didn’t register much as we weren’t anywhere near San Francisco’s Haight-Ashbury district, nor ready to commune with flower children. Vietnam solely a distant drumbeat on evening news, months away from the Tet Offensive set to give everyone a harsh wake-up call. But we sure knew about the Cold War, having practiced “Duck and Cover”1 since elementary school. Like everyone our age, Pop Music used to offset anxieties: nuclear war, high school…pimples. 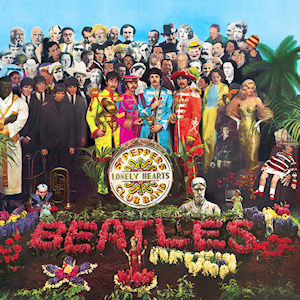 As much as the Sgt. Pepper Lonely Hearts Club Band album further refined what The Lads started with Rubber Soul and the epiphany of Revolver, its real effect was the cumulative and creative breakthrough it cemented. No going back for the four, nor the rest of us. Expectations, too, pushed permanently ever higher. Whether aghast adults wondered what limits these Brit mopheads would dance over, the revolutionary effect this LP had on their kids then, and in the years to come, quite clear.

No surprise, the triumphant introductory of the title track and every whimsical number thereafter wrapped around our impressionable pubescent minds that day. Sealed the deal. A cast that spelled out psychedelic and symphonic rock from that point forward. Moreover, introducing the harpsichord, the glockenspiel, and the Indian sitar to us whippersnappers, which set the album on another plane. The joy, sadness, and contemplation in verse2 etched the experience as only music could.

By the time we reached When I’m Sixty-Four, the gray matter had coalesced our “What’s next?” curiosity with the anticipatory energy of youth. So as George Harrison’s Indian Classical-themed Within You and Without You ended and producer George Martin set off a trio of clarinets3 in a distinct old-timey sway, my cousin and I quizzically looked at each other. The shift in style so abrupt it should have disrupted our listening — yet, given the album’s tangent, it surely did not.

Only later would we learn Paul McCartney wrote the song as a pre-Beatles teen and dug it out for the album in homage to his father turning 64 that same year. Subsequent replays enlightened Macca‘s deceptive lyrics and nostalgic bent4. Trying to convince a new girlfriend of his worthiness by painting a scenario of their later lives together. Wistful in its meaning while simultaneously hopeful in touching on their future grandkids by name. Whatever prospects all worthwhile.

Having listened to the album, and this particular song, in succeeding decades, it uncannily measured that day to this and somehow characterized it. Everything that brought joy and suffering in-between those stakes made me wonder, if the journey would ever reach the number underlined by a Liverpool 16-year-old so long ago. Essentially, all the above in preparation to this day, set whatever organic clock in my head to chime as it approached. And, as usual, way before I realised it.

Can’t help but feel lucky in the same guilty way survivors do when fate skirts passed. Having learned it leaves some untouched while taking away others. Especially those you cherish. Am fortunate the love of my life bought into the song’s quintessence almost thirty years ago, even if she’s not a Beatles fan. Her and our children in my life, at this point in time, easily the greatest birthday gift I could ever have hoped for. Particularly, as my years at long last collided with McCartney’s tune.5