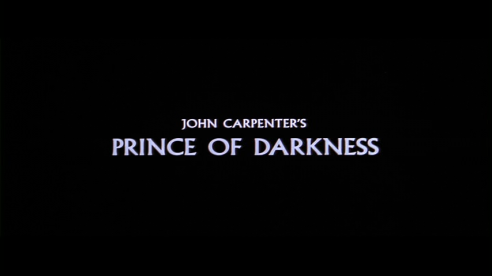 “Let’s talk about our beliefs, and what we can learn about them. We believe nature is solid, and time a constant. Matter has substance and time a direction. There is truth in flesh and the solid ground. The wind may be invisible, but it’s real. Smoke, fire, water, light – they’re different! Not as to stone or steel, but they’re tangible. And we assume time is narrow because it is as a clock – one second is one second for everyone! Cause precedes effect — fruit rots, water flows downstream. We’re born, we age, we die. The reverse NEVER happens… None of this is true! Say goodbye to classical reality, because our logic collapses on the subatomic level… into ghosts and shadows.”

In examining my viewing habits, it became clear what I assumed were my preferred among a favorite director’s output somehow isn’t what I thought. Oh, sure, John Carpenter’s Halloween from 1978 is a classic of his, but how often am I drawn back to it? Compared to his follow-up two years later, The Fog, the trip meter keeps going up for the latter while the former lags. Guess I’m pulled to his less successful productions because there’s more there than critics and viewers initially surmised.

And that goes double for a film that died a swift death in theaters in 1987, but as Carpenter himself noted “…found life, like many of his films, on video.”1 Remains annual viewing, especially round this time of year because, like the vessel housing something unfathomable in this yarn, has incubated into a darkly rich distillate. And like the swirling, cognizant luminescence within, has found the time right to free itself and trip out insightful movie-viewers minds something fierce.

Which is why I’ve chosen to look at Prince of Darkness‘ languid and decidedly underrated opening titles sequence as they’re far from straightforward, yet get us on the road to Hell soon enough.

Normally, I’d hold off till the end to speak of the music involved, but this thirty-year-old theme song2 (which beats to life even as the well-known Universal logo barely begins to spin in the sequence) is the melodic heartbeat of it all. Another of the John Carpenter-Alan Howarth collaborations, the director composing and performing the simple, but ominous keyboards he’s been so effective at, while the latter layers his studio magic upon it. Without question, one of the pair’s best movie soundtracks.

Titled simply as “Opening Titles”, the tone is set early, musically, accompanied by the foreboding sound of the wind3 even before any of the credits roll and commence a preamble that hints at the end of days4 residing alongside our day-to-day existence.

This tale of “cosmic horror” takes shape in the midst of what appears to be the mundane of two human institutions. Those in eternal opposition to the other’s existence — science and religion. A subject that has fascinated John Carpenter and central to this opening titles sequence. The prologue establishing the traditional conflicts of the “faithful” and “empirical” orders. Then undermining each, and expectations, since the biblical devil in Prince of Darkness is truly not of this world.

The old, inaugurated by the dying priest in his bed at the start, juxtaposed against the young eager USC5 grad students meandering the nearby campus. Visually conjuring the forces soon in play against what the “Brotherhood of Sleep” sect has watched over for centuries. The vibrant longing of youth, Brian (Jamison Parker) for his classmate Catherine (Lisa Blout), parlayed against the age-old belief that life is eternal, even if our stay here fleeting, personified when the nun finds the now very still padre.

And always, there’s that theme in the background, pulsing with gloom; the theme rising and falling throughout, like a malevolent unifying force gaining strength.

The entirety of the sequence pure set-up, and taking one’s time to get there, too. Eleven minutes worth — an eternity — with only the occasional white on black titles to break it up. Carpenter crafting Gary B. Kibbe‘s lenses (2.35 : 1 aspect ratio) to deliver his own widescreen German Expressionism rather than the movement and quick cuts others use in fright films. Languid, but controlled…show, don’t tell. Building a sense of dread mainly with the eye rather than purely by what the characters spout.

The crux of Carpenter’s inception are those in seeming opposition through the motif of contradiction. The adversary at the core of the story…the anti-God…denoted in ways traditional and preternatural. The Catholic compound’s sedate pastoral grounds the inverse to the decrepit church housing the antithetical savior. Donald Pleasence‘s priest asking Victor Wong‘s skeptical Physics professor for help; even Professor Birack’s discourse on our perceptions at odds with its sub-atomic components.

Scene by scene, block by block, and building toward John Carpenter’s stark screen credit long in coming. An atmospheric sequence that is both a cinematic and claustrophobic course in mounting unease and apprehension. Laid with care6 by a master craftsman of picturesque horror, culminating in Brian’s diminutive flat. The writer-director’s crescendo arriving like the depiction of a long dead supernova across his television set. Unknowingly, one already writhing with insect life, much like a corpse.

4 Responses to “Opening Titles and Song: Prince of Darkness (1987)”