This is the next entry in a Theatre… a Movie… and a Time, a series that was begun here. Though this motion picture is in-between milestone anniversaries (those of the 0 and 5 variety), it’s another I can’t help but revisit… regularly. The most recent being a Fathom Event encore to celebrate the late-Gene Wilder, one that marked his passing with this cinematic accomplishment.

“Let me out. Let me out of here. Get me the hell out of here. What’s the matter with you people? I was joking! Don’t you know a joke when you hear one? HA-HA-HA-HA. Jesus Christ, get me out of here! Open this goddamn door or I’ll kick your rotten heads in! Mommy!” 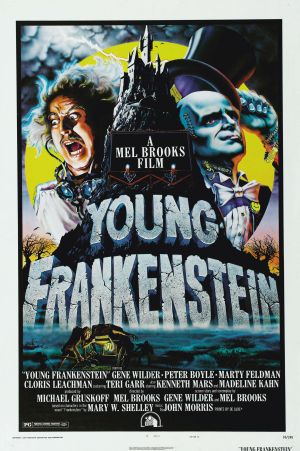 December 28, 1974: Most young men turning the big 2-0 already full of ups and downs, as one would expect in hindsight. If you live through it, that is. Happened to fall in the tumultuous times that was The Seventies, which made it doubly so. Don’t know what I could have expected, having never gone this way before. Winging it as I went along. College…girlfriend…car, along with finding and holding a paying job to help afford all three, in oil crisis and economic recession times.

Thus, failing at the first, fumbling through the relationship with the second, finally flogging in-between both by way of the third. Norm for the times, I guess. Stephen King published his first horror novel Carrie the same year, which was kind of indicative to what real life did to us. Watergate finally came to a head with Richard Nixon resigning the presidency…and Gerald Ford pardoning his crimes to top it off not too long afterward. At least we had the movies to distract us from all of this.

Said girlfriend and I took in more than few together during this annum. In fact, we saw every one of the Top 10 highest grossing films that year, save for two1, and I took in a whole lot more with other friends or by myself. More than few documented in this series, in fact. By year’s end, my first college steady and I had done disaster flicks Earthquake and The Towering Inferno, and one of the best sequels ever, The Godfather Part II. See why earning money became the priority it did.

We’d return to a few of the same movie houses to do all of this. As it happens, the small but classy venue, the Lido Theatre, once located on Pico and La Cienega but now long gone2, had hosted us and the seminal neo-noir film, Chinatown, that summer. Just after Christmas, we’d head back there for something equally special. By the same director and the above-named actor who’d had us rolling in the aisles back last February with Blazing Saddles, which seemed ever so long time ago.

Young Frankenstein appeared to have all that I’d grown to pine for — a horroresque theme which harkened back to my childhood in front of a black and white Admiral television set watching monster movies, and the humor just about all of us living in SoCal needed by then. The hits, both real and metaphorical, the 70s became known for had begun to rain down on us. Of course, this being the decade for it, my Saturday night date with my significant other had the accompanying downpour.

The entire TMT series can be found here.  If you’re interested how it’s put together, click here.

4 Responses to “TMT: “…with quiet dignity and grace.””