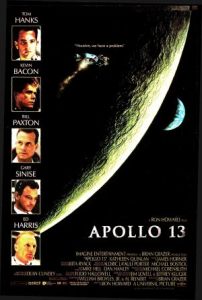 Timing is everything. I don’t think my partner, the blogger otherwise known as the Scientist Gone Wordy, in this literary and cinema review series of ours foresaw what was scheduled at this year’s TCM Classic Film Festival1. Or knew that the Hollywood event was moved up from its usual April to this month when she proposed the year’s timetable for the titles we’d examine back on January 1st.

If she did, she’s more psychic than the woman I’m married to.

Scary thought as Ron Howard’s film adaptation of the 1994 non-fiction book by astronaut Jim Lovell and Jeffrey Kluger, Lost Moon, was showcased at the festival in the famed Chinese Theatre last Friday. Wasn’t about to miss that screening since the year also marked the 20th anniversary of the film’s release in ’95. Read the source material in preparation, too.

As usual, my colleague Rachel will examine and review the historical book that tracked the perilous voyage of Apollo 13. One that enthralled the world as a result of a hidden technical failure that could have led to catastrophe in space. Its later translation into a tense and spectacular film is what I’ll evaluate. The wordy one’s book review can be found here:

A brief synopsis of the film: On April 11, 1970, at 1313 Houston time, during the post-heyday of the Apollo space program, astronauts Jim Lovell, Jack Haise, and Jack Swigert are sent on America’s fifth mission to the moon. The unlucky 13th of the program. Only fifty-five hours into the flight, after a broadcast home and a routine stirring of the tanks, disaster took place. A mysterious explosion rocked the command capsule, draining away its oxygen and power.

Commander Lovell and his crew watch in alarm as the cockpit grows darker, the air thinner, and the instruments wink out one by one. Luckily, the lunar module that was to land on the moon, undamaged but never built for what the astronauts intend, will be forced into service as their only lifeboat in the vacuum of space. What unfolds is the true story of the astronauts and NASA personnel at Houston laboring to return the spacecraft and crew safely to Earth.

NASA Director: “This could be the worst disaster NASA’s ever faced.”
Gene Kranz: “With all due respect, sir, I believe this is gonna be our finest hour.”

You get to a certain age and some things aren’t recalled as sharply. The good and the bad. Then there are those that still are because they were shared collectively. Remain vivid, in fact. My entire generation was raised as youngsters during the inception of the space program. Captivated by its step-by-careful-step progressions and successes, marked by infrequent, and for the most part, unseen failures. Made 13’s almost as momentous as that first walk on the moon.

Distinctly remember when it was announced that the precarious mission of Apollo 13 was to be chronicled on film. Instantly excited was I…then, worried. Could filmmakers do the real-life misadventure of its fraught voyage home any justice, I wondered. Director Ron Howard’s work I’d enjoyed (Splash, Cocoon, Night Shift), now tempered with later productions like Willow, Backdraft, Far and Away I found less so. I needn’t have worried, though.

Often compared to The Right Stuff (reviewed last year) with its historical significance and succession from the early Mercury program, it’d be a natural for a TCM movie double-bill. Those who’ve seen Philip Kaufman’s ’83 epic will spot director Ron Howard pretty much attempted to model most of Apollo 13 around that film — Gus Grissom’s ill-fated pre-launch test for the Apollo 1 mission his film’s blunt lead-in. Just as Lovell and Kluger expounded in their book.

Even so, the two films (like their sources) share little else beyond that, outwardly. Tom Wolfe’s telling The Right Stuff, which director Kaufman translated so well to cinema, was for the most part a poetically Earth-bound one. The thoroughness and technical precision of Howard’s adaptation places it more toward the thriller category with its shorter span…sans gravity. Another reason this film splashed down in the midst of the summer blockbuster season, I think.

No doubt, the irony and parallels for those of us who saw John Sturges’ Marooned (1969) a mere four months before Lovell’s final Saturn 5 liftoff, obviously was not lost on Universal Studio executives twenty-five years later. Apollo 13‘s tale filled with extraordinary suspense and misfortune to fuel such a cinematic effort. Perchance, ample enough to have those same execs to contemplate how they’d tie the real event to some inane sequel. Apollo 18 anyone?

“We’ve never lost an American in space, we’re sure as hell not gonna lose one on my watch! Failure is not an option.”

Its film adaptation proved an immediate commercial success upon release. Clearly, filmmakers combined elements most go to the movies for — drama, comedy, suspense, thrills, and tug of the heart. After reading “Lost Moon” I’ve come to appreciate the William Broyles Jr. and Al Reinert screenplay the more. Given the archival detail Lovell and Kluger documented, getting a good portion of it into a 140-minute movie was its own remarkable feat.

“All right, we’re not doing this, gentlemen. We are *not* going to do this. We’re not going to go bouncing off the walls for ten minutes, ’cause we’re just going to end up back here with the same problems! Try to figure out how to stay alive!”

Of course, this being Hollywood, some facets had to change. Given the central theme of the 2015 TCM Classic Film Festival was “History According to Hollywood”, Apollo 13 (among others) proved “…endless inspiration in re-creating historical moments and bringing to life the heroes and villains of the past…” Though, “…not always true to the historical record…” The histrionic aspects involving both Mattingly and Swigert taking most of the artistic license here.

Once again, it doesn’t really matter.

Yes, yes. I’ve become somewhat jaundice toward the splurge of overly CGI’d film in the years since.

What Ron Howard and Imagine Entertainment co-founder Brian Grazer crafted simply works. As a popular movie, and in capturing a heroic moment of our storied past on celluloid. Granted, in twenty years some of its special effects, the models and computers of Rob Legato’s Digital Domain Inc., can be spotted. Even though a splendid restoration premiered at this year’s fest. Their fine contribution fulfilled the promise of any contemporary blockbuster, I must say.

The mission launch sequence even now thrills this jaded moviegoer to tears as it first did long ago. Says something of how well the film still connects with its audience, even if many of them were not yet born when the Odyssey lost power in-between Earth and its moon. The standing ovation those of us in the TCL Chinese Theatre gave that night for the spry 87-year-old Jim Lovell, introduced by Alex Trebeck (with surprise guest Bill Paxton), a testament to that.

Watching this for the umpteenth time, noting a number of details and references from the book skillfully pieced together, scattered throughout the final product, still gave pause. The film has become even more evocative for those of us who’ve followed our country’s space program from its genesis to today. For we have lost gallant crews in the years after April 1970. The Space Shuttle Challenger on its ascent, and Columbia on the tragic descent2.

Apollo 13, like its real-life counterparts, an extraordinary entity translated to the screen. Whether a viewer catches it at home, or better yet, in a glorious theater. The ensemble cast of well-known names (Tom Hanks, Ed Harris, Kevin Bacon, The Pax Man, Kathleen Quinlan, Gary Sinise) and character actors (among them Clint Howard making another appearance in a brother Ron production), pulling together and engineering like Hell to bring it all home3.

Lastly but most assuredly, Hans Zimmer’s stirring score befitted the history screened. Especially when the haunting trumpet solo of the main theme, beautifully evoked by Tim Morrison, marked time. Added a euphonic weight across the ancient monitors, gauges, and slide rules of those figuring out a way to cheat death once more in humankind’s reach for the stars. Just another of the film’s noble aspects bestowed on viewers.

A sample of the warmth played out against all that cold nothingness as a prodigious problem was solved.

Reporter: “Apollo 13 – lifting off at 1300 hours and 13 minutes, and, entering the moon’s gravity on April 13th.”
Jim Lovell: “Uh, Ken Mattingly has been doing some… scientific experiments regarding that very phenomenon, haven’t you?”
Ken Mattingly: “Well, uh, yes, well I uh, had a black cat walk over a broken mirror under the lunar module ladder, didn’t seem to be a problem.”