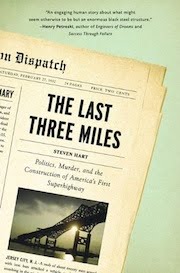 To say the least, writer and journalist Steven Hart has a way with words. A good example of that is how he used them for the bio on his personal website:

“I was abandoned as an infant and raised by wolves in the New Jersey countryside, taking shelter by day in the undergrowth of highway medians and traffic ramps. A kindly farmer found me in one of his snares and brought me back to his house, where he taught me to read, speak and write my name with a firm but crooked hand. After that, there was nothing to do but send me to Rutgers University, where despite my best efforts I graduated with a degree in English. I live with my family midst amber waves of condos and shopping malls, enjoying a quiet life, except on moonlit nights when my four-legged brothers and I range the countryside in search of prey.”

I’ve read his blog for some time now. To say his posts are interesting or have a point of view, wouldn’t give them proper credit. Whether he and I are on the same wavelength for the various subjects he chooses to write about is peripheral. We definitely have a difference of opinion regarding where the album Abbey Road sits on Beatles’ history, but that’s besides the point. And, it’s that perspective, and his wordsmithing, that I keeps me coming back for more.

Hey, I’m honored he has me on the blogroll — plus, all of this finally got me to read his book.

I flit around a number of authors and genres in my audiobook/book readings, it’s in my nature. But, I do have a fine appreciation of history, which dominates my non-fiction selections. Steven’s The Last Three Miles: Politics, Murder, and the Construction of America’s First Superhighway turned out to be something exceptional. It details the impact (on all of us, in fact) of the building of the Pulaski Skyway in the state of New Jersey.

How it came to be, in one of the most congested areas of the country, and how the politics of business, labor, and city hall (and one formidable mayor, Frank Hague) shaped it (and the automobile mess we’re in) are told through the insightful prism that is Mr. Hart’s narrative skill. The book had me enthralled from beginning to end.

Being the audiobook aficionado, I was pleasantly surprised when I learned it was available on audiobook. Dion Graham narrated the piece in equally extraordinary fashion (no surprise as Mr. Graham has driven those “highways and byways many times…” when he was a resident of the N.J.). He proved to be a superb choice for this reading, IMO. I’d recommend either the book or audiobook to any of my friends who enjoy history, crime, politics, and the oxymoronic term of “Rush Hour.”

Even though I’ve only spent a total of two hours in the state of New Jersey (on a layover at Newark Liberty International Airport), I feel like I experienced a good deal more there after The Last Three Miles. Perhaps, I’ll make it back someday — maybe even to Steven Hart’s indy book store, Nighthawk Books. If so, thanks for the road trip, Steven.

This a reprise of a short book review I wrote back in 2010. Now dedicated to author Steven Hart, a good friend who recently passed away to the shock of many. May he rest in peace.