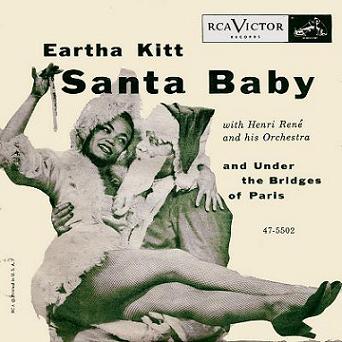 I know this song is covered by the likes of Taylor Swift, Madonna, The Pussycat Dolls, etc. But, no one in my mind will ever do it better than the original, Eartha Kitt. Since it was six years ago today that she passed on, I thought it appropriate to wish everyone a very Merry Christmas with a musical remembrance (via one of the all-time best holiday songs) of this singer, actress, stage and cabaret star.

“”Santa Baby” was originally recorded by Eartha Kitt with Henri René and his orchestra in New York City on October 6, 1953. It was released by RCA Victor Records as catalog number 20-5502 (in the USA), and by EMI on the His Master’s Voice label as catalog number B 10728. The song was a huge hit for Kitt, and she later said that it was one of her favorite songs to record; she reprised it in the 1954 film New Faces. Kitt also reprised the original song in a 1963 re-recording for Kapp Records, with a more uptempo arrangement. (Madonna’s popular rendition for the 1987 charity album A Very Special Christmas is based on this latter version.) In 1954, Eartha Kitt recorded a new version of the song with new lyrics titled “This Year’s Santa Baby”, to no commercial success. Writers listed did not change. The song was featured in the 1989 film Driving Miss Daisy.”