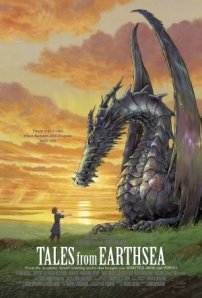 Here we go, again. Another September 30th. Ever since I became a parent, approaching 19 years, now (that’s 133 in dog years), I’ve become acutely aware of this date. The eve of what I like to refer as The Slide. That is, the cosmic phenomenon of the beginning of the end for whatever year you or I happen to be living through. You know, the one where the space-time continuum accelerates to the point that the year is suddenly over. All of those things that happen between now and the end of the Rose Parade just a blur. A fleeting memory.

So, the blogger otherwise known as the Scientist Gone Wordy and I return to do the penultimate duo post book slash movie review of the year as we start our short autumnal run. In this case, per a submission by my partner, returning to another work by fantasy/sci-fi author Ursula K. Le Guin. The 2014 Medal for Distinguished Contribution to American Letters winner. Her coming home to the magic-drenched world of Earthsea with a collection of fantasy tales in the land she first imagined in 1968. I assumed the wordy one will peruse her 2001 novel, which served as the basis for its 2006 adaptation by Japanese filmmaker, and landscaper, Gorō Miyazaki. But what do I know. Rachel’s book review can be found here:

(Mostly) A Wizard of Earthsea by Ursula K. Le Guin

A brief synopsis of the film: Bizarre events are rippling through the kingdom of Enlad. The King, already hearing tales of drought and pestilence in the land, as well as the news of people going insane, receives word of a strange omen. Dragons appearing and fighting out at sea. Along with the disappearance of his son, Prince Arren, it’s troubling. Shortly, the ruler is struck down in a dark corridor of the castle, and his sword taken, by his teen son. Thus, the wandering wizard Archmage Sparrowhawk begins investigating the cause. During his journey, he meets the distraught Prince Arren. While he may look like a shy adolescent, Arren has a severe dark side, which grants him strength, hatred, and ruthlessness. The wizard’s counterpart, Lord Cob, sees an opportunity to finally vanquish his enemy the Archmage by using the boy’s “fears” against the very one who would help him.

“No man nor any living thing in this world preserves their life forever. But only to men is it given to know that we must die, and that is a precious gift. This life that is both our torment and our treasure was never meant to endure for eternity. Life is a wave on the sea. Would you force the sea to grow still to save one wave? To save yourself?”

This will not only be the most recent film in our series for the year, but also a title I’ve not heard of nor seen before. I was pleasantly surprised to learn this was another effort from the famed Japanese animation company of Studio Ghibli, Inc. Spent many an hour watching their anime shorts and film over the years, which my kids have taken further than I. The same studio that shocked its fans on August 3, 2014 by announcing it was temporarily halting production following the retirement of director Hayao Miyazaki. Fitting, it seems.

Tales from Earthsea as a film was an interesting amalgam of ideas, styles of animation, and thought-provoking fantasy. No one can argue either Ursula K. Le Guin nor Haya Miyazaki don’t know how to entertain and enthrall their readers and viewers. There’s certainly many aspects to contemplate with this international effort. Although, it might lead to some head-scratching from that same set of groups as a result. They won’t be bored, though. Just a little confused, like this moviegoer.

My wife and kids joined in with me and used this as our Saturday night family movie event. We were amazed as we watched and enjoyed the stunning animation Studio Ghibli is known for with our introduction to the Earthsea kingdom in this sitting. The amount of blood — spilt and an appendage sliced off — was unforeseen. Of course, now that my kids have seen enough anime swordplay in their young viewing lives, they expect it going in. A bit surprising for my wife (more of her reaction later), though. But, at least she didn’t leave the room.

Tales from Earthsea a joint venture with Disney, and the first to be awarded a PG-13 rating care of the overly protective folks at the MPAA.

“You must face it, Cob. Everyone fears their own mortality.” 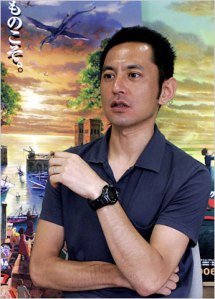 Still, the animation and score, done majestically by Tamiya Terashima, were the primary draws of the evening. Haya’s work speaks for itself. Even if it was his son, Gorō Miyazaki, who took on the effort in his first directorial stint after his father convinced Ms. Le Guin to allow him to adapt a story from the mid-series collection. I learned afterwards she (and likely some of her fans) was not thrilled with the result. Even Hayao was dissatisfied with the decision, thinking Gorō lacked the necessary experience.

Still, after watching this film I enjoyed the overall feel and look of the fantasy production, though it left me a bit mystified.

Perhaps, not having read any of Le Guin’s Earthsea stories put me at odds in understanding what was going on in this fantasy world, no matter how dazzled with the animation-candy I’m hooked on. More digging provided news the senior Miyazaki incorporated some of his own graphic novel, The Journey of Shauna, into the adaptation. Which might be at the heart of the foreign criticism this release received1. It’s a difficult edge one has to balance in crossing realms, real or imagined, I’d reckon. Cultures, too. Japanese filmmakers fashioning an American’s fantasy tale for their audience.

Let alone rendering it to the author’s readers, with subtitles and/or the inevitable English dubbing, in an attempt to sell it all back to American movie-viewers.

We could only get our hands on the dubbed version for this review’s screening. Funny what and who you pick up when watching such a thing. I immediately recognized Bond #4, Timothy Dalton, as the voice of Gandalf, err…Sparrowhawk. My son identified Mariska Hargitay as Tenar, a woman who is Sparrowhawk’s old friend. I figured his being hooked on Law and Order Special Victims Unit by his mother (of all people) the reason. 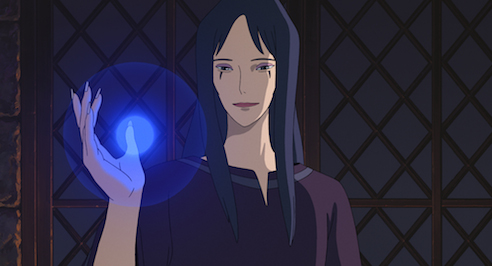 Although, my wife got the most attention of the evening when she quipped, “I didn’t know Michael Jackson was in this.”, on first laying eyes on Lord Cob. Voiced by Willem Dafoe in a very controlled performance I wished he’d given to his The Langoliers audiobook narration a few years back. But hey, that’s just me.

Ironically, it that 2004 film that prevented Haya Miyazaki from directing this production.

My initial criticisms aside, Tales from Earthsea is still a visual masterwork. Especially whenever a dragon comes onto the screen. Thoroughly enjoyable to behold from that aspect, which made me wish for more. As others have mentioned, the film does not compare as favorably to something say like Howl’s Moving Castle, including its dubbed version. Another story drastically altered from its own source material, but a translation (which I took my children to some years ago) that still managed to stand on its own as a story.

“Thank you, Therru. I’m returning to Enlad to answer for what I did, so I can finally face myself.”

So, would I recommend this to others, you ask? Ultimately, yes and no. In the affirmative for those fans of Miyazaki and Studio Ghibli. No, for those who’ll be left to wonder the motives or background of Arren (or who exactly is this Matt Leven voicing him), and others. Or why Therru (Blaire Restaneo in the English Dub) comes out so late from her guise, and/or what’s the point of that damn song she sings?!? As my wife exclaimed when the film’s end credits rolled, and the kids and I looked confusingly at each other, “It all went downhill once they killed off Michael Jackson.”