Continuing my summer of 2014 series, which was begun right here and chronicled my history with said device, examining the music that ended up on my iPod byway of the films that featured it on their soundtracks. An inventory, as it were, and one I continue to add to. Especially since I press on with my movies-watching and music-listening.

Since this category was the largest, I’ll group them by the decade that brought them forth. Again from fewest to most. The surprising decade with the second most is up next1.

Let me add since we share similar music taste, and she’s been a loyal supporter of this site and summer series, Ruth’s recent Music Break – TRON: Legacy score by Daft Punk over at Flixchatter is a natural fit. One worth taking in, and placing on my iPod 🙂

A definition for what’s being discussed…don’t worry, there’s only one post left in this series. 😉

The Magnificent Seven (1960): Elmer Bernstein’s theme from The Magnificent Seven, like that of the Moross’ The Big Country, is a classic of the genre. Mixing string with horn in a heroic, awe-inspiring orchestration it’s one that only a few can match.

Breakfast at Tiffany’s [Moon River] (1961): As a long-time Audrey Hepburn fan, as well the great Henry Mancini, how could I not include this? With lyrics by Johnny Mercer, the Oscar-winning song is simply resplendent.

Lawrence of Arabia (1962): The other classic theme from the definitive epic that remains Lawrence of Arabia, by Maurice Jarre. Sweeping in scope, it matches its source and puts me right back in the movie whenever I listen to it.

Experiment in Terror (1962): One of the darker instrumentals ever written, in my opinion. Henry Mancini’s unique and moody theme piece fell into a distinct place on film. Utilizing the unusual instrument of the autoharp to augment the plucked strings, it kept a patient, pulsing beat that was more than compelling.

The Great Escape (1963): Easily, one of greatest instrumentals of all time, it’s another of Elmer Bernstein’s stirring themes. Not very long, it nonetheless remains a rousing piece. Beyond measure for fans of the film and the history behind it.

The Pink Panther (1963): The decade was one Henry Mancini blossomed as a film composer, and the number performed onscreen. Especially those with the delightfully jazzy, playful edge like this one.

Charade (1963): The other Henry Mancini theme that rocks my world is this one. The perfect theme instrumental, really, for “the best movie that Hitchcock never made.” The quintessential piece to accompany the mesmerizing Maurice Binder opening title sequence.

A Hard’s Day’s Night (1964): “Again, how can I not pick the title track?!? Not only did that triumphant strum of a guitar, bass, and grand piano herald the opening of the song, but also the album, a movie of the same name, and a Pop era.” See why here.

Help! (1965): The ‘other’ lead title song from The Beatles sophomore film with Richard Lester. It’s more than worthy as a theme song and a successive pop hit, at that. More magic from The Lads.

Ferry Cross the Mersey (1965): Every studio and record label known tries to copy success. In the wake of the phenomena that was ‘A Hard Day’s Day’, this likely was the best at the attempt. And Gerry and The Pacemakers’ title track the best song, and theme song, of the entire movie.

The Great Race (1965): Really one of the underrated soundtracks of the decade, I think. Another splendid, playful score for the great Henry Mancini to hang his hat on. The theme a throwback to the time period of the film. A wonderful recreation by the composer.

The Sound of Music (1965): I don’t care what anyone says. The Richard Rogers theme song, like the Robert Wise film, will always have me as a fan. You hear that, family? 😉

The Good, The Bad, and The Ugly (1966): Composed by Ennio Morricone once more, with Bruno Nicolai conducting the orchestra for the soundtrack, this remains the one theme song on my iPod with two versions. I hold Hugo Montenegro’s cover, which was a 1968 pop hit in both the U.S. and the U.K., in equal regard. 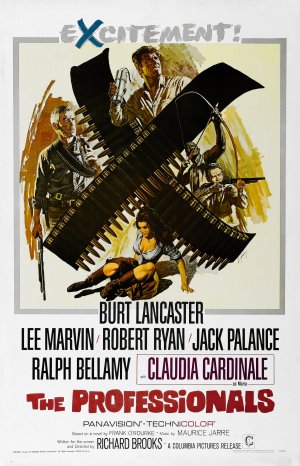 The Professionals (1966): Maurice Jarre’s amazing score and theme song had me from the very start to one of the truly underrated westerns. It matched Richard Brooks’ film’s storyline uncertainty, but in keeping with the culture it so admired.

To Sir With Love (1967): Want to know where my love of the Scottish singer, actress Lulu came from? Right here. Written by Don Black and Mark London as the theme song for the movie, it’d reach #1 in the U.S. — though it wouldn’t even chart near as high in the UK, the sods ;-).

Bullitt (1968): The Argentine composer, pianist and conductor Lalo Schifrin would match Steve McQueen’s cool and Peter Yates stellar direction of Bullitt with this theme instrumental. One of the great jazz theme songs of the era.

Where Eagles Dare (1968): God, I love the build-up of this Ron Goodwin theme, especially when the horns kick in. The grandness of the orchestra when it enters, too. Much like that Junker JU-52, when it barrels onto the screen during the opening credits sequence. Had to admit, this decade had its share of some great ones.

How about you? Any theme music from this period you’ve collected because of a movie?