Greetings all and sundry;

Alternately enduring and enjoying a sudden increase in temperature and humidity.  I’ve taken to the back yard and clearing long forgotten corners of the house. Between bouts of mental gymnastics regarding a favored time, place and genre and late evening straightening. Delving into the 1970s. And its profusion of dramas, thrillers, Noirs, Neo Noirs and some science fiction films that were pleasing to the eye while not insulting the intelligence. 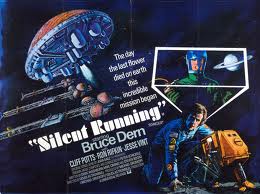 To a neat, compact little marvel that deals with the ecology. And its saving decades before it became vogue. Weighing in at just under ninety minutes and featuring the cleverness, subtle humor and skill of master model and special effects, Douglas Trumbull. Backed up by a deftly written script by Michael Cimino and Steven Bochco. And lateraled to a small cast of then, proving themselves talented. Bruce Dern, Cliff Potts, Ron Rifkin and Jesse Vint.

The very abbreviated, kind of distant future frat boy/government employee, slovenly lifestyle crew aboard the transport ship,Valley Forge. One of three enormous spaceships. Parked at the far end of the known planets circling the Sun. And containing the Earth’s last trees, flora, animals and birds inside several huge geodesic domes in: 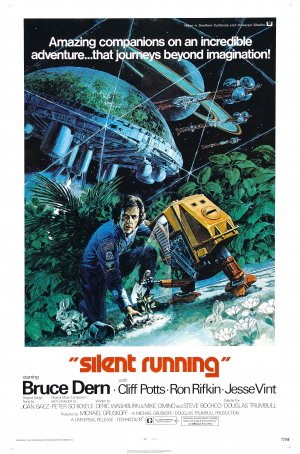 The premise and plot is a popular one for the films of the 70s and beyond. Yet, few films have envisioned it so well. The Earth’s resources have been used up. And the government in busy trying to turn back the clock. Or find new planets to populate or terraform. Leaving Freeman Lowell (Bruce Dern), A fairly gifted  electronics technician. John Keenan (Cliff Potts), Marty Baker (Ron Rifkin) and Andy Wolf (Jesse Vint) to find new ways to fight boredom between time inside the ship’s six domes tending to Mother Nature.

It is during this time that Lowell finds his inner deeply hidden Tree Hugger. And enjoys being Master of his Domain. Usually working alone. Trimming branches. Damming streams. Taking a moment to have an Eagle light on his outstretched arm. All wonderful to watch as Keenan, Baker and Wolf have go-cart races deep in the bowels of the ship.

Biding time. Almost patiently awaiting the word from Earth. To relocate to a new datum and co-ordinates and await a pioneer re-population fleet. Or hang a U-turn and return, post-haste. Lowell doesn’t mind being the eldest and outcast. His character wouldn’t work if he were a joiner. Perhaps oblivious or not to the disdain and comments sent his way. Content to do his thing until the message arrives from Earth.

Though it isn’t the message Lowell fervently desires. The Valley Forge and its sister ships are to jettison and destroy with enclosed nuclear warheads their forestry dome and return home for commercial service. The crew is more than ready to pull up stakes. Except for Lowell, who feels betrayal. And goes about his quickly laid out scheme to save at least a few of the ship’s domes and move to far side of Saturn.

Fellow crewman begin to drop. Jesse Vint’s Andy Wolf is the first. Through accidentally interrupting Lowell’s delaying tactics. Followed more sneakily and stealthily by Keenan and Baker. who happen to be inside domes slated for ejection and destruction. Leaving Lowell with two domes unscathed. And the ship’s three small robots, quickly named Huey, Dewey and Louie for company.

Setting a course and plunging through Saturn’s rings in ways more spectacular and memorable than first envisioned by Mr. Kubrick in his, 2001: A Space Odyssey. The ship rumbles, rattles and roars through collective dormant meteors and assorted orbiting planetary debris. Taking damage minor and large. Lowell sends out the robots to make repairs in the solar winds. The ship’s large dish antenna takes damage and Louie is swept away while trying to realign it.

Finally, on the far side of Saturn’s rings and quite by themselves. Lowell returns to the domes and accidentally from a scaffold and breaks a leg. Which gives Lowell the time to program the remaining two robots to reset the leg under local anesthetic. And more time to program them to play poker as Lowell recovers.

Life improves slowly. Until Lowell begins to see his domed Edens dying due to lack of sunlight. And a message is bounced off sister transport, Beaufort. Letting Lowell that his ship will be boarded within hours. Giving him times to set up large numbers of arc and other lights in the healthier dome. And orders for Dewey to take care of the forest.

Huge kudos to visual magician Douglas Trumbull for having the initiative, vision and wherewithal to assemble a better than decent cadre of writers, cinematographers, special and visual effects talent to take an Alvin Toffler, “Future Shock” concept. And allow his underlings the opportunity to collectively exceed their grasps.

High marks also for deciding to make the central set of the story the wide and dimly lit hangar deck of a mothballed Korean War era aircraft carrier. Then allow the set director, Frank Lombardo and assigned dressers to close off areas and save time and money in plying their craft.

Then hand it over to the absolute master of distraught personalities, Bruce Dern to embody someone who is slightly less driven than his character in Black Sunday while possessing about a third of the paranoia displayed in Coming Home. Basically, a man with a dream. And the ability to make it happen. For a while. 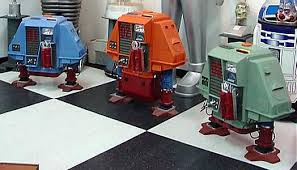 Model work is second to none. Ideas courtesy of Mr. Trumbull. And good enough to be “borrowed’ for several brief “space convoy” scenes in ABC’s Battlestar Galactica. While design of the three robot drones goes to past master, Donald Trumbull.

Cinematography by Charles F. Wheeler highlight the cramped, originally white and sterile surroundings infected by a sloppy, lived in look seen in John Carpenter’s Dark Star. Offset by long and padded corridors. Expansive, shadowy go-cart playgrounds and the opulence of the trees and scenery inside the ship’s domes. 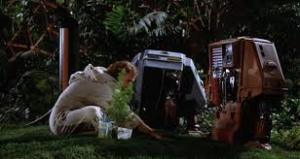 Charles T. Knight and his Sound and Re-mix Department come into their own through the rings of Saturn. Supporting a Special and Visual Effects crew including a young John Dykstra and technicians too numerous to mention.

Creating an oddly, sadly forgotten gem that is much more than the sum of its parts.

Agree? Disagree?… The Floor Is Open For Comments.