A number of actors through the decades have made the successful progression from in front of the camera to behind it. Charles Chaplin, Clint Eastwood, Woody Allen, to name only a few. Some, though, have failed, or gotten off to rocky starts — Ryan Gosling being the latest. History may turn around the verdict. Charles Laughton’s Night of the Hunter surely proved that after its initial critical and box office failure.

Others, like myself, continue to champion Robert Culp’s lone neo-noir debut, Hickey & Boggs, which has risen steadily in reappraisal over the years.

Still, many landed somewhere in-between. Neither building a longstanding career at the helm, or a career-stopping one-time in the director’s chair. The versatile Dick Powell being one. Few ever fit the adjective better. Singer, actor, even Debbie Reynolds’ dance partner onscreen. Producer, studio head, and film director. He’d direct only a handful of motion picture features. His continued good work brought better and better assignments.

Only one stinker among those five of his, and sadly that production may have led to his, and others, early death.

As this is the Memorial Day holiday, I’ve made a habit of watching war films in remembrance of the men and women who died serving this country. Two of Powell’s were such, and very good films as a matter of fact. Since my colleague Kevin highlighted one last year in a guest post, The Hunters (1958), I’ll promote his first that preceded it. The supremely underrated, The Enemy Below (1957).

“On the freighter we were men against the sea. Here, we men against men. Like every other civilian in the war, I had to learn a new way of thinking.”

Synopsis: During World War II, an American destroyer escort, the USS Haynes, detects a radar contact in the south Atlantic ocean. Thinking it may be a German U-boat, the newly transferred Captain Murrell follows and plots an attack on the suspected enemy below. A sub on path with a German merchant raider in the vicinity to collect a captured code book, and return home. When the one-on-one battle begins, Murrell, the former merchant marine, is a surprising match for the seasoned U-boat Kapitän von Stolberg. The prolonged battle will prove to be one of vessels, weapons, and ultimately wits. Testing both leaders and crews to their utmost.

The German (Prussian) general and military theorist, Carl von Clausewitz, famously suggested that war is “…the continuation of policy by other means.” War is fought by men, and women, through such means. While war movies display these conflicts grandly and spectacularly on film, the better ones center beyond such depictions. The actual drama, the interaction between those of each side, the prime aspect of their story.

The Enemy Below balanced the two, and quite well.

Submarines usually are great vessels for tension on film. Just about everything outside of the boat is trying to kill those within. Other submarines (The Hunt for Red October, Crimson Tide), sub-hunters (Run Silent Run Deep, Das Boot, U-571), the sea (Gray Lady Down) or the boat itself (K-19: The Widowmaker). It’s also true, though rarer, for their Destroyer opponent in films. The Bedford Incident comes to mind, and certainly this.

“Captain Murrell oughtn’t to be here at all. He’s as weak as a kitten. A man that gets his ship torpedoed and spends 25 days on a raft in the North Atlantic oughtn’t to have to hit the ball again with only a few days in the hospital. I guess there aren’t enough commanding officers to go around. Well, at least they gave him an easy ship.”

Based on the novel by Commander D.A. Rayner, the film adaptation by screenwriter Wendell Mayes focused on an extraordinary story. A duel between said U.S. destroyer and a German submarine. The advantage usually laying with the latter, a crew member making it clear they send three destroyers in the north to hunt just one sub. The whole a fascinating study of WWII anti-submarine warfare, and the men pitted against each other.

Performed mostly through the eyes and minds of the commanders seeking to sink the other.

A sense of genuine realism and keen attention to detail marked this effort. The scenes topside took advantage of some dazzling seascape photography. As well as Powell coming into his own with balancing its spectacular action, award-winning effects for the day, and splendid acting. Robert Mitchum and Curt Jürgens remarkably pulling off both ruthless and compassionate roles on opposing sides of battle.

Other films have noted, Das Boot in particular, the German U-boat navy  “…was one of the least pro-Nazi branches of the German armed forces.”, as historian Michael Gannon maintained [Wikipedia]. Jürgens’ captain makes a similar statement by the simple act of draping a towel over the “Fuhrer Befiehl Wir Folgen” painted slogan done by one fascist-ardent crew member onboard.

“I’ve been in the U-boats too long. […] Never think, Heine. Be a good warrior and never think. You pay penalty for thinking. You cannot rest.”

Both the heroic and anti-war message of The Enemy Below may seem antithetical, but this was also the 50s. Well into The Cold War by now, U.S. filmmakers did not paint the Germans, our new ally against the Soviets, as the typical jack-booted thugs of yesteryear. Scourges to be wiped from the Earth. No longer in that day and age. The tale lent itself to a far larger conveyance and message.

“There’s no end to misery and destruction. Cut the head off the snake, and it grows another one. You cut that one off, you find another. You can’t kill it because its something we grow in ourselves. You can call it the enemy, if you want to, it’s part of us. We’re all men.”

As someone who first saw it on TV as a kid, this really was one of the better and eye-catching war films. No doubt helped by the Defense Department, as seen with the military hardware and impressive ordnance and explosions on display underwater. All shown pretty dramatically via Harold Rosson‘s wide-ranging CinemaScope lenses, and Walter Rossi‘s award-winning special effects.

Though some have criticized the sanitized, overly spacious, and less than gritty depiction of life on-board a German U-boat, The Enemy Below provided a marvelous, tension-filled film of wartime. Done without the jingoistic drumbeat that marked the previous decade’s efforts. Filmmakers this time aimed to be more hopeful, rather than merely rousing and flag-waving.

One of the great lines of dialogue in the film was uttered by David Hedison. His “Snap it up, sir. I’m double-parked downstairs.”, just perfect for the moment.

Filled with excellent performances all around, the supporting players given small but meaningful moments throughout. Theodore Bikel as Heine, the Executive Officer of the submarine, David Hedison his counterpart on the destroyer, and Russell Collins’ ship’s doctor discharged fine efforts. Heck, even good ol’ Doug McClure of TV western fame got to shine a bit.

“A painted ship on a painted ocean. I was reminded of the ancient mariner. It rather fits us right now. Something unreal about us waiting out here in a deserted sea.”

While not the first film to show us both the perspective of the hunter and the hunted, The Enemy Below did treat its audience to a tale where the roles could be instantly reversed. Plus, manifest an antagonist, even during war of unforgiving conditions, regardless of side, in a sympathetic light. Even empathy by the end.

Influential, too. I’ve no doubt whatsoever screenwriter John Milius was inspired by this very same film. The scene where the U-boat captain puts a record on the ship’s turntable, which gets props from this vinyl-lover, to lift his crew during the worst of the depth-charge bombardment, could well be the inspiration for similar in The Hunt for Red October. The sequence where the Russian sub crew sing their national anthem.

“I have no idea what he is, what he thinks. I don’t want to know the man I’m… trying to destroy.” 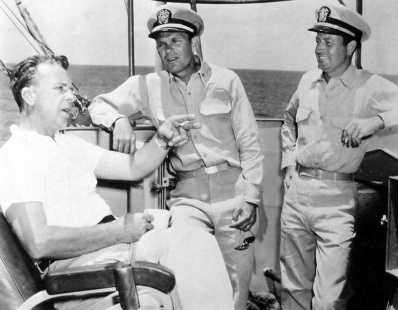 Dick Powell’s fourth film remains a classic war movie that too often gets short-shrift in these days of dazzling effects and body counts (cough…Battleship), but shouldn’t. Unfairly, we’ll never know what the actor-turned-director could have brought audiences with more efforts behind the camera. Perhaps, it’s not a masterpiece, yet I’d say it was a truly cinematic and compelling drama of conflict at sea. One which Kapitän von Stolberg would have noted, did not take the “…human out of war.”

17 Responses to “Sky Above – The Enemy Below”