This is the next entry in a Theatre… a Movie… and a Time, a series begun here.

“Just when I thought I was out…they pull me back in.”

Sorry, couldn’t help myself. It’s that way with this TMT series. Thinking I’m done with it all, then something in the ether culls a memory for it. This time, British director Neil Marshall, a favorite of late, the impetus. Recently speaking of a seminal 80s film, for the both of us, over at Trailers From Hell: 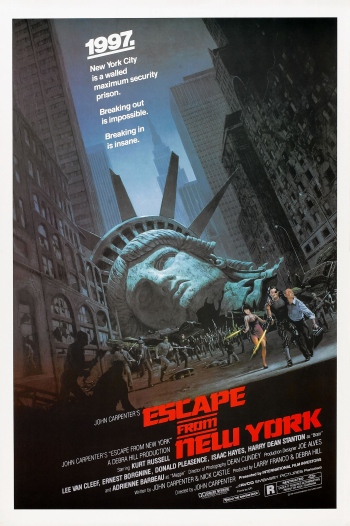 July 11, 1981: When I got my driver’s license at age 16, after completing Driver’s Ed and Training in high school, I felt empowered. Truly. Well, as long as there was gas in the tank, and the car was working. A vehicle that couldn’t move on its own power, in L.A. as a teenager, was probably the most pathetic thing around in my mind then. Had my fill of walking everywhere prior, or taking a bus to escape town.

Been there, done that.

It’s the reason I’ve driven to just about every suburb in Los Angeles, or Orange, County. Started early, once licensed to do so. Went everywhere an auto could in its 80 square miles. Once I graduated, I left the sleepy confines of South Gate. Hung out in the South Bay and the San Fernando Valley the first couple of years afterward. Eventually swung back home later in the 70s, but still on the prowl for elsewhere.

By the time mom and grandmother passed away, cut was my roots to 90280. Thus, more local municipalities and districts I’d not been in were the result. When I became involved with a certain R.N., she became part of that. Hell, she wandered more than I, instead using jet planes out of here. Me? I happily meandered the region of my birth. Los Angeles still plenty big to get lost in.

By early 80s, movie-wise, I was planted on the westside. Living in sin with she-whose-name-must-not-be-mentioned. The only one of my family domiciled on the other flank of the 110. Still am. Took pride in that. Had the longest drive to family get-togethers, but didn’t mind. Yet, movie-watching in the same set of theaters couldn’t scratch the itch of seeing other cinemas I’d not been in. At least once.

That’s how I dragged you-know-who out to the Alondra 6 in Cerritos. “Where the hell is that?”, she asked. “By the 605, in an area north of Long Beach.“, I said. “Why?”, she pined. “Escape From New York is playing there, and want to avoid the crowded theaters here.”, my explanation went. “Uh, huh.” Certainly hadn’t attended this small cineplex before, and never would again after. We enjoyed John Carpenter’s flick immensely, though.

My post’s title being her memorable last words of the experience.

24 Responses to “TMT: “I want to escape from wherever this is.””