Enjoying a well earned respite during this encouraging change in weather and temperatures. I’ve returned to the fertile field of independent offerings proffered by The Sundance Channel and The Independent Film Channel (IFC). To see if my ongoing theory that independents can produce worthwhile and often notable entertainment still holds true.

Thankfully it does. Through two little known, though intriguing tales that start out heading in one mundane direction. Then take a quick turn to the frightening surreal and unknown. Creating…

Beginning with a next to nothing budgeted, middle of nowhere treat centered around the poor man’s Lance Henricksen, Stephen McHattie. Giving surprising life to one time popular radio “Shock Jock”, Grant Mazzy. Relegated to the far, snow driven out back of Ontario, Canada. Working off an exiled penance for some transgression, real or imagined. Broadcasting in the AM range from a small studio in the basement of a non denominational church in Pontypool. Filling his broadcast day with traffic reports from their local “Eye In The Sky” between announcements of lost pets, Saturday Potluck dinner and bake sales.

The day in question begins in pitch black and snow drifted, unlit back roads as Mazzy’s station wagon creeps through densely falling snow. Awake and prepared as he notices a partially clad woman walking through the snow muttering a phrase loudly to herself. Mazzy stops to offer assistance and is ignored. Adding a bit of grist to Mazzy’s consciousness as Mazzy parks. Goes down to the church’s basement to warm up the station’s transmitters. Laces his Thermos coffee with some scotch and begin a new day.

Which begins with weather. Snow. Tied up traffic and a missing cat before a grade school field trip drops by and Mazzy is backed up by the station manager, Sydney Briar (Lisa Houle. McHattie’s wife in real life) and Afghan veteran, Laurel Ann Drummond (Georgina Reilly). Who handle things well until Ken Loney, the station’s “Eye In The Sky”, (Rick Roberts) who reports from the town’s tallest hill. Atop roof of his car. While slapping his chest in an homage to WKRP’s Les Nessman.

Loney reports that there are crowds of people milling about the town’s businesses and Doctor’s office. Fighting and beating each other. Mazzy is skeptical and follows Loney’s live feed as he describes the scene. Then seems to focus and repeat parts of and full words and phrases over and over again. Until Loney goes off the air!

Preparing for a panic of call ins, which turns out to be only a few, but telling. Mazzy and his crew maintain an even strain as questions billow and answers are incredibly elusive. People are behaving strangely. Some dangerously. But, why? How? As whatever evil lurks outside has found its way in. Infecting Laurel Ann as she adjusts dials outside the broadcast booth. Where Mazzy and Sydney conspiratorially discuss options.

Laurel Ann starts stuttering. Then repeating phrases as she pummels the reinforced glass of the booth’s front window. Pounding fists become bloody. And Laurel Ann starts pounding with her forehead. And Grant and Sydney watch in impotent horror. Find the booth’s rear exit which leads to the basement vestibule. Where the town doctor, Mendez (Hrant Allanak of ‘A Nero Wolfe Mystery”) sneaks through a window and confirms present fears. Which sends the doctor back to discover more. And Mazzy goes back on the air about local events and his ideas on transmission and infection. If not his ideas as what the infection does.

Mazzy’s transmissions find ears farther away. Those attached to the Ministry of Defense. Who are also discovering farther flung incidents of fights and mindless riots and have determined that Pontypool is “Patient Zero”.

The concept of a novel, Pontypool Changes Everything adapted by its author. Anthony Burgess. With all the attendant bells, whistles, characters, plot and their actions stripped of excessive weight. And brought to the fore in a tale clocking in at over ninety minutes.

With Stephen McHattie, who has been surprisingly underrated. Diving in and sloshing around in slovenly at first. Yet metering ever creeping, tightening paranoia into that raspy, often persuasive and seductive voice. Poking around with the aid of Laurel Ann and Sydney and discovering an infection. In the grandest of old 1950’s “Us versus Them!” tradition. And turning it on its head. From the possibility of infection or invasion through touch or airborne spores. But by the spoken word!

Huge props for taking the best “What if?”, “What’s happening”” and “Why?” parts of the classic Orson Welles and his Mercury Theater’s ‘The War of The Worlds”.From a secluded and near helpless point of view to alien invasion. And updating it so intriguingly.

Creating the idea of verbal “viruses”. Which can enter the greatest of all computers, the human mind. And begin to rewire it. Through de~evolving it first. And doing who knows what, second?!

Kudos to Bruce McDonald for making the most and more of the basement radio station where all the action and mystery takes place. Plus high marks to cinematographer, Misolav Baszak for seeming to pull in walls and lower ceilings. Increasing claustrophobia and paranoia. In a modern “Backyard Film” that would make George A. Romero proud for its thriftiness and “Bang For The Buck!”.

Leaving us wide open for a second bill in this early double feature. 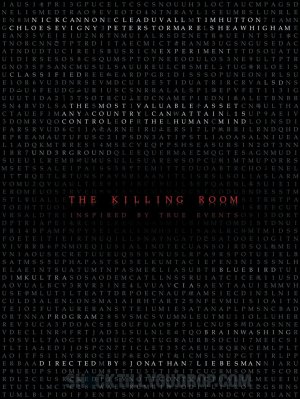 Arriving at what appears to be a fenced and wide fielded storage facility of well spaced, neat white pods somewhere in Louisiana. The four are escorted to a large white tiled room with one table and four inexpensive office chairs.

Pleasantries are exchanged as through a large one way mirror. Their actions are watched by Dr. Phillips. Ever stoic, quiet and deeply devoted to his life’s work; Peter Stromare. Awaiting the arrival of an assistant and protegé, Ms. Emily Reilly (Chloë Sevigny). Who has an idea of what “the project” is all about. But nowhere near what the “selection process” and their progressive “Phases”entails.

The lion’s share of audio input, stimuli and responses of the four volunteers of “Phase One” are handled by large reel to reel recording and playback systems that filters military and NASA like and lab speak into the white, cube like “Testing Room” and corridors behind sturdily locked doors. Each of the volunteers’ verbal responses is fed into Stress Analysis computers. While camera dissect actions, facial responses, tics and any minutia that might be considered “useful”.

Moments later, Dr, Phillips leaves the lab and introduces himself. And explains the day of tests in the vaguest of terms. And to focus everyone’s attention. Dr. Phillips takes an automatic 380 pistol from his lab coat pocket. Shoots Ms. Isalano between the eyes and leaves.

The men panic as colorless gas enters the room and leaves the three men groggy and in a spotless room. When the men come to the large computer screen begins asking Psych Eval, multiple choice questions with ever dwindling times allotted per question. Arguments ensue as answers are whittled down. The questions proceed with elan. And a sudden warning that another may die should an incorrect answer is proffered!

Pressures are applied as more Tech Talk filters in. Along with sudden echoes of Farsi, Arabic and Urdu in conversation and segments of the Koran seeping through the room’s ventilation ducts. Questions continue with less and less time to respond. Bringing on a near panic as escape plans are discussed. Sections of the ceiling torn out and ways to escape through the ventilation ducts are sought.

Ms. Reilly watches, very unsure of the testing process. As a  white Chem suited and body armored Tactical team opens the door. Subdues then kills Baine and Mazzolo as Brodie makes a break for it. Racing down corridors as alarms sound. Then finding the fire stairs upward.

To the subdued before the initiation of “Phase Two”.

An intriguing idea executed with less than subtle nods to The Cube and the stark white sterility and anonymity of THX-1138. Stirred into an audacious dash of the nameless and notorious CIA project, MK-ULTRA, Which tested airborne and other chemical agents on a unknowing civilian populous. And taken to the next step with contemporary ideas like clothing made of C-4 explosive. To hopefully be delivered by any brainwashed, trained and infiltrated future alum of “The Killing Room” to a terrorist cell anywhere in the world.

A very heady idea. As were the FBI’s domestic operations to infiltrate the Klan in the late 1950s and early 1960s. And the Black Panthers and Weather Underground that same decade. In other words. Huge amounts of grist for conspiracy theorists. With far too many tax dollars spent. For negligible results soon to be overtaken by technology.

Though, as a film. It does stand well on its own merits. The volunteers are run of the mill. with no special talents or attributes. Who are whittled down to a manageable number of one. Paul Brodie. All with the aid of Dr. Phillips and Ms. Reilly. With the former having just a bit too much fun under his rigid, lab coated exterior. And Ms. Reilly not really believing what she’s seeing until it is too late.

Direction from first timer, Joseph Liebesman is notable. For both the Testing Room and the dimly lit, shinily glinting laboratory and sound stage on the mirror’s opposite side. Keeping the tension between the volunteers fluid and close to boiling as new twists to the tests are added. Cinematography by Lukas Ettin has the right number of close-ups and odd angle shots. While music by Brian Tyler lets you know that the situation isn’t going to get any better. Only worse.

The cast delivers more than asked. Especially Nick Cannon’s Paul Brodie. Who quickly learns to distrust any of his fellow volunteers. And this whole God awful day in particular. And Chloë Sevigny’s Ms. Reilly. Whose understated, prim and proper attire and buttoned down emotions don’t reveal much of anything. As the stakes are continuously raised. Delivering a very un-Chloe Sevigny performance.

The floor is now open for comments and debate!