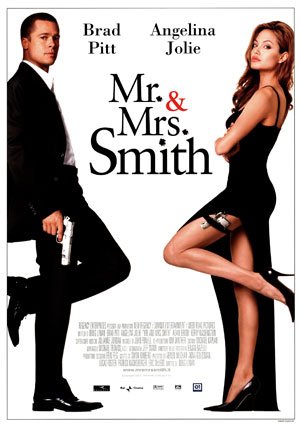 Awhile back, I teed up Doug Liman‘s Mr. & Mrs. Smith for another viewing (this time, on Blu-ray Disc). It’s not a perfect movie, but then again, neither are we. Timing is everything, it is said. I don’t love this film because of the pyrotechnics, or the over-the-top super-assassin skills on display from the pair of hyper-attractive leads, Brad Pitt and Angelina Jolie. Okay, now and then I do get a kick out of the variety of combat hardware on hand and that its being put to gorgeous use by a comely, long-haired brunette…

That’s not really the reason. I love it because of this:

John: “Careful, Jane. I can push the button any time I like.”
Jane: “Baby, you couldn’t find the button with both hands and a map.”

It’s the facets of wedlock, the rubber meets the road variety, and all the little things about marriage, this story absolutely nails on the big screen. The milieu of marriage, as it’s been described by others. I bet you, whether the person is married or divorced… happy or miserable, a hitched person will spot that same detail with regard to this movie. I doubt the single person in the room will fully comprehend what they are seeing. 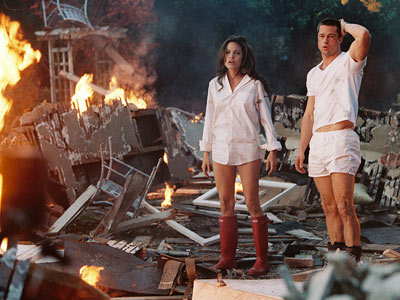 Oh, they’ll get some of it. But, not the portion that is felt by those who have really lived in a state of matrimony. Those of us who are, or have been, married know living that part leaves an actual impression. As in, “That’s going to leave a mark.” For the non-married — living together doesn’t count — think of it as false labor vs. real c-o-n-t-r-a-c-t-i-o-n-s. It’s just not at their level of understanding.

If they pull the pin, the grenade analogy being so fitting, and come back to this film in, say, five or six years… I think they’ll finally get what they’re seeing.

At first, when I heard they were filming this movie, I rolled my eyes and thought, “They’re remaking Prizzi’s Honor.” Yes, it’s about two killers who fall for each other, unbeknownst to them. But, it is nothing like that black comedy of the 80s. When the truth comes out, as it must, even though they are together as lovers, Charley and Irene actually do try to rub the other out (and one succeeds).

This being the other angle that makes me love this 2005 film the more. Here, it’s clear that John and Jane are not the lovers from that earlier film, or that other time. They are married. Whether or not they have clandestine covers to hide behind, they still have a history. A marital one [ever notice that marital and martial are an anagram of the other?]. Review the scene after their climatic fight with each other, when they compare the scars they’ve acquired over the years in their trade.

It’s an analogy of what they’ve come through… together. And it’s that, and the love they have for each other, that makes it impossible for either one to kill the other. They will fight for, and most certainly with, the other to keep it/them going. And that is what I continue to admire. Marriage doesn’t work out for everyone. But, when it does…

Watch the two bookend sequences with the couple in sessions with the marriage counselor, again. Examine the other’s by-play and reactions during them. As tough and skilled as each of these assassins are, they are vulnerable to the other by way of their union. It’s subtly on display. They are connected by a real marriage. Peeves and looks, aside.

And as surely as one could see Bogart actually falling in love with Lauren Bacall in To Have and Have Not, you can spot the same here with Pitt and Jolie.

Man, do they spark when together. I don’t follow or care about what the tabloids say regarding the pair. I guess I identify with the two people on film falling in love — and their characters fighting to stay there. But, more than that, the individuals up on the big screen acted like a couple. And a wife and husband that love and care for each other, no matter their differences, disagreements, or piques, can still be one formidable twosome — as these two are on celluloid.

I definitely am not Brad Pitt, but I’ll put my salt & pepper haired beauty up against Angie anytime, without a qualm. Thank you very much. I’ll give the young folk their due for their current vampire craze in books, TV, and movies as a symbol of romantic love for their generation. Fair enough. They are more than welcome to it. I’m sure my approval or opinion is nothing they seek, anyway. That’s, as Bruce Hornsby coined it, the way it is.

However, I’ll take this strangely romantic action film over their stuff any day of the week. With its high-caliber exploits, explosions, battle scars, and all its emotions on its sleeve, Mr. & Mrs. Smith is, for me, a sweet and bruising metaphor for marriage, partnership, and enduring love. Did I mention that timing thing? This week marks my 25th wedding anniversary. And yes, I’m guilty of putting things in the context of the popular arts (movies and books, especially).

Note: since today is our wedding anniversary, I decided to reprint (and update) the review I wrote awhile back. If I don’t do it, who will? 😉

No doubt, I can be overly analytical and remote, at times. But at the core of my Mexican soul, there beats the heart of a romantic. That hot-blooded latin-thing my spouse reminds me of, from time-to-time. This little film review an homage to the rigors of marriage, in general — and the magnificence of my partner-in-life, specifically. And if it isn’t obvious by now to you, I deeply love the woman I married. More now than when we first walked down the aisle two and half decades ago.