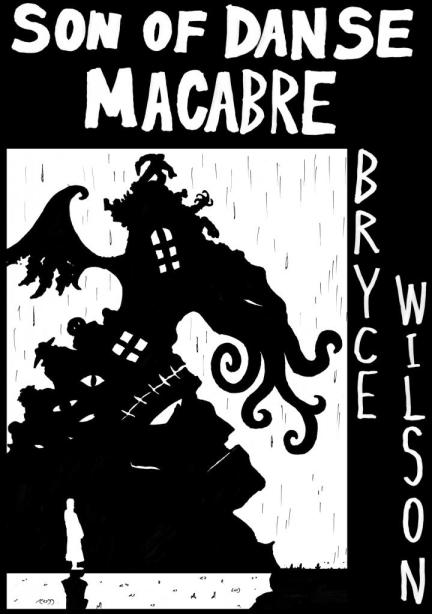 “Horror is defined by most as a subsection of the Fantasy genre, though I prefer Neil Gaiman’s metaphor of horror and fantasy as sister cities with a few dark highways connecting them. At times it bumps up against Science Fiction as well, though the relationship between them has never been chummy. In the great family reunion of literature, Horror and Sci-Fi are cousins who try to never talk to one another.” ~ Bryce Wilson, Son of Danse Macabre

I think of Horror as some do with Faith. Cribbing off of my colleague Darren’s recent thoughts, if you don’t enjoy the fear and thrill of it (whether you’re reading or watching), it is impossible to explain its draw to those who aren’t exactly giddy for the genre. If you do, no further explanation is needed. Yet, there have been very few who’ve given this type of fiction a serious clear look. Author Stephen King’s first non-fiction book, Danse Macabre, being chief among them. Most are curt or hip (let alone scholarly) shots across bow.

Having read King’s superb tome when it first arrived in the Spring of 1981, I hadn’t given much thought how one would go about ‘plaining something I found both frightening and thrilling at the same time since childhood*. I’d reckon I wasn’t the only kid to ever hear, “Why are you watching that?” from concerned adult bystanders in my grandmother’s house. All the same, King did exactly that. In the decades since, others I’m sure have given it a go. I was too busy reading and watching more of the same, and other genres by then, to be interested.

That is until a colleague took up the mantel.

“Danse Macabre, Stephen King’s study of the horror genre from 1950 – 1980, is one of my all time favorite books. King has always been a personable writer, and Danse Macabre is less a dry academic study and more like carrying around a conversation with one’s favorite author. I’ve longed for King to write a sequel and now that thirty years have passed, leaving a period of time neatly mirrored to the original text, it seems the perfect moment to do so.

Unfortunately, since King seemingly has no inclination to write said sequel (though as the excellent essay published in front of the new edition of Danse attests, he has not run out of insightful things to say about the genre) the only way I will get to read such a book is if I write it myself.”

Bryce Wilson is a writer/essayist/blogger I only became aware of a couple of years ago, and my online reading hasn’t really been the same ever since. I mean, when you have an online presence with the name of Things That Don’t Suck, what do you expect? The self-described “Demon To Some An Angel To Others“, he’s been a keen scribe and critic of pop culture/arts, in general, and one wholly influenced by this genre, in particular. That much was well evident in his published 2012 eBook, Son of Danse Macabre (available on Kindle and Nook).

First staged on his sister blog site, the work was clearly (forgive the cliché) a labor of love. There’s no lack of passion or rumination, here. Taking on a similar template as King’s non-fiction work, it remains a concise title that makes an appealing read for those not into those things that go bump in the night solely on BW’s skill with the written word and an acute frame of reference. Yet, it’s to the point of being absorbing (like Bryce and me, the film The Blob was a rite of passage in boyhood), for those horror consumed in their early years, as it did many of us ‘different ones’. Then and now.

For either group of readers, you won’t totally agree with all of Bryce’s honed observations relating horror as his personal experiences will not be yours. That goes as a plus in my register, BTW. This could well apply with King’s original book. Hell, I still vehemently disagree with SK about his thoughts on The Exorcist, so there. Nevertheless, this work was a wonderful reading experience. Even though I still miss turning an actual page (yeah, I’m two decades older than Mister Wilson), the e-version accounted itself well. Thank the dark lord for my iPad and the Kindle app, I say.

Certainly, Bryce’s take on the gamut the genre provides, be it written or filmed, will strike curiosity like a match and vex some who open this up. Again, that’s a good thing. A conversation without a difference of opinion anywhere in the mix is simply misplaced (and featureless) fandom, in my opinion. You’ll find none of that here, that’s for damn sure. His look at Clive Barker’s Hellraiser and the now well-known difference of opinion with Stanley Kubrick’s adaptation of King’s The Shining were certainly highlights. Plus, it was good to find another who appreciated Day of the Dead.

[I won’t comment on the rare lowlight I may perceive since I’m old enough to remember a vintage Twilight Zone episode where the Devil himself answered, to one of Hell’s newly arrived house guest questioning his room’s accoutrements (paraphrasing), “There’s an exact one up there in Heaven, too.” It’s all a matter of perspective.]

Given the heft of taking on such a challenge, I mean anything following in the Master of Horror’s vootsthaps could have been “an ugly thing“, this endeavour could have easily crashed and burned. It’s to Bryce Wilson’s credit, and perhaps that scary and scarring first viewing of The Bride of Frankenstein, that it paid off so very well. I commend him, as well, for exploring other venues, namely video games and horror comics, for us folk-of-a-certain-age that may have either overlooked and forgot in our sunset years. This eBook is well worth the price of a download, my friends.

Disclaimer: though I was advanced an electronic copy for this review, I bought my copy of Bryce’s eBook last year and was not compensated. Drats!

* for the longest time, in my opinion, the best representation of how horror achieved that dichotomy was wonderfully given life in (and literally coursed through) Chicken Heart, Bill Cosby’s brilliant comic routine of the 60s.