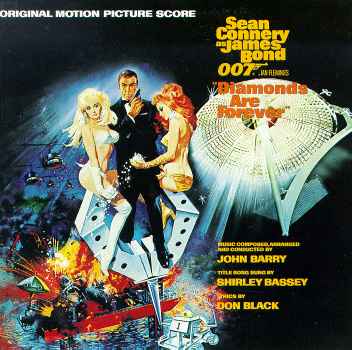 I promise just because Peter Travers went and ranked every Bond film, which I reacted to it, I’m not planning on making a Versus Rolling Stone article a regular thing. Really. That is, just as soon as I clear up one itsy-bitsy little disagreement I have with Andy Greene at the magazine regarding an article that preceded the Travers’ (and which followed Adele’s Skyfall theme online début): 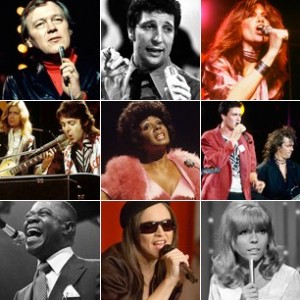 As described in his intro:

“The James Bond series has undergone many changes over the decades, but the films’ producers have never stopped asking the biggest pop stars of the day to record theme songs. Adele is the latest member of the club, with her new title song for Skyfall. Many of the Bond themes that came before her have become classics, while others were quickly forgotten. Which way will her song go? While we wait to find out, here’s a look back at the 10 greatest James Bond theme songs.”

Again, I don’t expect anyone to agree with me. This is just one Bond fan and music listener’s opinion (who happens to be totally flummoxed at the moment with a couple of these choices in particular). No big deal, really.

(1) Diamonds Are Forever [RS #5] – sung by Shirley Bassey, music/lyrics by John Barry, Don Black. My case for why all Dame Shirley Bassey-sung songs are on my list is located here.

(2) Goldfinger [RS #2] – sung by Shirley Bassey, music/lyrics by John Barry, Anthony Newley and Leslie Bricusse. See above, and this was a no-brainer, yes?

(3) You Only Live Twice [RS #4] – sung by Nancy Sinatra, music/lyrics by John Barry, Leslie Bricusse. Reasons for this are located here.

(4) Live and Let Die [RS #1] – written and sung Paul McCartney (backed by Wings and produced by George Martin). The most Beatles-influenced song on the list.

(6) Thunderball [RS #10] – sung by Tom Jones, music/lyrics by John Barry, Don Black. The man still sings it at his concerts, and he should.

(7) For Your Eyes Only – sung by Sheena Easton, music/lyrics by  Bill Conti, Mick Leeson. Second-best Moore film, and Sheena was a real highlight.

(8) Goldeneye – sung Tina Turner, music/lyrics by Bono, The Edge. Overlooked too often in my opinion, maybe because of the others here.

(9) A View to a Kill [RS #6] – written and sung by Duran Duran, music by John Barry. Another no-brainer, and the single best thing in this the worst Bond film.

(10) Moonraker – sung by Shirley Bassey, music/lyrics John Barry, Hal David. Again, already covered, and another song that was one of the best aspects of a poor film.

Note: Rolling Stone and Greene have to be kidding (or looking for page views) by listing the absolute worst Bond song, Madonna’s travesty, in their Top 10 (criminy, at #7!). Adding insult to injury, they placed the quite pedestrian ‘From Russia With Love’ there, too. Matt Monro’s effort is nowhere near the bad adjective — it’s just not anywhere near the great one, either. So registering Madonna’s train wreck ahead of it is just another affront.

Now it could just be me, but I look at the Bond theme song as the one played during the opening titles of said movie. Using this framework, I’ve never even considered ‘We Have All the Time in the World’ as the theme song for ‘On Her Majesty’s Secret Service’. That’s still John Barry’s fun instrumental for me and this non-Connery flick. Although, I do think of Louis Armstrong’s wonderful take of that Hal David and Burt Bacharach song as the film’s love theme. It’s the only time the producers had this kind of schism with the Bond songs.