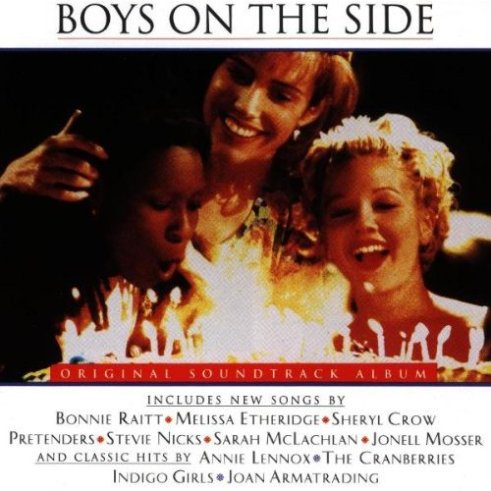 Every so often, my wife wants me to take her to a movie. It doesn’t happen often, or often enough. That’s so because our movie tastes are decidedly different. In actual fact, my spouse recently reminded me she was not interested whatsoever, after we caught the new 3-D version trailer, in watching the re-issue of Titanic. She doesn’t like either the movie or the filmmaker.

Yet, for the most part the films she’s  brought me to, I’ve somehow enjoyed. Sometimes, it’s for reasons beyond the movie’s story. Case in point, Boys on the Side (1995), directed by Herbert Ross. An exciting, blood-soaked martial art revenge thriller it’s not. Despite that, I have to admit I got snared by the dramedy about friendship and women relationships.

See, I can be sensitive — it’s rare — but it happens. The other aspect that’s held my attention even longer was the film’s soundtrack, though. It’s of the needle-drop variety that the filmmakers put together using popular song by various artists. And what stellar selection it has. Over the years since, it’s snuck up on me that it has been one of those audio CDs that’s received steady play. Examples to prove my point:

If the Cranberries’ Dreams seems familiar, it should be as it’s been used in a number of film soundtracks: Mission: Impossible, You’ve Got Mail, The Next Karate Kid, Shot Through the Heart, and The Baby-Sitters Club. And it was this film that introduced the song and group to me (and has been replayed countless times on the ol’ iPod).

While I remain a big fan of Roy Orbison’s original You Got It, this film actually featured two distinct covers of that great song. As it happens, co-star Whoopi Goldberg has an earnest version that’s pretty heartfelt in the context of the story. Still, I’ll showcase hometown girl Bonnie Raitt’s cover here because it rocks as well as the man from Vernon, TX, in my mind.

For those of you that are curious, below is the full listing of the soundtrack in question. I guess it’s just another one of those things gifted to me (even if I was kicking and screaming initially) care of the woman I love.