Normally, twenty-six episodes doesn’t make for much of a television series, especially in this day and age. That’s even more certain if it’s a mere 30-minute show dismissed as some kids program. Then again, 1960s and The Green Hornet were far from normal or even ordinary. Based upon George W. Trendle‘s famous character in the radio serial that originated in the 30s, this program was given its television adaptation in the 1966-7 season on the ABC network mainly on the success of the Batman series. I, and the kids my age, instantly became enthralled by it — most of us were born in the 50s when that radio program ended and had no inkling whatsoever to its history. No matter, nothing comparable existed in that era of TV, let alone film.

Though the same company produced both The Green Hornet and Batman, they had little in common beyond that aspect. With the comic books in circulation at the time, everybody I knew waited on bated breath for the arrival of Batman. However, what we got was loaded with heavy camp and semi-comedic storytelling. The TV show was better than nothing, we thought. However, The Green Hornet‘s entry soon after brought with it, as TV.com noted, “… a more serious and realistic approach to masked crimefighting.” While we put up with Batman, which in many ways with its 60s psychedelia played much better for adults than those just entering their teens, we utterly ate up The Green Hornet on its weekly run. The production company even thought a cross-over episode between the two would somehow enhance both series. It didn’t. 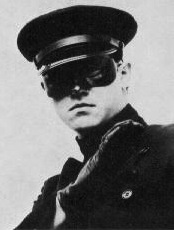 As mentioned in my previous post, the reasons for our excitement then, and the enduring love for this program in the decades since, was very clear. In conjunction with that more serious style, it was primarily for the likes of Kato (as portrayed by Bruce Lee) in the cast. Sidekicks were a well-known commodity in comics, yet none came close to this character on the small screen. You simply couldn’t take your eyes off of Kato, or Lee for that matter. On the schoolyard back in the day, everybody emulated Kato (no one even attempted to imitate Burt Ward’s Robin). Additionally, though both series had iconic cars, we’d take the Hornet’s weapons-strewn Black Beauty Chrysler hands down. You could imagine the uproar the show’s cancellation after only one season had on us. ABC didn’t have the decency to do re-runs afterwards, a travesty fans of the show hold against them to this day.

For me, all of this can be crystallized in one particular episode and specific scene from The Green Hornet.

Episode Synopsis: Duke Slate, a crime boss, decides it’s time to extend his protection racket to Chinatown businesses, using Low Sing and his tong to handle the muscle end. Low Sing, a proponent of the Preying Mantis style of Kung Fu, is a formidable opponent and gets the better of Kato in their first, brief encounter. After a kidnapping, engineered by that martial arts pro, it culminates in the clash finale between the Green Hornet and Kato and Duke and Low Sing about who will prevail.

Keep in mind, this was late-1966. Today, having opponents fight on television using sophisticated martial arts choreography is a given (and even expected by viewers). Back then, it was nothing short of groundbreaking on U.S. TVs. Plus, up to this point in the show, Kato was regularly mowing the opposition thrown against him down like bowling pins (and he the ball). That’s another reason this episode stood out — Kato ends up in garbage can right after his first meeting up with the character Low Sing (admirably performed by the under appreciated Japanese-born American actor Mako). I mean, Bruce Lee vulnerable? It’s nothing less than seismic for fans of this character and only built tension toward that program’s climatic fight. If this was a western, you were already savoring what was upcoming on that dusty street scene.

Kato: “You know, if we ever meet up with that masked gung fu man again… I want him.”
Britt Reid: “You got him.”

It must be said that Van Williams (as Britt Reid/Green Hornet) had an almost thankless job. The actor was one of those handsome types that regularly sprouted from the 50s and early 60s and for which earned him work in such contemporary TV series like Bourbon Street Beat and Surfside 6. It wasn’t his fault he was paired with and upstaged by the one and only Bruce Lee on this show. His acting career wouldn’t go further beyond this program, though he did come back to do a cameo in the 1993 biopic, Dragon: The Bruce Lee Story, wryly depicting a director on The Green Hornet. I mention all this because in this scene, he’s actually crucial to its success. Besides coming off well as a tough guy, it’s Williams as the masked hero who successfully baits the dangerous man in the room, Low Sing, so convincingly, thus setting the stage for the final Kato vs. Low Sing confrontation.

While it remains a short sequence in duration to the episode (almost three minutes in length), that’s still a fair portion of a 30-minute program (commercials included) dedicated, fittingly, toward a big face-off. Director Foster and writer Hoffman deserve some credit for crafting a considerable scene. As usual, Bruce Lee performed all of his own fighting stunts, along with the choreography (as no one else was doing anything close to this kind of staging in Hollywood at the time). Mako (who’d earn an Oscar nom for another Chinese character, the doomed Po Han, that same year with The Sand Pebbles) is no slouch in the scene. Although, it should be mentioned he did not perform his own fighting (Dan Inosanto, the noted Filipino-American martial arts practitioner and close colleague to Lee, doubled for Mako).

Lastly, this episode also signified another rarity in television of that time: death by martial art combat (as Low Sing doesn’t survive his last encounter with Kato). It would take another six years before the Kung Fu pilot movie would do similar on network television in the U.S. This denoted another major difference between this show and its Batman, or any other of its mid-60s, counterpart. In any case, I think this sequence was the height of the program’s too-short run. The Green Hornet played it straight and serious when few gave this genre any kind of respect (or thought that it would amount to anything beyond just a niche). The Green Hornet proved to be more of a forerunner than people knew at the time. Enough that it maintained a decades long following, and eventually (after a long and convoluted development period) turned into a 2011 film (it remains debatable how successful that adaptation was, though). Hopefully, some studio will eventually realize this and release the series to disc. Fans like me can always hope.