As I finish my look at the wonderful gift my bride of 23 years gave me for our recent wedding anniversary, this is the third and last entry that reviews the particularly intriguing addendum titled “Selected Los Angeles Viewing/Listening/Reading” that lies within the publication. The photographic Taschen book, Los Angeles, Portrait of a City is a marvelous work written by Harvard PhD. and USC Professor Kevin Starr and David L. Ulin, books editor for the L.A. Times.

Edited by Jim Heimann, it incorporates some gorgeous history-laden photographs for the City of the Angels, the place my family and I call home. It is its own highlight and worth discussion. For this one, I’ll showcase their viewing collection, one that has what it is to be L.A. firmly in its sights, theater screens, and in the hearts of movie goers. I’ve included the IMDB links for the films on their list, as well as the authors remarks for each on the film roll call. What are your thoughts regarding this list? And what would you add, if you could?

For those who are interested, here’s their viewing breakdown by calendar period: 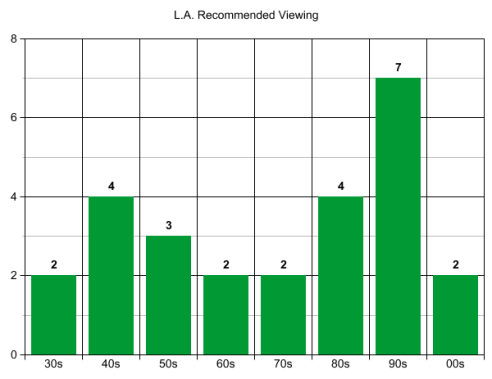 Note: the first thing that jumps out is the sheer number of films the authors have from the 90s. It’s almost double the figure each of the next most popular decades, that of the 40s and 80s. This signified to me as they’ve moved from books and song and on to film in this work the influence shifted forward across the decades in the authors’ thinking. I mean, the 30s-40s held sway for reading material, the 60s, 70s, and 80s for musical listening enjoyment, and now the 80s and chiefly the naughty nineties captured their hearts and minds in movie viewing. This, I didn’t expect.

I’ll not list all of mine as I already enumerated some two years ago in this old blog piece. Still, I feel the need to say something more about this inventory as a native Angeleno. First, I think it strange (not bad, mind you) they’d picked Criss Cross over (or just didn’t include) the classic White Heat from the 40s. They also had Gidget above The Bad and the Beautiful, Singin’ in the Rain, War of the Worlds, Kiss Me Deadly, or Hell, even Them! for the 50s? Really? I’d have added the 60s cult classic Point Blank to better fill out that era some. The 70s were scrimped on, too (how about Escape From The Planet of the Apes or The Omega Man for sci-fi’s sake?).

I think Blake Edward’s S.O.B. would have been ideal choice for the 80s. And for the decade of Ronald Reagan, John Carpenter’s They Live remains the perfect science fiction counterpoint on that era in the Southland. The 90s was filled with a number of diverse, thoughtful L.A.-inspired film and they selected Pretty Woman?!? Criminy! I’d have added Altman’s The Player, Burton’s Ed Wood, or Michael Mann’s Heat. Lastly, for the 2000s I think leaving off Mulholland Drive was a blaring omission. Two films that wouldn’t be considered due to the publication deadline, Clint Eastwood’s Changeling, the under appreciated 1920s L.A. period piece, and Nicolas Winding Refn’s neo noir Drive already have a growing connection with those that live here in La-La Land.