dis•as•ter |diˈzastər|
noun
– a sudden event, such as an accident or a natural catastrophe, that causes great damage or loss of life
adjective
– denoting a genre of films that use natural or accidental catastrophe as the mainspring of plot and setting : a disaster movie.

– a person, act, or thing that is a failure

During the 1990s, actor/writer/director Sylvester Stallone ventured away in film from his two biggest personas onscreen. That of Rocky Balboa and John Rambo. Age will do for that to you. Both roles brought notoriety, fame, and not surprisingly, some baggage. To his credit, for better or for worst, Stallone attempted a change of pace with a variety of unexpected films during this period. Action, comedy, and drama were each undertaken.

Some worked at the box office with little critical acclaim (Demolition Man, 1993) or were spotlighted later by critics and fans even if the film failed with ticket buyers at the time (Cop Land, 1997). Others were best left behind (My Little Hollywood, 1997) or went on to achieve the dubious distinction of being so bad that the film was actually and perversely entertaining (The Specialist, 1994). You gotta give it to him, the movie star gave his career a literal roll of the dice with this undertaking.

Though it gathers little attention these days (especially after Sylvester Stallone successfully returned to the Rocky and Rambo franchises during the 00s), the 1996 Rob Cohen-directed film, Daylight, offered an under-appreciated homage to the disaster films of the 70s. Although, modernized with some 90s sensibilities, events, and startling effects. I’ll admit, here and now, that I am a long-time fan of the disaster flick.

While it didn’t originate during that particular decade (the concept is as old as silent movies), the genre really hit its stride during the time that became known as the Sexy Seventies. Airport (1970) and, of course, The Poseidon Adventure (1972, and celebrating its 40th anniversary this year) kicked off the decade by making this type of film big box office as never before — studios noticed and Earthquake and The Towering Inferno (both in ’74) soon followed up to cash in on the craze.

Undervalued fare from previous decades, like The Last Voyage (1960), never had it as good as they did here. 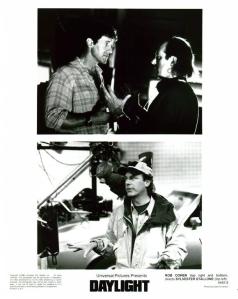 If you enjoy this variety of movie, I don’t have to convince you at what makes it so captivating. For all the special effects and tension built into the care and filming of cataclysm onscreen, they really are simple and direct human melodramas. Sometimes strung together as enlarged family struggles. These sagas are just staged and wrapped around supreme survival situations.

At their core, these features range with raw human emotion as they play out through the interaction of fallible individuals, rising and falling to the whim and misfortune of nature or the folly of human enterprise. In other words, Life as we’ve come to know it, just pushed to the extreme. The best of them (those previously mentioned) manage to deftly weave their story around the ridiculous or  exaggerated deaths of people. Enough for the audience to care about the characters still surviving… and perhaps recognize themselves up there onscreen.

Essentially, what’s happening here is the cinematic equivalent of the ancient punishment known as ‘running the gauntlet’. At least, the version of the foregone punishment whereby the participants faults or foibles are deemed paid in full so that they can rejoin the living with a clean slate. If they make it to the brutal end, that is. Modern, effects-laden disaster films (cough… Roland Emmerich) seem to just get off on elevated, grandiose body counts through FX spectacle these days rather than this operatic aspect as their real payoff, however. Screenwriter Leslie Bohem and director Cohen clearly seemed to be paying attention to the old style of the genre with Daylight, and it showed. At least, for the few who watched and picked up on that during its lackluster initial release.

Another key facet was the effects deployed in the movie. Independence Day, the ‘other’ disaster flick out that same year — it was just disguised as a sci-fi, alien-invasion film — made extensive use of the CGI effects of the time (all to the tune of enormous box office returns). Daylight, on the other hand, delivered its little seen shock and awe the old-fashion way. Through the use of time-honored miniatures, imposing sets (these were Italian, btw), and things that really, and not virtually, came crashing down. Or simply just blown the Hell up. This was probably one of the last studio productions in the disaster genre that did so — 1997’s Dante’s Peak, also written by Bohem, came close with a similar effort in that decade’s continuing revitalization of the disaster movie.

Though, it wasn’t exactly laden with ‘above the title’ name actors, Daylight did carry on the genre’s tradition of using experienced character actors to do the yeoman heavy lifting throughout the story, along with some surprisingly young talent. Claire Bloom, Karen Young, Dan Hedaya and even future The Day After Tomorrow supporting actor, Jay. O. Sanders, along with others, delivered solidly. And were assisted well with the up-and-comers of the time in Danielle Harris and Viggo Mortensen. However, I think the surprising heart of this film was carried out by three actors in prime character roles. The always underrated Stan Shaw (he who co-starred with Stallone in Rocky oh so long ago) was vital in the ill-fated (and typical) support role.

His character, in fact, is the only one that uses the movie’s title in his dialogue as the spur to getting the survivors to safety. His character’s brief leadership and loss in the small group of survivors is felt right off, and set the tone for the struggle to come.

The remaining two actors really made for a strange combo that worked in unexpected ways. Sylvester Stallone and Amy Brenneman brought off the pairing that anchored the film. Both would have their second best (and nearly forgotten) performances of the decade in this, I believe — with Brenneman’s work in Heat the year before and Stallone’s highly underrated performance in the aforementioned Cop Land in the year ahead being their best. For a genre role, Amy is remarkable in this.

Singing a pissed off version of New York, New York as she drives her car into the doomed tunnel entrance nails the character’s frustration with the city like nobody’s business. So, too, is Stallone playing against type character in the film — our hero doesn’t have all the answers when pressed and is thwarted more times than not — that made for a unique and one of his more humbled performances around. Both are refreshing for what each brought to their parts, and because the city (to put it bluntly) really has it out for each of them. They develop a chemistry, without much chance at romance, that binds viewers to the film.

Let’s be clear. I’m not talking about this film as Cohen’s, and anyone else’s, masterwork or something that shouldn’t be missed by cinema aficionados. No, it is a genre movie, plain and simple. However, in such films there are bits of real life that make the experience of watching somehow relate to the audience, all the while existing to vicariously thrill and entertain those in the seats. This is what we strive to catch as movie-watchers, isn’t it?

And using the above definition that lead off this piece, Daylight qualified on all descriptions, I think. Though it failed at the box office, it remains a disaster flick in the best sense of the word. Yes, it could be said all the expected tropes from this category of film were picked off from a checklist, of sorts. Still, the film attempted to be contemporary in its storytelling whilst adhering to the genre it sought to pay tribute to.

Looking back from a post-9/11 perspective, it’s not difficult to spot the impact of that decade’s World Trade Center’s bombing (three years earlier in 1993) on this movie’s screenplay and the filmmakers’ thoughts. Rob Cohen made certain to include the Twin Towers in the opening and closing shots of the film. In doing so, he may have inadvertently, and for the foreseeable future, marked it for audiences, both new or old, to notice and reflect upon with more gravity than the director ever intended.

While the film is very 90s in its concept, it leans heavily on its 70s disaster epic roots in execution. Besides, it remains very watchable all these years later, if you’re into it as I am. Last year’s 15th anniversary Blu-ray Disc release is well worth experiencing, if you are. At any rate, Daylight as a film offered fans of disaster flicks a reminder that in tragedy comes survival. It’s that ‘kick in the pants’, ‘look forward and not back’ aspect that gets people through catastrophe. That’s got to count for something. If it is, then it’s for this I hope this piece of filmmaking, and the genre, doesn’t get forgotten.