In commemoration of my all-time favorite werewolf film, released 30 years ago today, I send a shout-out to writer Damian Arlyn as he spotlighted this landmark work with a most excellent tribute piece, published on my friend Edward Copland’s blog, today. I enthusiastically recommend:

Beware the Moon and Stick To the Road

In honor of today’s celebration, and why I continue to sing the film’s praises, I updated and re-tasked an article I wrote on the old blog for last year’s Halloween. No disrespect intended to those who “… think The Howling is a much more complicated, visually striking and tonally successful mixture of horror, horror history and bloody comedy than Werewolf…”, but I remain firmly in London in this regard. 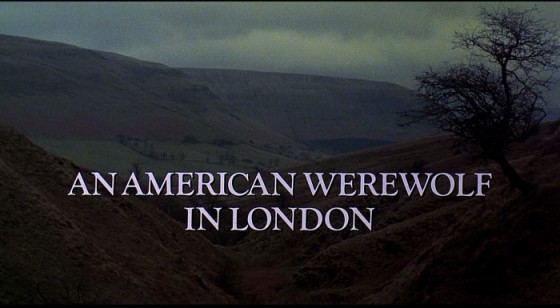 Looking back at things as I’m wont to do (my daughter and I inherited my mother’s nostalgia gene, so I have an excuse), I noted it is almost  three years ago that I published my very first Halloween-dedicated blog post. Hard to believe I’ve been blogging for that long. Among the films noted within the piece, I celebrated one of my all-time favorite werewolf films:

“The 1981 An American Werewolf in London is first on the list. At only 97 minutes, director John Landis created one of the best werewolf films, ever. Effectively moody, and with great bits of American and British humor thrown about, it still holds up well in story, even after a good many years. The one thing about this particular horror genre, that goes back to the original, The Werewolf, is its tragic, sad nature. And, Landis, though remembered for a lot of excesses in his films, recognized this fact when he brought this to the screen. If you saw this in the theater (as I once did), many were more than a little stunned by its final outcome (especially since it’s so easy to care for those plucky Yanks). The other wonderful thing about this film is its great soundtrack. Using many of the older, moon-themed songs, this really connected with the pop culture in a way seldom done before. If you’ve seen this movie, you know what I write about when you recall the use of CCR’s Bad Moon Rising as the pre-cursor to Rick Baker’s now famous transformation sequence of actor David Naughton. The year 1981 had another solid entertaining werewolf movie, The Howling. But, it is this one that I remember more dearly.”

So with 2010’s upgrade to the Blu-ray Disc version of the film, I decided to highlight and examine the clip I mentioned many months ago. It remains one of the sequences from the motion picture I remember most. Given the wonderful (some see them as grisly) shocks and effects throughout the film, this has to be one of its most quiet, but meaningful, progressions in it. In my mind it remains a testament to the care given to the movie and the craft by the filmmakers of the piece.

The sequence started innocently enough. The ill-fated David Kessler (Naughton) walks his new love, the winsome nightingale Nurse Alex, out of her flat as she leaves to go to work (returning to the same hospital where she cared for the wounded young man back to health following the attack that also killed his friend Jack). Jenny Agutter, as Alex, was only fleetingly seen at the beginning of this segment. However, I think she really communicated well to viewers her feelings toward the one she finds “very attractive… and a little bit sad.”

Her quick glances back to David as she departs were the small, telltale signs of her character’s tenderness towards her star-crossed lover. In the end, those gestures deliver a yearning that’s never going to find purchase.

As Alex departs the setting, director John Landis immediately began to key the audience to something terrible coming. He did this by having the protagonist turn and be confronted by nature. Contrary to his big city surroundings. Specifically, animal nature. The age-old belief (and plot device) of animals sensing danger was yet again deployed on film when David was greeted by the warning yap of a small dog — to the delight of the small girls holding its leash.

Landis, in fact, used this tactic twice during the sequence. The second time byway of a hissing cat moments later. I guess it proves filmmakers didn’t show any pet bias — though the feline’s agent probably complained the dog was on scene first. I swear this was the exact same cat from Alien that two years earlier attempted to warn the similarly unfortunate Brett in the Nostromo cargo hold. Ah, but I digress. 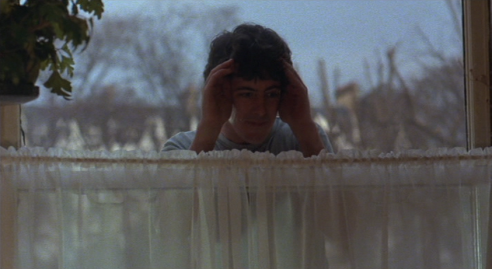 It’s during this junction, which served as the prelude to the Credence Clearwater Revival song, David soon discovered he is locked out of Alex’s apartment. When I first saw the film on its initial run in ’81, I thought it another (and typical) comedic touch for this director. Now I’m of the belief that while it remains that, it was more crucially a symbol in the scene of something the character was barred from. Specifically, whatever normal, pre-werewolf life David once had. Now fleeting, an existence forever lost.

This was something film historian Dennis Fischer noted in the Nightmares in Red, White, and Blue: The Evolution of the American Horror Film documentary when speaking of The Wolfman‘s screenwriter Curt Siodmak‘s belief of the werewolf as character. He remains:

“… along the lines of a Greek tragedy. Here’s a person, who despite fate, then has to try and deal with it.”

I may be overreaching here with this assertion, but so be it. I think it’s adds to the unease and undercurrent of the sequence. 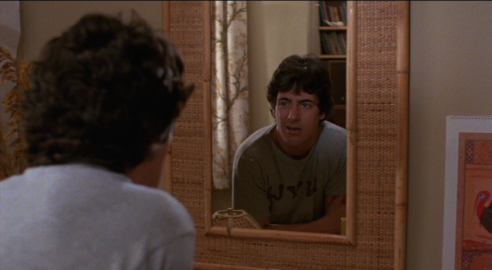 Even when our plucky Yank returned to the living quarters, and using that smart-alecky charm of his in front of the mirror to poke fun at the situation. Seemingly, it’s a whistling past the graveyard response shared with the audience. Landis’ penchant for black-humor throughout the film helped to undercut the terror, but it also enhanced some of the horrifying elements for viewers. Here used to raise the apprehension level another notch.

Pay attention, as well, to the Mickey Mouse toy statue during this stretch (we see it in the scene backgrounds a couple of times). The statue was an innocent pop culture bystander to David’s character, and one the director will point back to (via cutaways) later during the agonizing transformation sequence that followed. As writer Michael MacKenzie keenly observed in his HD-DVD review some years ago, the toys…:

“… seemingly observing David’s agonising transformation into the werewolf with their emotionless, fixed smiles, somehow accentuate his pain rather than making light of it.”

At this point, after David turned off the limited and soapy television early 80s Britain had to offer (around the 2:48 mark), Bad Moon Rising kicked in for the audience. IMO, as with the other elements set forth in this sequence, that 1969 song was a pitch perfect match for the mood of the piece and was an ideal selection by the filmmakers. Along with the other moon-themed music tracks and Elmer Bernstein’s original score. It was what my friend and author John Kenneth Muir refers to as “…a perfect movie moment”. A “…momentary conjunction of subject matter, theme, song and film technique…”

Written by John Fogerty as his answer to the “…apocalypse that was going to be visited upon us.” [Songfacts], it was the lead single from CCR’s Green River album. Though it came close in the U.S., the tune did top the U.K. charts for three weeks that September. Kudos to the Brits.

As the segment reached its apex through the song overlay, David (in almost anxious anticipation) restlessly prowled in and around the flat to the beat of the swamp rock tune. His persistent return to the fridge, stating that he’s “not hungry”, and repeating the historic quatrain from Jack and the Beanstalk (again, at the mirror), “fee-fi-fo-fum, I smell the blood of an English man”, used to up the ante.

The brief segue had a it’s almost here appeal. That it all proved prophetic was the point of the segment. This sequence used the audience’s expectancy to help tell the werewolf story. We all realize what’s coming, Landis knows that, too, by how he constructed the piece. Its built-in complicity with the movie viewers the “secret sauce” that makes it so special. 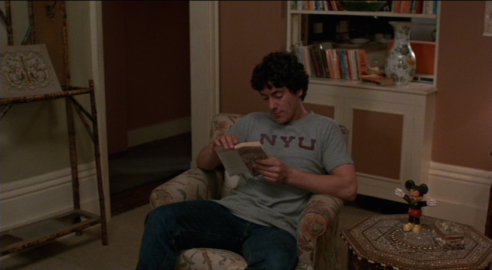 When I previously recalled this movie scene, I thought it played Bad Moon Rising all the way through. It doesn’t. Landis purposely delayed the payoff one last time, again, to raise the tension and surprise. As a final bit of manipulation, he ended the sequence unexpectedly with an abrupt cutaway to an innocuous scene not shown in the video clip, with Alex attending a favored child patient before bringing the audience back to the now built-up and dreaded transformation part. 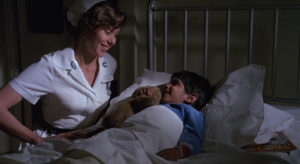 Notice, however, where Landis and his editor Malcolm Campbell abruptly cut the scene. Prematurely, right before the song ended, at a break with this predictive line of the tune:

For me, all of this added up to why I love this understated sequence in An American Werewolf in London. Even among the number of memorable moments found throughout the film, some of those in the jaw-dropping category, this stood out. Certainly for me. As Damian wrote, it was “… a ‘game-changer’ in the genre of horror…” The film’s joining of the most fitting of song for this pivotal scene sealed it for me long ago. The tune’s association with AAWiL, and cinema history, why I keep coming back for both, even decades later. So, Happy Anniversary.