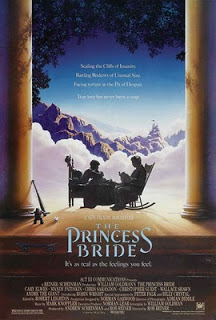 Though my blogging friend Rachel (from Scientist Gone Wordy) and I have done a small number of what I’ve termed ‘parallel posts’ (separate reviews of a specific book and its accompanying film adaptation — not to be confused with this ‘parallel’ post) in 2010, they’ve been solely from the science-fiction category. That’ll change with this instance, however. I’ll review the 1987 film, The Princess Bride, directed by Rob Reiner.

My northern California colleague (now in New Zealand) will set her hand (and mind) to William Goldman‘s source 1973 fantasy adventure novel of the same name. Coincidentally, I happened to pick up the Blu-ray Disc version of the film just before Rachel suggested it as parallel material. You see… great minds do think alike ;-). Her book review can be found here:

The Princess Bride by William Goldman

A brief synopsis of the film: the motion picture opens to a school-age kid, the coughing bedridden variety, playing a vintage video game while he’s home sick. All of this to the worry of his mother, and to the lament of his loving grandfather, who’s shown up to read a chosen tale to his cherished grandson. The book is entitled The Princess Bride, and tells the classic and adventurous love story of Buttercup and her steadfast beau from childhood, Westley. How true love prevails, through some fantastic perils and danger, is the primary story-line of the film.

Grandson: “Has it got any sports in it?”
Grandpa: “Are you kidding? Fencing, fighting, torture, revenge, giants, monsters, chases, escapes, true love, miracles…”

My Review: Originally, I saw this film the year it came out… on a date, in fact. But since it was before courtship with my lovely bride of more than two decades, we’ll quickly get off that tangent, thank you very much. What I adored about the film more than a quarter of a century ago is still in effect. It contains a real spirit of adventure and fantasy, along with its romance, without it becoming a saccharine mess that you find in some fairy tales. 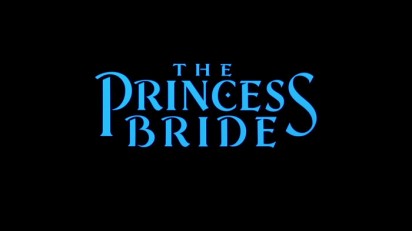 The Princess Bride played with the storybook convention without being insulting to the form. Good thing since the film likely had a large following of kids in the audience when it first appeared, or later watching at home. That was some trick. Entertain the youth, wink at the adults in the audience, and keep everyone interested. Rob Reiner accomplished this feat, following the screenplay written by the book’s author, in only his fourth stint in the director’s chair. He may have had some missteps later in his career (cough… North…cough), but this film wasn’t one of them.

It was no surprise there that the material would be treated deftly by said William Goldman, too. An accomplished American playwright and novelist, Goldman remains a veteran Hollywood scribe that’s had some famous screenwriting credits under his belt even before being handed his own novel for conversion to film. His Adventures in the Screen Trade is likely considered mandatory read for anyone even thinking of a career as a screenwriter. As well, a good many of his credits are some of my favorite films.

From the seminal All The President’s Men to the epic, but flawed A Bridge Too Far. Adapted Stephen King (Misery, and consulted on Dolores Claiborne) and even written for John Carpenter (Memoirs of an Invisible Man). His screenwriting spanned different genres with The Stepford Wives, Chaplin, and The General’s Daughter.  Indeed, he wrote the Oscar-winning screenplay for one of the best westerns of all-time, which I covered in 2012. Previous to this, he adapted his own novel, Marathon Man, with solid results. Got to give the man credit for not screwing up his own work. 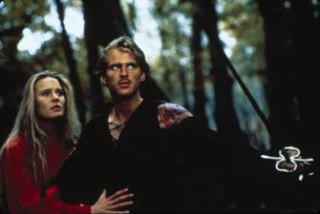 The other aspect that worked so well in the film was the cast. Everyone was given a chance to shine, even if it’s only for a small bit or two. The fact that there was no ‘A’ list star (of the time) topping the bill helped to keep the story at the center. Nevertheless, having two comely blonde romantic leads kept with the fairy tale tradition being sent up here. I swear you couldn’t find a more youthfully beautiful performer to center on.

And, Robin Wright as Buttercup wasn’t bad-looking, either.

I don’t know if it was intended, but Cary Elwes made the women in the film seem like hags in comparison. Perhaps, this was his pinnacle (before Jigsaw got to him, or the excesses my friend Will noted in his review of Twister). I don’t think I enjoyed him in a role more than here. Who knew he was so dexterous with a sword? If there’s anyone else, besides André The Giant’s turn as Fezzik, that drew me to them, it was perhaps Manny Patinkin as the Spaniard Inigo Montoya. There wasn’t anyone more passionate than he.

Moreover, passion was the key ingredient of the film. For all of the fun taken with bending fairy tale propriety, the filmmakers never fractured it. Even as the grandfather (wonderfully played by Peter Falk) narrated the tale to his grandson (Fred Savage forever frozen in time at that cute age), he delivered it with the warmth of a doting grandpa. Love was at the core of the tale, framed nicely by these two. It should be said, author Goldman didn’t skimp on the darker, fervent aspects conveyed in the story.

If you recall, many of the old fairy tales could be pretty horrific in their own right.

As an example in the film, you see this with Inigo’s main drive in searching for the six-finger man who murdered his father. Avenging himself by the sword. The same Polydactyly-one gets to torture Westley for the sadistic thrill of it. Nice. Finally, Prince Humperdinck stunningly inflicted a massively painful death on the beloved hero, just because Buttercup dressed the male ego down as only a woman could. Just some good old fashion fairy tale fanaticism and fervor being brought to bear.

Bless ’em for keeping the kiddies up a night with those twists of the folk tale knife, I say.

The Princess Bride was one of those film adaptations that played with a convention, but ultimately reaffirmed it. Without too much dismay from the audience. The film enjoyable as hell, especially if you’ve seen it enough times to repeat the endlessly quotable dialogue author William Goldman is eminently known for. Besides, it had a subversive style that pushed a few boundaries, yet firmly located within the context of the fairy tale genre.

I mean “The Pit of Despair” and “The Cliffs of Insanity”, along with true love conquers all? It’s “inconceivable!” Honest-to-goodness, for the longest time my daughter refused to watch this film, unlike her older brother. This time however, for the purposes of my review, we talked her into joining me in my umpteenth time of viewing this classic 80s film. Naturally, she loved it by the time our leads rode off for their the most pure kiss. Of course, her mother still hates the film. I wonder why that is?

Grandson: “Grandpa, maybe you could come over and read it again to me tomorrow.”
Grandpa: “As you wish.”

The Disc: the Blu-ray Disc for the film arrived in 2009 and was easily the best rendition, so far. I say that because, outside of the Sam Raimi’s Evil Dead series, the studios have milked The Princess Bride (and the buying public) with a number of disc versions out there. I’ve counted (1) the original barebones DVD, (2) the first Special Edition (the one I had previously), (3 & 4) the Dread Pirate and Buttercup editions (same disc, different DVD covers), and (5) the 20th Anniversary edition. The sixth delivered the best combination of picture, sound, and with all of the extra features from the previous discs.