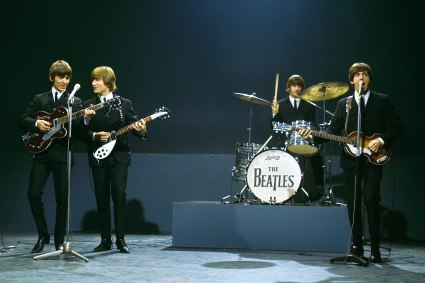 Ever since I began reading books about my all-time favorite group, have searched out for those that didn’t exactly regurgitate the same stories. Or, if they did, added something new or took a different approach with dissecting The Lads and their impact. Harder than it looks as so many have taken on this subject with varying degrees of success and scope through the decades since their debut. This year decided to try something different since I had little time to read.

Hence, two svelte audiobooks took center stage by the end of 2021. Each centering on not only on The Beatles, but a pair of locations outside of their home turf of Liverpool that impacted on them as a group and individually. Naturally, they are both on this side of the pond, but pretty much polar opposites in their geography, climate, and lifestyles: New York City and Los Angeles. Both hosted tour events that became iconic but innately drew each of the Lads into their midst.

The Beatles in Los Angeles – Yesterday, Today, and Tomorrow

Now it must be said, both are very short tomes for each of their subjects. The Beatles Play Shea comes in at a scant hour and 38 minutes, while The Beatles in Los Angeles is two hours and twenty-two minutes. The former was released five years ago, and the latter just this month, on 6 December 2021. Each cost little or was included with your Audible account for free, which is a nice touch by this prominent audiobook distributor.

That said, both make for quick and discerning listening on a very selective subject, if you don’t have a lot of time, a fleeting attention span, and/or have little prior knowledge of the events detailed in each.

These would be mere footnotes compared to something like Mark Lewisohn’s epic Tune In volume if one would care to go that route. But that’s not completely fair, either. The authors weren’t going for that — just covering a subject they, and hopefully, their listeners, would enjoy (re)experiencing in a short binge or peak of interest. Lastly, each of the locations showcased, besides being major cities in the U.S., has had a distinct impact on the music scene since the 20th century. 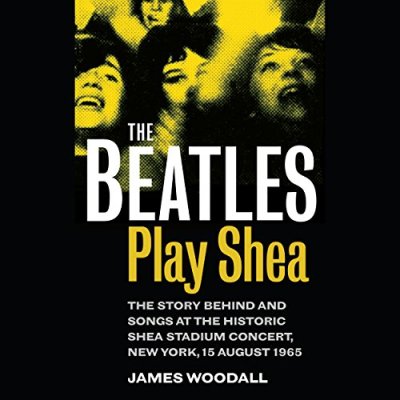 Author James Woodall, interestingly enough, takes a different tack in examining the momentous concert that was a music milestone a year after The Beatles played on the Ed Sullivan show. It was their third tour of North America, which took nearly a year in the planning, yet the author spends a good amount of time examining what the band had done, or surmised, prior. His analysis of their talent, albums, and songs was somewhat intriguing, but you sensed the Shea concert side was a bit lacking.

Still, there were gems scattered about that made this a decent listen: the chapter about the legendary promoter Sid Bernstein was informative and gave a sense of the time in music circles circa ’65. The ins and outs of the band, and the people desperately trying to gain their attention during the whole event, was another facet worth noting. Still, one wished the author would have stuck more to the Lads on New York City soil. Not the best on the subject, but delivered — just not often enough.

The Jeremy Louwerse and Tom Weitzel effort was better in its coverage since the audiobook1 could put out a much larger net. The “in Los Angeles” whereabouts, like the sprawling basin it encompasses, examined the interactions of the group together, and individually, could and did partake in. From major concert events to intimate interviews of those who shared the limelight, along with some nifty personal details. The Yesterday, Today, and Tomorrow moniker is more fitting compared to Shea.

Plus, since both authors are themselves television and Hollywood producers of some renown, they could and did share their experiences right along with the city’s history with the legendary group.

Certainly, the attention grabber was the book’s initial story of their first Hollywood Bowl appearance in 1964 and how it almost didn’t come to be. But must say Paul’s later concerts at Dodger Stadium (2019, which reunited onstage with Ringo for a Beatles classic rendition) and the one at the more intimate Amoeba Records store setting in 2007, the other highlights. Hell, there’s more than that here, but it’s best for the reader/listener to discover those themselves.

Narrated more than proficiently by author/producer Jeremy Louwerse himself.

The Beatles Play Shea and The Beatles in Los Angeles, being relatively small tomes released by Audible in audiobook format, are lacking in length, individually. And while other books have examined The Beatles in these distinctive locales to a more sumptuous extent, their authors’ enthusiasm was infectious2 for this audiobook listener. Still, even the smallest of tidbits found within, as long as they’re choice to those of us still caught up in Beatlemania, should find them alluring.

While the audiobook set in NYC is a bit too thin overall, neither is exactly something you can get entirely lost in. Yet, if you play these back-to-back, one can get mesmerized all over again at what occurred decades ago for fans in the cities that command their coasts whenever they hosted The Beatles. Even if it’s just for a few hours.