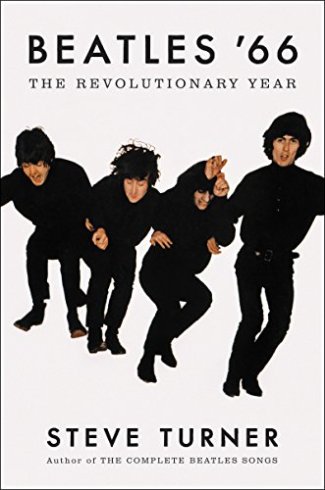 Given that it took some time, and a toll, to finish You Never Give Me Your Money by Peter Doggett this year, needed something to refresh the palette. Bring back a bit of the lost gleam to my all-time favorite group. Luckily, my lovely bride no doubt sensing my despondency provided just the right tonic to resuscitate the joy and wonder instilled at age 10. Gifting something new by the author of The Complete Beatles Songs and Trouble Man: The Life and of Death Marvin Gaye, Steve Turner’s…

Perhaps not erasing the bitter drama of the post-Beatles breakup inasmuch offering an intriguing look back at an momentous time that brought them creative triumph. This done despite expectations being thrust upon the group by press, critics, and their fans. The irony for readers and long-time followers (who know what’s coming) is witnessing the seeds of what drove their musical urges ever upward, broadened their perspective, while sealing their legend and eventual split.

“The year that changed everything for the Beatles was 1966—the year of their last concert and Revolver, their first album of songs not intended for live performance. This was the year the Beatles risked their popularity by retiring from the tour circuit, recording songs that explored alternative states of consciousness, experimenting with avant-garde ideas, and speaking their minds on issues of politics, war, and religion. It was the year Americans burned their records after John’s explosive claim that the group was “more popular than Jesus,” the year they were hounded out of the Philippines for “snubbing” the country’s first lady, the year John met Yoko Ono, and the year Paul conceived the idea for Sgt. Pepper’s Lonely Hearts Club Band.” ~ from the Beatles ’66 back cover

Quite an remarkable year for an equally likewise decade. Each piling on the next with something new, life-changing, with ramifications for those living it and who’d follow. The Sixties and The Lads in parallel, and in stereo, seemingly. Chronicled by the English music journalist, biographer, and poet who introduced the proceedings with a nuanced perspective of late-1965, primarily for those who weren’t there, before marching headlong into the pivotal cycle month-by-month.

As this was my twelfth year while all this was going on, some of what happened apparent to me and other young Beatles fans. Except, like an iceberg, so much more lay below the water line. Steve Turner’s book, by concentrating so thoroughly on this single year, dove deeper than most of the group’s abundant biographies with a clear purpose in mind. For one who knows the stories behind each of the Beatles songs, framing the renaissance that spawned the focal Revolver LP and more.

“We were all on this ship in the sixties, our generation–a ship going to discover the new world. And the Beatles were in the crow’s nest of that ship.” ~ John, 1974

Given the change coming, the cover photo used for Beatles ’661 offered an interesting contrast for readers before and after taking in Turner’s annals. The clean-shaven foursome, wearing identical clothing and mops, frozen in a staged publicity shoot, soon to be in the rearview. The carefully crafted image of a vibrant young pop group in lockstep proffered by Brian Epstein and EMI studios to this point soon to be upended. Surely, as soon as the book opened, like someone swiping left nowadays.

Should be said, a few of stories of what occurred in 1966 have been covered elsewhere, in articles, other books and interviews. Be that as it may, Turner elaborated on how a tumble of personal influences and experiences (some drug-induced) kicked the Fab Four off what was an established pop group track. The dawning of a new age, career-wise, reflected on what would be their final tour and in the studio. Morphing the dynamic of music bands, their handlers and fans, from this day forward.

The book a compulsively compelling catalog for any Beatles fan, or even if you’re not an admirer of the Liverpool lads (cough…Adrian McKinty…cough)2. There’s enough pop culture history represented, along with other fabled contemporaries (Bob Dylan, Bertrand Russell, Mick Jagger, etc.), to satisfy those curiously delving into this particular tide pool of music history. Like Nature, The Beatles quite good at combining new and old elements, spawning something that hadn’t been before.

“The Beatles themselves were more realistic in their ambitions. They wanted to stretch in order to discover the boundaries of their skills but not to overextend themselves. Paul was curious to find out whether he could write instrumental music for film, George was challenged by the possibility of composing within the Indian tradition (rather than a pop version of it), and John wanted to know if he could act the part of anyone one other than John Lennon. Nothing would be lost if they failed in these side projects, and the chances were they would learn something new that could later be put to good use in the context of the Beatles.” ~ ‘September’ chapter, page 315

To say my relationship with the good ship Yellow Submarine needed buoying may be overstating it. Reliving in exhaustive detail the monumental breakup of the group in print did skew my outlook somewhat. Still, Steve Turner’s deep look behind scenes at the creation of Revolver and the beginning of the Sgt. Pepper’s LPs in a central year put the needle back into the groove for me. Worth the read for its fascination of The Lads and an appreciation of their music in a revolutionary time.

As opposed to Peter Doggett’s tome, Beatles ’66 also released by Blackstone Audio on audiobook format in March 2018. And while the listener missed out on the period photos (including the infamous “butcher” artwork used in the UK ad for the “Paperback Writer” single) and detailed appendices and index included on the Ecco hardback, it is a marvelous production. At 12 hours 14 minutes length, it’s not too lengthy an experience to take into account and enjoy.

Besides Blackstone expertise in delivering on audio, they matched an exemplary narrator to the subject matter. There’s a reason someone like Simon Vance gets these calls, and awards. His vocal skills and storytelling ability have made him much sought after. As opposed to his dramatic flair with fiction titles, he’s equal to the more straightforward nonfiction variety, too. Here capturing the various personalities quoted on the page and vocalizing them more than well.

The different speech patterns of John, Paul, George, and Ringo not so much imitated, yet keenly defined for the listener throughout. At no time was the audiobook narration faulted by a vocal misstep or misinterpretation. Vance brought the troupe and pages to life and placed the listener in whatever the locale the foursome traveled3 during this hectic, transformative year that changed their lives. The entire audio production measured up to the content superbly.