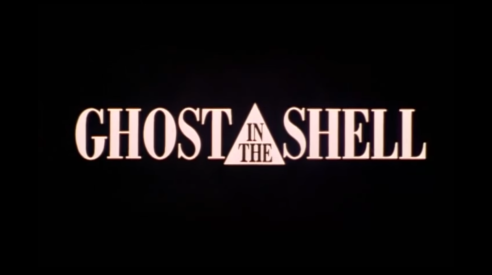 No matter where the viewer comes down on the 2017 American remake, its choices on story and casting, which arrived in U.S. theaters last week, the impactful brilliance of the 1995 British-Japanese science fiction anime film, Ghost In The Shell (Kōkaku Kidōtai Gōsuto In Za Sheru), was never going to be overshadowed. Based on the manga of the same name by Masamune Shirow, the immersive visuals of this animated Mamoru Oshii-directed adaptation remains influential1 as it is stunning.

Having re-watched this for the umpteenth time thought to give its captivating opening title sequence an appreciation.

Before their arrival, though, much like Blade Runner, the film’s cold open sets the future in place. Captions explain the world now intensively data-oriented, and humans enhanced to an extent they directly connect to the network. As well, advanced cybernetic technology has evolved crime and counter-espionage to the point it is subject to sophisticated hacking by various actors on the interactive web. To prevent this, Section 9 and its mix of augmented humans and cyborgs, protect Japan’s New Port City.

Where we find its assault team leader, Major Motoko Kusanagi, high up along the cityscape. Her cybernetic abilities interacting with the digital and analog realms in preparation for the task ahead. Lying in wait to spectacularly assassinate a foreign diplomat and prevent a programmer’s defection as Ghost In The Shell‘s striking credits begin to blur what is it to be human.

Rupert Sanders’ film recreates much of the original’s for its titles sequence, updating the CGI effects, but in slightly different context

One only has to witness the blending of identity and technology at the start of the sequence to know nothing like it had come before. Tron, perhaps, a precursor to the computer visuals as the main title comes online. Abruptly cutting to an image of a computer-constructed cybernetic body being assembled…the visual corollary. A birth, as it were. With imagery of a cerebrum scanned into a cyberbrain — mechanically encasing consciousness — allowing direct access to “the net.”

The commencement of the “digital rain” in the sequence, the computer code quickly flying across the screen2 marking the entrance of each movie credit from this point on, another of the film’s watershed moments. The combination of cel animation, computer graphics, and textured audio amplifying each sight and sound to an unheard degree, care of the filmmakers’ deft distillation of the material. A standout, clearly, and a breakthrough in cinema, no matter if done via animation.

That fabrication of being as the titles blink their way passed done in technically loving, eye-catching detail as we follow the process through to its final product. Intimately…few things are as bare like birth itself. To say the naked torso here voyeuristic and titillating would be an understatement as the female cyborg attains an appealing awakening. A rendering of form as she rises through liquid layers bestowing warmth (and derma); melding the mechanical into something more. Human.

The penultimate segment fashions the figure twirling in a fetal position before this embodiment of cybernetics and soul, the “ghost” intrinsically inhabiting this “shell”, moves to a final blow dry and boot. Symbolic and significant, surely. For the astonishing opening titles sequence simply a remnant of the “Major’s” backstory. How she came to be as her eyes rouse from doubtless battery sleep to a darkened apartment. All in answer to Philip K. Dick’s most perplexing question3, methinks.

Prophetically, this dreamy vision sleight of hand; giving a glimpse to a futuristic meshed world by way of aroused visual stimulus. Yet, the credits portend whatever cyberpunk fate on the horizon not so much a birth, but a marriage. A dramatic fusion intoned by composer Kenji Kawai‘s haunting Ghost in the Shell theme, which pierces the sequence from the start with distinct beats and chorus. The noted movie, TV, and video game scorer rendering the topmost textual layer upon the proceedings.

The 2017 live-action version reuses Kawai’s theme for its end credits sequence, with less effect as a result

Like the coalescence on display, Kawai created a stark, minimalist accompaniment that in essence hinted tunefully the wedding of man and machine. Taking classical Japanese folk music, a traditional wedding song whose wistful chorales meant to dispel all evil influences from the nuptial4, and marrying it to Bulgarian harmony. Like the titles and imagery, an amalgam hard to forget once heard. Little wonder fans and critics alike consider this cyber-tech thriller one of the greatest anime films of all time.