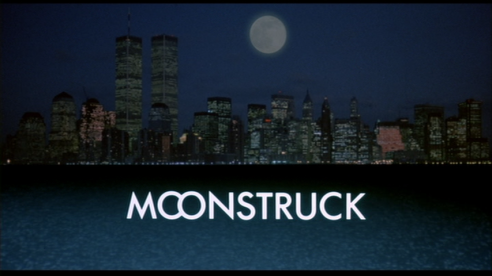 It goes without saying that I can be passionate in my views on film…with everything I care about, for that matter. Especially so with the love of my life and the mother of my children. That my first two movie dates with my future bride involved decidedly heartfelt motion pictures, albeit across two very divergent genres, is simply the stuff of synchronicity. The first an underappreciated war film, the second a wonderful romantic comedy, aptly named Moonstruck, where…

“…like the character of Ronnie in the film, I could feel the world around me shifting when I was with her this time.”

Having watched this again last week, once more with the person I fell in love with so long ago next to me, thought to give its relatively straightforward opening title sequence a long overdue appreciation.

First off, any film that honestly displayed the twin towers of the World Trade Center is bound to gather thoughts and emotions of 9/11 and somewhat marked by the viewer in this day and age. No getting around it. That said, though, how could Norman Jewison and DP David Watkin not have opened Moonstruck with the two unspoken characters of the film: the moon and New York City. The former shining down on the latter’s distinctive skyline. Romance for most still one that involves a couple coming to an inevitable pairing.

In fact, one could see the eminent duo edifices as symbolic stand-ins for the lovers in the piece. More illustrative, after Cher’s and Nicolas Cage’s credits make their appearance against such a dramatic backdrop, the movie’s title (the only animated one of the entire sequence by the way) wriggled into view. Much like Loretta and Ronny writhing in and out of bed later, it gathered the eye and stirred something. Twosomes, one of the alluring aspects of the film and reflected throughout, emphasized in this opening scene.

Besides, note how close one of those Os in the Moonstruck title is snuggled up next to the other, if you don’t believe me.

From then onward, Watkin’s camera will unmistakably mark the route of another cold December day through a few of the landmarks and boroughs that distinguish NYC; coinciding with our heroine’s journey. Signified by her too young widowhood, “A bride without a head!”, living out of the rest of her life with her parents in Brooklyn’s Italian-American enclave of the late-’80s. The sequence visually linking The Met‘s preparations1 for the opening of Puccini’s La bohème to the reawakening of Loretta’s heart and prospects.

While the credits themselves are staid compared to other more spectacular ones, they do their job as well as Loretta’s bookkeeping keeps her fellow Brooklynites heads above water. Efficiently weaving and foreshadowing elements that will bring the love of her life, “A wolf without a foot!”, into the picture. Part of what makes it all worth living, along with food and family. The credits culminating cleverly on the director’s, which centers on the gentleman in his final repose at the location our lead has been on her way to.

If all these film facets were by themselves, alone, Moonstruck‘s would have been a competent, if perhaps run-of-the-mill, titles sequence. Not the case here, I’d argue, as the Canadian filmmaker’s opening steadfastly held to the motion picture’s celebration of love, life, and food by means of its final and pitch perfect pairing. The entirety of this three-minute plus credits course, and what ultimately gave the cinematic progression its life blood of verve and passion, was the accompanying song, That’s Amore2.

No doubt about it.

“Amore” is Italian for “Love”

Wasn’t even born when this number first charted in 1953, but still I could understand why it became a major hit and signature song of Dean Martin‘s. Composed by Harry Warren and Jack Brooks for the Martin and Lewis comedy, The Caddy (1953), its lyrics tailor-made for a love story such as this. A superb needle drop moment as it described love the way they do in southern Italy. Passion-filled, with Dino crooning the desire to his favorite traditional foods3, and moreover poking fun at the stereotypes prevalent back then4.

A quirky romantic song sung with an engrained smoothness and warmth that remains palpable to this day, as does this marvelous match-up with the movie Moonstruck in every way imaginable.